Italy Wins Another Friendly Against China Leading to World Champs. 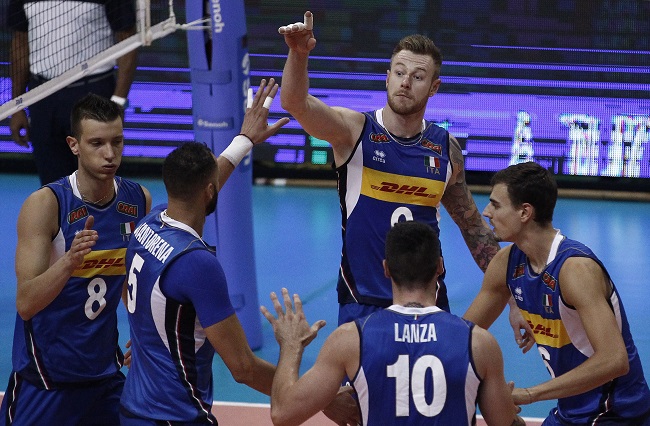 Ivan Zaytsev led Italy with 16 points as they beat China for the second day in a row. Italy will start the World Championships on Sunday against Japan in Rome.  Current Photo via Italian Volleyball Federation

As with yesterday’s match, Italy started off slow against China before bouncing back to get a 3-1 (27-29, 25-18, 25-21, 25-21) win in front of 3,600 spectators at the PalaEstra in Siena. This is the last friendly match for the Azurri before the curtain raises on the 2018 FIVB World Championships. Italy will open the tournament on September 9th against Japan in Pool A at the Foro Italico in Rome.

Italy got stronger in attack as the match progressed. Though they fell to a 6-2 deficit in the first set, they were able to push China to a 27-29 finish. Their success rate in attack finished at 68%, up from 54% in the first set. Ivan Zaytzev led the charge for Italy with 16 points. Filippo Lanza was right behind Zaytzev with 14 points. The other outside hitter, Osmany Juntorena, followed up his 16-point performance yesterday with 13 points on Thursday. Simone Anzani led the match in the middle for Italy with 8 points. Simone Gianelli started the match at setter.

In the fourth set an entire new lineup was utilized, giving every player on the bench time on the court. Gabriele Nelli and Luigi Randazzo led the charge for Italy in the final set with 6 points each.

“Their departure a bit surprised us, but I liked how the guys stayed focused and playing ball on the ball put the race on the right tracks, winning deservedly,” said Gianlorenzo Blengini. “Beyond the victory, which in general is always a pleasure, we have seen good things alternated with others to improve. The merit is also of China which is a level formation. We are all focused on our goal, aware of the difficulties that await us. It will be a long and full of pitfalls tournament, it is a World Championship and it would be strange if it were not.”

Italy’s setter, Simone Gianelli said, “Even tonight I saw good things, we all know that there is always the possibility to improve, but I think that getting to the World Championships with a bit of wind in the stern will not hurt us. We all have our feet firmly planted on the ground and we know what we have to work on, but at the same time we are aware of our value and the value of the shirt we wear. We’ll see. After many hours spent in the gym, we can not wait to start.”

Jiang Chuan led China again with 12 points in the match.