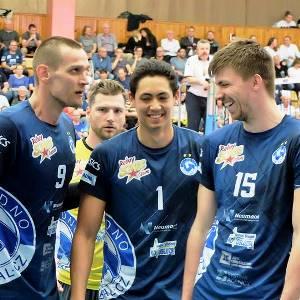 Matt West, two-time AVCA All-American and All-MPSF as a setter at Pepperdine, will be playing for a new team in 2018-2019. He will be heading to Finland to play with Hurrikaani-Loimaa. West even took part in a friendly match last week against Akaa-Volley.

Hurrikaani finished 4th place in the regular season of the Finnish Mestaruusliiga. They then made it to the finals of the playoffs, losing to VaLePa 4-0 in a best-of-7 series. Hurrikaani will take part in the CEV Cup in addition to the domestic competitions in Finland.

Initially it was reported that West will be staying in the Czech Republic to play for Brno. He was announced by the club back in August. West spent the last season as a part of the Kladno Volejbal CZ team that finished 3rd in the regular season of the Czech Extraliga and reached the finals of the playoffs.

This is West’s fourth squad in four years as a professional. After he graduated in 2015, he played for SWD powervolleys Duren in the German Bundesliga. The next season he spent at Abiant Lycurgus in the Dutch Eredivisie and the CEV Champions League. Just last year he moved over to the Czech Republic to play for Kladno.