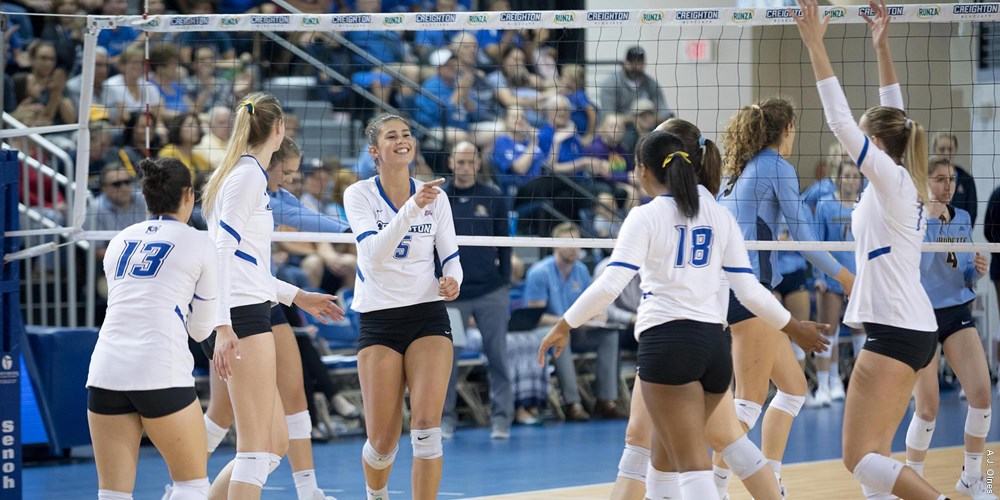 In Marquette’s last realistic chance at the Big East regular season title, Creighton knocked off the Golden Eagles 3-1 on Friday in Milwaukee.

In a battle of the two best in the Big East, the Creighton Blue Jays re-asserted their spot at the top of the heap with a 3-1 win over Marquette. The two teams already faced-off this season, in September, where Creighton won 3-0.

“I thought it was two good teams going at each other,” said Creighton coach Kirsten Bernthal Booth. “It was really fun to be a part of. Our offense was good tonight and we definitely dug some balls which was good to see.”

Jaali Winters came out swinging iwth 9 kills and 6 digs in the first set en route to 25 in the match (2 errors, 52 swings, .442 hitting). That ties for her season-high in kills, matching the 25 kills (though hitting only .305) that she had in the opening match of the season against Kentucky in 5 sets. Winters also led the team with 19 digs.

“Jaali was so smart with where she was attacking,” said Booth. “They’d put four hands up and she found edges of block to go after, and defensively did a good job as well. I’m happy that everyone contributed to this win and that was great to see.”

The Big East’s most surprising team, St. John’s, stumbled early against Butler, but roared back to win the last 3 sets and remain in 3rd place in the conference. This marks the first time that St. John’s has ever won the season series with Butler: Butler was 8-2 against St. John’s entering the season, and pushed them to 5 sets in the teams’ first matchup of the season.

“A fantastic comeback win after dropping the first set on the road at Hinkle Fieldhouse. We were able to regroup and find our rhythm and get a big win,” St. John’s head coach Joanne Persico said. “Butler has a lot of offensive weapons so I was glad we were able to stabilize them.”

Kayley Wood had just 3 kills and 2 errors in the first set for St. John’s (which actually led the team), but she erupted the rest of the way for 15 kills. That includes 2 kills in the last 3 points in set 3, 4 kills in the first 15 points of set 4, and the final point of the match via one last kill.

Villanova hit .226 and held Georgetown to .093 in a surprisingly-one-sided battle of mid-conference teams. Nobody in the match hit in double figures, but Clare Delaplane had 9 kills, 2 block assists, and 1 ace for a match-best 11 points.

Xavier knocked off Seton Hall 3-1 on Friday led by a double-double from senior Laura Grossman. She had 12 kills and 15 digs. Seton Hall had 3 players in double figures: Abby Thelen had 16 kills, Caitlin Koska had 14, and Haylee Gasser had 13.