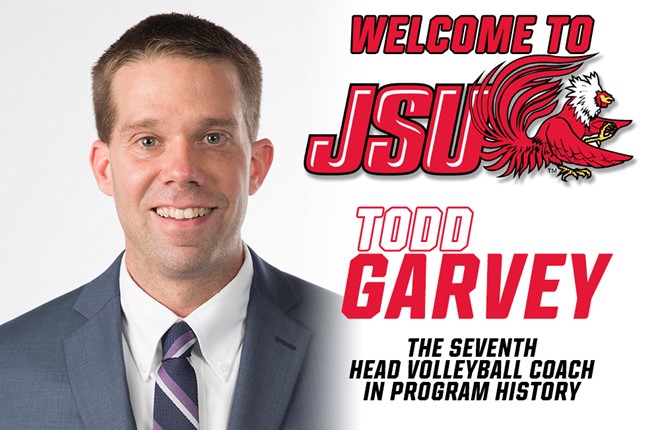 Jacksonville State has announced Todd Garvey as their new head volleyball coach for the 2018-2019 season, which fills the last (known)... Current

Jacksonville State has announced Todd Garvey as their new head volleyball coach for the 2018-2019 season, which fills the last (known) remaining Division I head coaching position. The position opened relatively-late in the hiring season when the school fired Terry Gamble in April.

Garvey is the 7th head coach of the indoor volleyball program at Division I Jacksonville State. He comes to the program from Lipscomb University, where he is the associate head coach. He has prior stops as an assistant at Purdue (as a volunteer assistant) and Ohio University.

Garvey’s most notable success as a coach was at the high school level, where he was the head coach of Mercy Academy in Louisville from 2007-2014. In that time, he had an aggregate 320-41 record, winning 3 state championships and a PrepVolleyball.com mythical national championship in 2014 after a 40-1 season. He was named the 2008 AVCA and USA Volleyball Magazine National Coach of the Year, and was an AVCA 30 Under Thirty Award recipient in 2009.

Prior to taking over the Mercy Academy program full time, he served as an assistant there under his father Ken Garvey. He also coached with the MAVA club program in Louisville, including leading his 13s team to the USA Volleyball Junior Olympic title. He later worked with the Union Volleyball Club.

Last year, as a full-time assistant at Lipscomb, Garvey helped the program to a 16-13 record. He takes over a Jacksonville State program that finished 23-13 overall record and 9-7 conference record that was 5th in the regular season. They lost to #3 Murray State 3-1 in the first round of the Ohio Valley Conference Championships.

Gamble was also the head coach of Jacksonville State’s beach volleyball program. No announcement has been made as to who will take over the beach program.