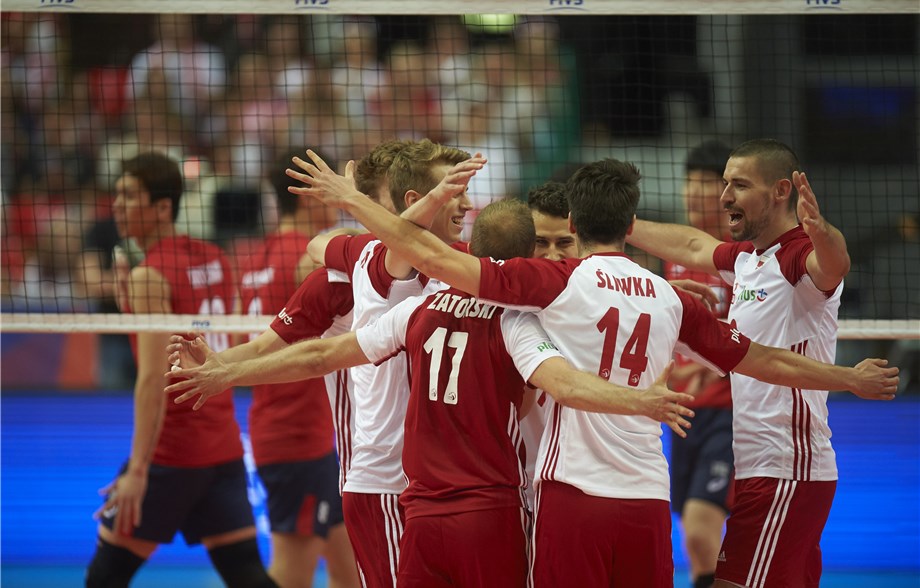 Russia and Poland each turned in 13 blocks in a pair of Day 1 sweeps to open Volleyball Nations League Pool 3 play in Katowice.  Current Photo via FIVB

A dominant blocking effort and balanced attack were key in lifting Poland to a sweep of South Korea at home in Katowice to open VNL Pool 3 play on Friday.

Jae-Duck Seo was the top scorer for Korea, notching nine points with eight kills and an ace. Gyeong-Bok Na and Jiseok Jung added eight points apiece. Jung downed eight kills, while Na chipped in six kills, one block and one ace. Korea used 13 of its 14 points in the match.

Poland jumped ahead 12-7 in Set 1, but Jung sliced the margin to three before Konarski capped the set at 25-20 with his fifth point of the day.

A 5-1 advantage in Set 2 was too much for Korea to overcome, although the team got close at 13-10, before the Polish side diversified its offense and won its second challenge of the set en route to a 25-18 win.

The Koreans played themselves out of Set 3 with too many errors, while Szalpuk racked up five kills and three blocks on the way to the 25-21 win to secure the sweep.

Three Russian players managed double-digit scoring efforts, but it was the team’s blocking prowess that put its match with Canada out of reach on Friday.

Russia outblocked Canada 13-2 in the victory, while also boasting a 4-1 edge in aces and committing just 11 errors to its foes 16. The teams were level offensively with 43 kills apiece.

Canada led by as many as three in Set 1, going up 10-7 behind Vigrass’ attacking. Muserskiy served up an ace and added a kill to pull Russia within one at 18-17. Kliuka put Russia on top briefly at 20-19, but the team trailed 21-20 moments later. Blocks by Vlasov and Anton Karpukhov helped the Russians to the 26-24 win.

Russia scored five of the first six points of Set 2 and went on to a 10-6 advantage before cruising to the 25-14 win.

Canada led by one at the first technical timeout of Set 3, but saw that fade into an 18-12 deficit, including an ace off the tape. In the end, three Canadian miscues sealed the 25-19 Russian victory.