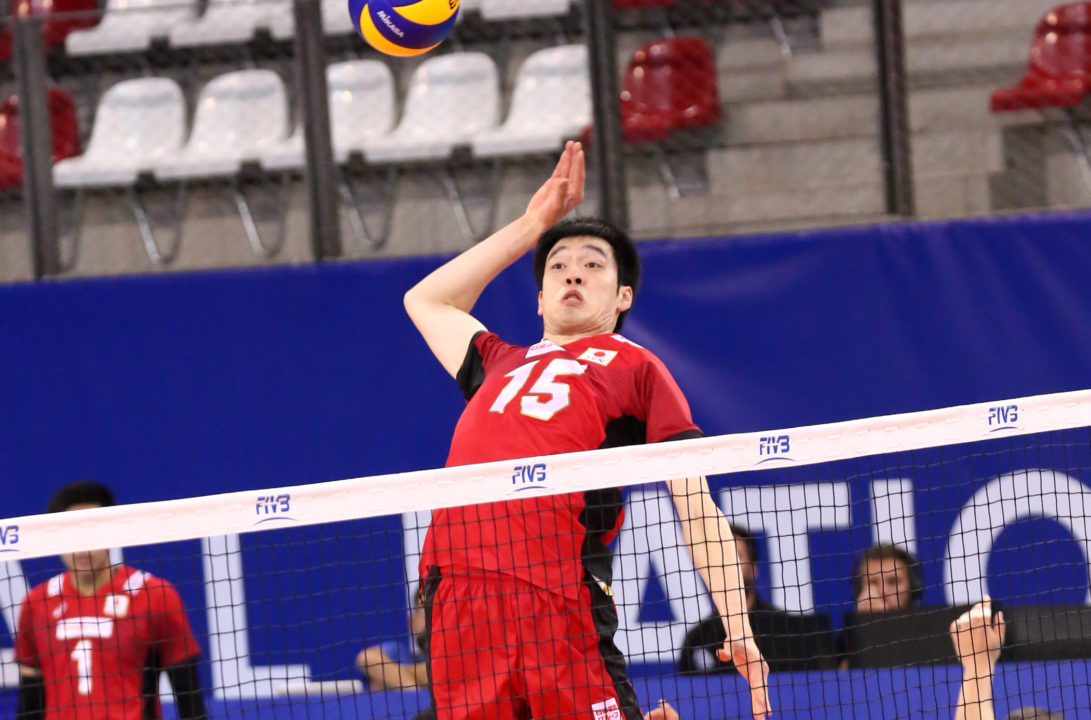 Five players scored in double-digits as Japan rolled to a four-set win over Australia to open VNL play.

Haku Ri was the top scorer in the match with 18 points (11 kills, 3 blocks, 4 aces) for Japan. Masahiro Yanagida (16), Yuji Nishida (15), Tatsuya Fukuzawa (11) and Akihiro Yamauchi (10) rounded out the scoring. Nishida put down a team-best 14 kills, while Yanagida added 11 and Fukuzawa and Yamauchi chipped in 10 apiece. Yanagida also served up four of the team’s nine aces.

Nehemiah Mote led the way for Australia with 16 points (14 kills, 1 block, 1 ace), while Thomas Hodges followed with 11 (10 kills, 1 block) in just over two sets of play. Lincoln Williams turned in eight points, including six kills, in the first two stanzas, while Jordan Richards accounted for four kills and a team-best three blocks.

Set 1 was just a one-point game midway through with Japan holding a slight 12-11 lead. The Japanese then scored four straight to pull away en route to a 25-18 win.

The teams were knotted at 10-all in Set 2 before Japan called timeout and regrouped leading to a 6-3 scoring run. The Japanese closed out the 25-15 win with six straight points.

Hodges started Set 3 and set the table for an Australia comeback with a 7-4 lead. Japan turned a three-point deficit into a 17-16 advantage, before Hodges and Mote teamed up down the stretch to give the Aussies the 25-23 win and extend the match.

Yanagida took over in Set 4, giving Japan an early four-point edge. Ri sprung into action as well, which made it 16-8, and put the match out of reach.

France racked up 23 more kills than its Iranian counterparts, but had to overcome 30 miscues in a four-set home victory.

Earvin Ngapeth and Jean Patry provided a 1-2 punch for the French with 18 and 17 points respectively. Ngapeth downed a match-high 18 kills, while Patry notched 16 putaways and a block. Nicolas LeGoff chipped in nine points, including a team-leading four blocks. Thibault Rossard and Barthelemy Chinenyeze supplied eight kills apiece to aid a balanced French attack.

France took an 8-4 lead in Set 1 and held on for the 25-20 win despite several Iranian rallies that cut the margin to two. Ultimately, Party pounded down the final kill.

It was battle down the stretch in Set 2 as Iran turned a 23-22 deficit into a set-point try with stout blocking. In the end, Seyed and Kolakovic sealed the 26-24 win to even the match.

France recovered and jumped ahead 8-5 in Set 3, but Iran hung around, pulling within one at 19-18. Chinenyeze came through with a few kills to push the French to the 25-20 win.

It Set 4, it was the French who seized the early advantage, leading 8-4 at the first technical timeout. Up just two at 14-12, France put the match out of reach with a 6-0 run.