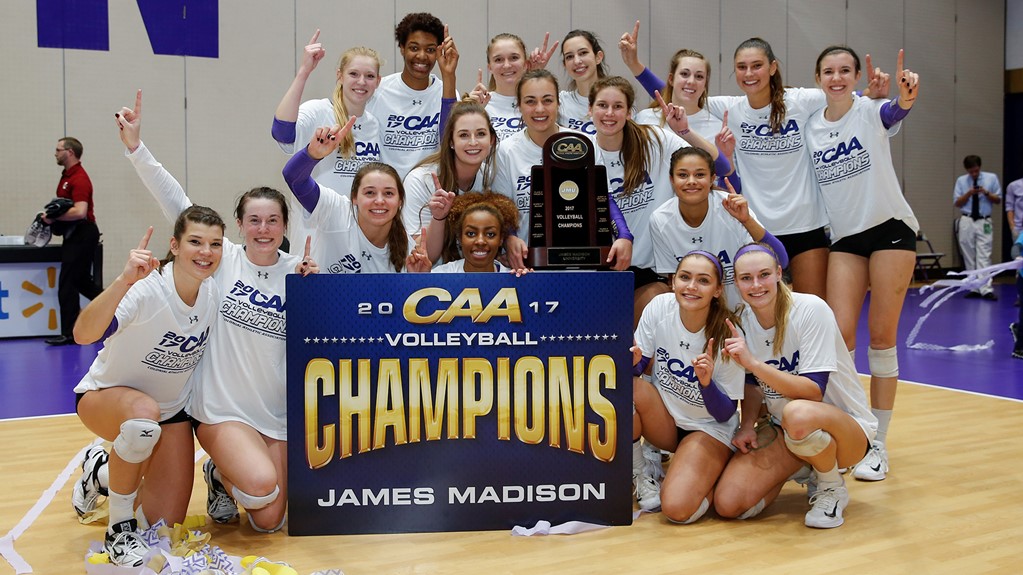 The Dukes had to beat each of the tournament’s top 2 seeds to win their second-straight CAA title, and they did so in spectacular fashion – sweeping both #2 Towson and #1 College of Charleston on back-to-back days (after a rocky 3-2 stsart over 6th-seeded Elon in their tournament opener).

In a championship match with no aces (and only 2 service errors per team), there was one area of separation –  James Madison block. They out-blocked College of Charleston 12-4, and forced a number of other errors to hold CofC to just .152 hitting percentage. M’Kaela White had 8 block assists for James Madison, while Sarah Martin had 3 solo blocks to go with 2 assists.

On offense, freshman Bryn Recker had a big day for James Madison – with 19 kills and just 3 errors for a .410 hitting percentage. Playing out of JMU’s two-setter system, while their two middles Taylor Gail and White had 7 and 9 errorless kills, respectively, resulted in better-than-.500 hitting percentages for both.

JMU earned its second consecutive, and fifth overall, CAA title in program history. This is the second time in program history the Dukes have earned back-to-back titles, matching the 1999 and 2000 squads. The victory was the fifth straight by the Dukes and pushed their overall record to 23-5, the most wins by any JMU team since 1999.

For three straight years, the CAA title match has ended in three sets. This is the fourth time in the last 10 years that the No. 3 seed in the tournament has won the title. The Cougars were the regular-season champions and the top-seed in the tournament, falling to 27-5 overall.

MATCH NOTES
The Dukes were a force on the attack as junior Bryn Recker led all players with 19 kills on 39 attempts, only committing three errors to hit .410 for the match.
Middle blocker M’Kaela White contributed nine kills with no errors on 17 attempts to give the sophomore a .529 hitting percentage.
Taylor Gail followed a huge semifinals performance with seven kills on 13 attempts and no errors for a .538 clip in the championship match.
Senior defensive specialist Taylor Austin held down the backline with a match high 21 digs.
Sarah Martin and Tilbe Yaglioglu split the setting duties for the Dukes with 23 and 18, respectively.
The Dukes tallied 12.0 blocks to Charleston’s 4.0, led by White, who tallied eight on the afternoon.
Three Cougars ended the match with double-digit kills, led by Devon Rachel with 14.

QUOTING COACH STEINBRECHER
“I could not be more proud of our team, they played so well and played together this afternoon. They all have worked so hard all year for this, so to see all the pieces come together this weekend really made it fun to watch. Tonight, we are just going to celebrate this win and hit the courts again tomorrow as we prepare for whomever we may face in the NCAA tournament in a few weeks.”

ALL-CHAMPIONSHIP HONORS
With 26 kills and 19 blocks over three matches, sophomore M’Kaela White earned All-Championship team honors.
Leading the Dukes with 53 kills, averaging 4.82 per set, Bryn Recker joined White on the All-Championship squad.
Senior Taylor Austin was named the Most Valuable Player as the Ashburn, Va. product garnered 78 digs. Austin is the first libero to ever earn most outstanding player in a CAA tournament.
HIGHLIGHTS

UP NEXT
The 2017 Selection Show for the NCAA Division I Women’s Volleyball Championship will air on ESPNU on Sunday, Nov. 26 at 9 p.m. The First and Seconds Rounds will be held at 16 non-predetermined campus sites over Nov. 30-Dec. 2.

HARRISONBURG, Va. — Devon Rachel (Louisville, Ky.) recorded her second double-double in as many days to earn a spot on the all-tournament team, and Krissy Mummey (Hudson, Ohio) added 10 kills and three blocks as the No. 21 (VolleyballMag.com Mid-Major Poll) College of Charleston volleyball team fell to No. 3 seed James Madison in straight sets in the Colonial Athletic Association Championship on Saturday evening.

Rachel paced the Cougars with 14 kills and 11 digs, as Mummey added 10 smashes, three blocks, and a .429 hitting percentage. Kennedy Madison (Evansville, Ind.) chipped in 10 kills, as Allison Beckman (Apex, N.C.) dished out a match-high 37 assists to go along with seven digs and two blocks. McKala Rhodes (Charleston, S.C.) totaled 19 digs to move into sixth on the program’s all-time list with 1,417 career digs. Rachel and Mummey each garnered all-tournament recognition.

Bryn Recker led the way for James Madison with a match-high 19 kills to go along with eight digs, two blocks, and a .410 hitting percentage. M’Kaela White added nine kills and a contest-best eight blocks while hitting .529. Sarah Martin and Tilbe Yaglioglu dished out 23 and 18 assists, respectively, as Taylor Austin posted a match-high 21 digs.

The Cougars now await word on a possible at-large bid to the NCAA Tournament, which would come down during the NCAA Tournament Selection Show next Sunday at 9:00 pm. Stay tuned to cofcsports.com for more information as it becomes available.