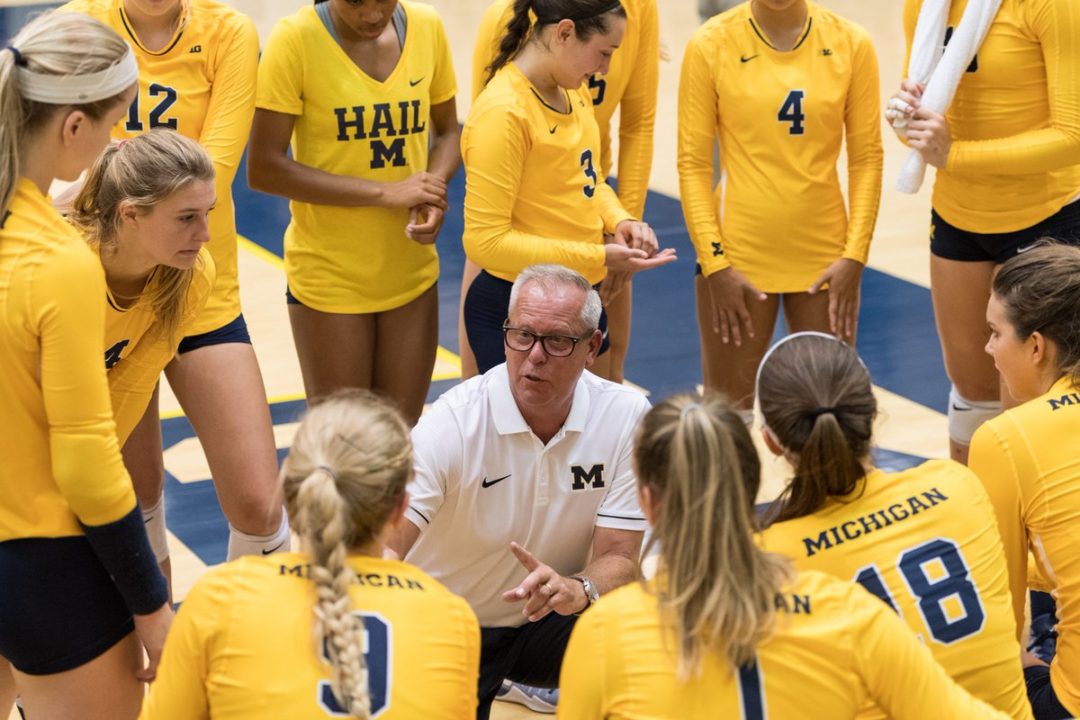 Michigan was led by junior outside hitter and Indiana native Carly Skjodt with a team-high 16 kills and a match-high 16 digs. It was Skjodt’s 7th double-double of the season. Senior Katherine Mahlke added 14 kills and hit a match-high .500. Sydney Wetterstrom added another 12 kills to go along with 4 digs and 3 blocks. Setter MacKenzi Welsh added the only other double-double for Michigan, dishing out 46 assists to go with 11 digs. Libero Jenna Lerg dug 15 balls and added 4 assists of her own.

Purdue had a familiar face lead the match in kills. Reigning VolleyMob player of the week Sherridan Atkinson led all attackers with 20 kills and hitting a team-high .302 against Michigan. She also filled the stat sheet with 9 digs, 4 blocks, an ace and an assist. Senior middle blocker Danielle Cuttino added 12 kills and was in on 6 of Purdue’s 11 blocks. Freshman outside hitter Caitlyn Newton added 10 kills. Setter Ashley Evans ran the offense by distributing a match-high 47 assists. Libero Brooke Peters added team-highs of 15 digs and 2 aces.

ANN ARBOR, Mich. — Three double-figure kill efforts and 12 team blocks propelled the University of Michigan volleyball team to its second straight win over a top-25 opponent on Saturday night (Nov. 18), as the Wolverines defeated the No. 15-ranked Purdue Boilermakers by a 3-1 score (23-25, 25-22, 25-22, 25-22) inside Cliff Keen Arena on Michigan’s senior night.

The win is Michigan’s first over Purdue since 2010, and marks the first set of back-to-back wins over top-25 opponents since 2015.

The night also marked the Wolverines’ last home contest of the regular season, and the Maize and Blue posted a 13-3 record during that time. After the match, Michigan (19-11, 9-9 B1G) honored its three seniors in Claire Kieffer-Wright, Adeja Lambertand Katherine Mahlke. The senior class finished their careers with a combined 49-16 record when playing in Ann Arbor over the last four seasons.

Junior outside hitter Carly Skjodt led Michigan with 16 kills and 16 digs, marking her seventh double-double of the season. Mahlke followed suit with 14 kills at a team-leading .500 attack percentage, and sophomore outside hitter Sydney Wetterstromtotaled 12 kills for her third straight double-figure effort.

Michigan’s defense was outstanding in the victory, as the Wolverines out-blocked the Boilermakers, 12-11. Michigan also had three players finish with double-figure digs, including 15 from junior libero Jenna Lerg and 11 from sophomore setter MacKenzi Welsh. From the front row, redshirt sophomore Cori Crocker led the Wolverines with five blocks, while Welsh added four. Welsh also finished with 46 assists for her ninth assist-dig double-double this season.

Purdue jumped out to an early 7-4 lead in the first set, but the Wolverines rallied to tie the score at 10 on a double-block from Kieffer-Wright and Welsh. Michigan then surged ahead for a 16-12 lead and a Purdue timeout, but the Boilermakers responded with a 4-0 run to tie the score. A double-block by Welsh and Crocker swung the momentum back in favor of the Maize and Blue, but neither team could maintain a lead and the score was tied at 22 late. Despite a big block by Lambert, the Boilermakers used a 3-1 run to clinch the first set, 25-23.

The teams traded points to begin the second set and the score was tied at 10 before a 3-0 run put Purdue up,13-10. Michigan then answered with a 6-1 run of its own, which included kills from Skjodt, Mahlke, and Kieffer-Wright. The Boilermakers inched back to tie the score at 18 and force a Michigan timeout, but a kill from Wetterstrom put the Maize and Blue back on top until a Wolverine attack error allowed Purdue to tie the score again at 22. Despite a tie score late, a .342 team-attack average was too much for the Boilermakers to overcome as a Purdue service error and back-to-back kills from Wetterstrom gave Michigan set two, 25-22.

With the match tied at 1 apiece coming out of the intermission, Michigan used the momentum from its set two victory to take an 11-6 lead in set three and coerce an early Purdue timeout. In spite of five kills each from Mahlke and Skjodt, the Boilermakers came from behind once again to tie the score at 20, and used back-to-back kills to take its first lead at 22-20. Michigan was unfazed, however, and used a 5-0 run to force a 25-22 third set victory.

The fourth set featured just two ties and one lead change, as the Wolverines dominated the final set of the match. Using a .391 hitting percentage and holding the Boilermakers to just a .088 clip, Michigan took an early lead on a kill from Mahlke and led by as many as seven before Purdue fought back to tie things up at 18. Despite a persistent Purdue squad, three timely kills by Mahlke forced a Michigan lead at 22-19, and the Wolverines remained steady in front of a sold-out crowd to earn a 25-22 fourth set win.

Ashley Evans set the offense to 47 assists to complement her five kills, five digs, a block and a pair of service aces. Brooke Peters and Jena Otec also contributed a pair of aces each as Peters led the defense with 15 digs. Otec added six digs while Azariah Stahl was the only other Boilermakers to join Peters with double-figure digs as she finished with 10 to go along with her four blocks.

The match was a tight one from the start as it saw 30 tie scores and 13 lead changes and both teams didn’t side out more than 60-percent of the time. Purdue gave itself a chance to win each of the three sets it lost as well as the second set was tied at 22, the Boilermakers led the third set 22-20, and Purdue was within one of the Wolverines in the fourth set as it trailed 23-22.