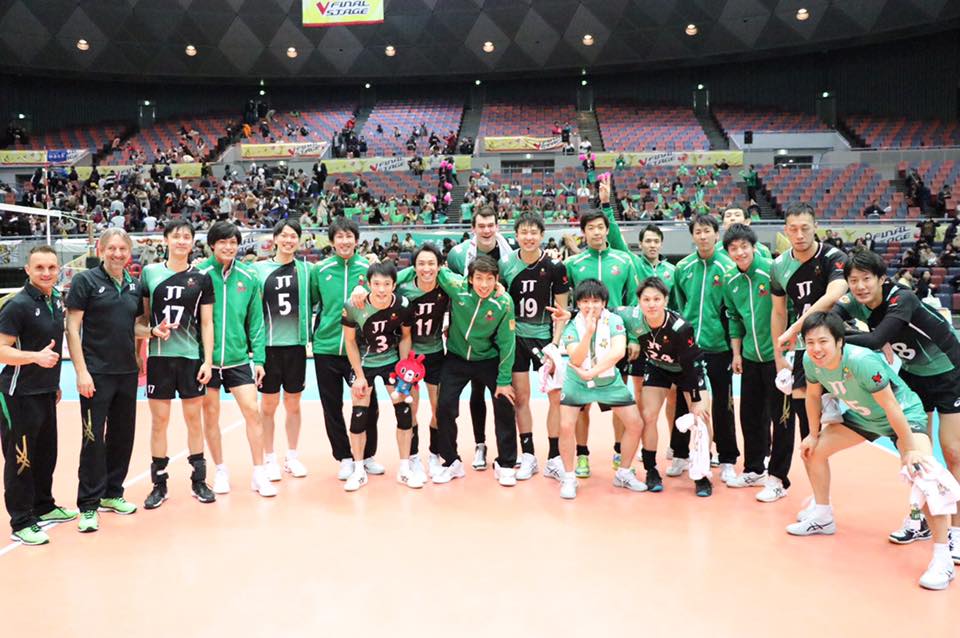 The final day of the Final 6 Playoffs in the Japanese Men’s V.League had two matches and both had playoff... Current Photo via JT Thunders

The final day of the Final 6 Playoffs in the Japanese Men’s V.League had two matches and both had playoff implications. The first match of the day had the third place Toray Arrows face the sixth place Suntory Sunbirds. A win in less than five sets by Toray would clinch the last berth in the Final 3 (Semifinal) for the Arrows. Any other result would give the JT Thunders a chance to overtake Toray. In the regular season, Suntory had defeated the Arrows twice, so the Arrows could not take the Sunbirds lightly in the match. Toray won the first set 26-24 after a block on a Suntory’s Yadrian Escobar spike. The second set went easily to the Sunbirds and Toray knew that they were in for a long day at 1-1. Toray came back in the third set to dominate 25-14, to take a least a point out of the match and force the Thunders to at least win. In the fourth set, Suntory got out to a seven point lead at 11-4 and Toray knew that it was going five at that time. With the chance for three points gone, the Thunders would be alive in the last match, but with the fifth set still to play, the question became, would the Thunders just have to win or would in need to be in less than five sets? In the fifth set, neither team was able to get a two point until 14-12 after went on 3-0 run with a block on Toray’s Gavin Schmitt spike. On their first match point Suntory served into the net, and Toray was still behind 14-13. On the ensuing serve, an overpass by Suntory led to a Takahiro Tozaki spike to tie the set at 14 and force extra points. Suntory had the first chance to win in extra points, but could not. At Toray 16-15, Escobar killed for the Sunbirds, to tie at 16. On the following serve, Suntory served deep for Toray to take a 17-16 lead. Toray’s Tozaki went back to serve and the ball was called out. However, Toray’s coach challenged the call. With the video screen shot, Tozaki’s serve landed right on the back line for an ace to win the set 18-16 and the match 3-2. The Arrows finish the Final 6 at 12 points and need JTEKT to take two sets against the Thunders in the last match. Toray’s Gavin Schmitt in the post match interview as man of the match and he was asked about the final match and replied, “Go JTEKT.” Schmitt led all scorers with 33 points (28k, 3b, 2a) in the match. No other Arrows player reached double figures, but Takaaki Tomimatsu had four blocks in the win. Yadrian Escobar for Suntory led the team with 26 points (21k, 5b, 1a) and Masashi Kuriyama had 19 (16k, 1b, 2a).

Entering the final match of the day, the JTEKT Stings had nothing to play for as their fifth place position was secure with Suntory’s loss. While the JT Thunders knew nothing less than a win in three or four sets would do. In the first set, JTEKT broke out from a tight set to take a 13-9 lead. The Thunders made a 5-1 run to tie the set at 14. The set remained tight and entered extra points after a JTEKT kill at Thunders 24-23. The Stings had four chances at set point, but could not complete the job. A Yuji Nishida error tied the set at 28. On the following serve Matey Kaziyski also hit his spike out for a Thunders 29-28. JT’s Shohei Yamamoto hit a spike off the block to give the Thunders a 30-28 set win and a 1-0 set lead. This first set only showed the craziness of the rest of the match.

The second set started with the Thunders taking a 9-6 lead, which slowly the Stings worked back to be tied at 14. The Stings took a 22-20 lead with an ace by Kaziyski. The Thunders tied the set at 23 after a block by Akihiro Fukatsu. The Stings’ Nishida killed for set point at 24-23, but then Nishida served out to tie the score at 24 and onto extra points for the second time. The Stings had two more set point chances, but could not convert. Thomas Edgar gave the Thunders a 27-26 with a kills and Yamamoto’s undigable spike gave the set to JT 28-26 and a 2-0 set lead. The Thunders just needed one more set win to make the Final 3.

The third set was all JTEKT Stings as the jumped out to an early 4 point lead and just kept slowly expanding it to take the set 25-18. Thunders had to win the fourth set to make the Final 3. If the Stings won it, then Toray would advance.

The fourth set the Stings took a 16-13 after two straight aces by Kaziyski. The Thunders went on a 5-2 run to tie at 18. Kaziyski killed the ball to give the Stings a 24-23 set point. Edgar spike the ball and it was called out. The Thunders challenged the call and said that the ball had touched the block. The video challenge was confirmed and the set was tied at 24-24. The match was going to extra points for a third time.  At JTEKT 27-26, Kaziyski had a chance to win the set, but was blocked by Edgar 27-27. At 30 all, Kaziyski served an ace to give them their third set point in extra points. However, Kaziyski then served long to tie at 31. Edgar and Kaziyski matched each other with kills for their teams 34th points. At 34, the Stings served out to give the Thunders a 35-34 lead and serve. Kaziyski spiked out across the court to give the set win 36-34 to the JT Thunders, the match 3-1 to the Thunders and the final spot in the Final 3 to the Thunders. Just a ridiculous match with so much tension. The Thunders had seven chances at match point in extras, while the Stings had four chances at set point. Thomas Edgar finished with 48 points on 43 kills, 2 blocks and 3 aces for the Thunders to lead all scorers. Matey Kaziyski tried his best for the Stings with 38 points, 26 kills, 6 blocks (to lead the match) and 6 aces (also leading the match.)  Yuji Nishida for JTEKT had 22 (20k, 1b, 1a) and JT’s Shohei Yamamoto also had 22 (20k, 1b, 1a as well) in the match. The Thunders celebrated after the match with a little curling from the Olympics as they knew the Japanese women’s curling team had won bronze. 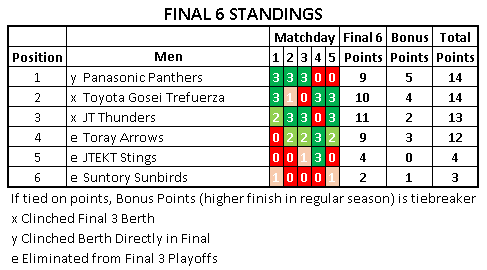