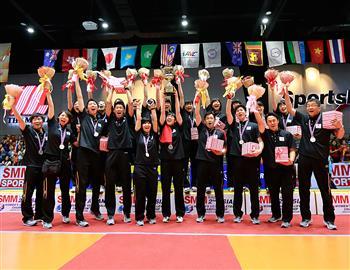 Japan and Thailand earn the final spots to the U23 Women's World Championships in Slovenia. Current Photo via FIVB

This is the second time in a row that Thailand has secured their spot in the finals of the Asian U23 Championships. The Thai squad took down Vietnam in straight sets 3-0, (25-21, 25-15, 25-20). In the last edition of the Asian competition, Thailand was downed by China, becoming the runner-ups of the tournament. For Thailand Chatchu-on Moksri was the top-scorer on the team with 15 points, 11 of which were kills while Pimpichaya Kokram added another 12 points to the Thai tally.

In the bronze medal match, Vietnam- in their first ever Asian U23 Championships- was able to take down Chinese Taipei in a three-set sweep 3-0, (25-20, 25-19, 25-19). This is the first time that Vietnam has claimed a top-three finish at any Asian competition.