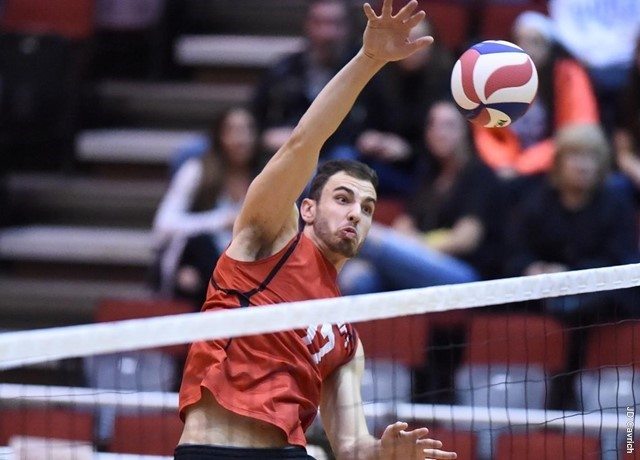 Saint Francis improves to 8-9 overall and 4-4 in conference play, while George Mason dropped to 5-9 and 2-5 in the EIVA.

Kills from Kegerreis and Hogan gave SFU an early 3-2 lead against GMU in the decisive fifth set. The Patriots then battled back to cut the Flash lead to 6-5. Braswell’s sixth service ace of the match gave SFU a 9-6 lead. A Braswell kill completed the comeback as the Flash took the set and match 15-12.

Saint Francis jumped out of the gate early in the first set, taking a 3-0 lead after a kill from Hogan and two Mason attack errors. The Patriots answered with a 3-0 run to tie the set at 6-6. Three Braswell kills highlighted a 5-1 SFU run to take a 13-9 lead. The Patriots would trim the Red Flash lead to one at 16-15, and forced SFU to burn its first timeout of the set. The rest of the set featured seven ties and seven lead changes, but GMU scored the last three points for a 25-22 win.

After George Mason took a 4-1 lead in the second set, Saint Francis scored four unanswered points to pull ahead 5-4. SFU turned a 10-11 deficit into a 13-11 lead after kills from Hogan and Fisher and a Braswell service ace. The Red Flash lead would not last, as the Patriots converted on SFU miscues to take a 17-15 advantage. A Kegerries kill kept the Red Flash within striking distance, down one at 21-20. The Patriots ended the set 25-21 on a Jack Wilson service ace.

Saint Francis and George Mason started the first set evenly matched before the Patriots went on a 5-1 run to go up early 7-5. Led by back-to-back service aces from Braswell, the Flash took a 10-9 lead and caused the Patriots to take a timeout. Mason clawed their way back in the set to take a two-point lead at 18-16. Three Fisher kills led a 6-1 rally to give the Flash a 22-19 lead. A Mason set error gave the Flash the win, 25-22.

The Red Flash carried the momentum over into the fourth set, taking a 9-4 lead. With Saint Francis ahead as many as seven at 13-6, George Mason rallied off three straight points to comeback within four at 13-9. SFU would maintain its largest lead of the set at 19-10, and cruised to a 25-14 victory to force a fifth set.

Saint Francis will travel to No.1-ranked Ohio State next Friday at 7 p.m.

George Mason University’s men’s volleyball team was within three points of a sweep over Saint Francis on Saturday night, but waned away as the match progressed and eventually fell 3-2 to the Red Flash in the RAC Gym.

The match closed out the first half of Mason’s (5-9) EIVA schedule and the defeat in it dropped the Patriots to 2-5 in conference play. Meanwhile, Saint Francis (8-9) won fourth of its last five EIVA matches and moved to a playoff spot with a 4-4 record.

-Mason and Saint Francis were relatively even in the offensive criteria with .242 and .255 hitting percentage, respectively, and six aces apiece. Saint Francis won the battle on the defensive end, however, outdigging the Patriots 41-18.

-Hogan completed his double-double with match-high 10 digs while senior libero Johnny Gomez had team-high seven digs for Mason, four more than the closest Patriot in that category.

-For the second night in a row, the Patriots doubled their opponent in service errors, 22-11. Mason had six in the decisive fifth set, which canceled out Mason’s better nine kills and .615 hitting performance in it.

-Mason’s energy level drastically dropped over the course of the two-hour match. The fourth and fifth sets were played out entirely under Saint Francis’ control with Mason only managing to come on level terms as a result of four of the 66 points of those sets.

After going 1-5 in February, Mason will aim to start fresh in March as the Patriots continue their homestand next week with non-conference matches against McKendree and Coker.