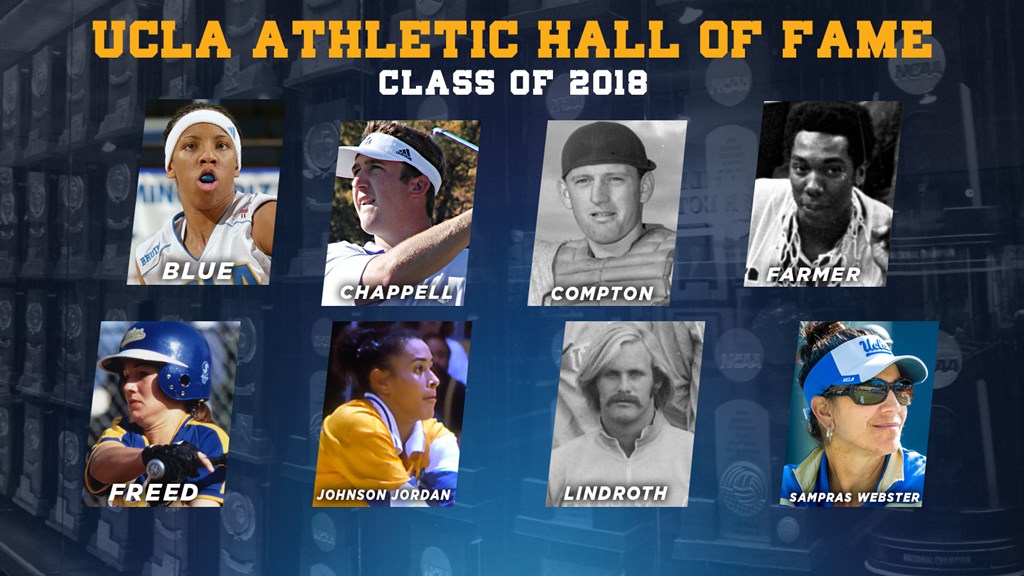 Eight distinguished Bruins have been selected as members of the UCLA Athletic Hall of Fame Class of 2018. Official induction ceremonies will take place October 5, and the group will be honored at halftime of the UCLA-Washington football game on October 6.

The Hall of Fame class includes seven Bruins who have totaled 12 NCAA Championships between them as either a player or coach (Chappell, Farmer, Freed, Johnson Jordan, Lindroth and Sampras Webster); three Olympians (Freed, Johnson Jordan and Lindroth); and a World War II hero (Compton).

Following are biographies on the 2018 UCLA Athletics Hall of Fame members:

Nikki Blue (Women’s Basketball, 2002-06)
One of the all-time great point guards in Pac-10 history, Nikki Blue was just the fifth player in conference history to be named to the All-Pac-10 team four straight years. She finished her career ranked fifth on the all-time UCLA list in scoring (1,797), second in assists (602), third in steals (325), fourth in made three-point shots (114), seventh in three-point shooting percentage (.355) and second in made free throws (455). Blue, a two-time honorable mention All-American and four-time Pac-10 All-Tournament selection, produced 89 double-figure scoring games in her career and also became the first Bruin ever to lead the Pac-10 in assists with 189 as a senior. In 2006, she helped lead UCLA to its first-ever Pac-10 Conference Tournament title. Blue was a second-round pick in the 2006 WNBA Draft and played in the league for four years before moving into coaching. She is currently an assistant coach at Grand Canyon University.

Kevin Chappell (Men’s Golf, 2005-08)
Kevin Chappell capped an outstanding collegiate career by winning NCAA team and individual titles in 2008 and capturing both the Fred Haskins Award and the Jack Nicklaus Award for National Collegiate Player of the Year. Chappell was a three-time PING All-American, a four-time All-Pac-10 honoree and the 2008 Pac-10 Golfer of the Year. Over his career, he won five tournaments, which tied for fourth-most in school history. He also tied the school record with the best 54-hole tournament score, a 198. Since becoming a professional in 2008, he has accumulated over $15 million in earnings, including a win at the 2017 Valero Texas Open and a third-place finish at the 2011 U.S. Open.

Lynn “Buck” Compton (Baseball, 1940-42, 1946; Football, 1940-42)
A decorated war hero and later a California State judge, the late Lynn “Buck” Compton was a two-sport star at UCLA, earning all-conference honors as a catcher on the baseball team and playing as a two-way guard on both offense and defense for the football team. Compton’s career batting average at UCLA was around .340, and he was a charter member of the UCLA Baseball Hall of Fame in 1988. In 1942, he led the UCLA football team to its first-ever win over USC and its first-ever conference championship. The 1942 Bruins were also the first UCLA team ever to go to the Rose Bowl. Compton joined the Army in 1942 during World War II and earned several military distinctions, including a Silver Star, Bronze Star and a Purple Heart. Upon his return from the war, he returned to UCLA and played one final season for the baseball team in 1946. He turned down an offer to play minor league baseball to concentrate on a career in law, and he worked his way up the ladder from policeman, to detective, to the chief deputy district attorney for the city of Los Angeles. In 1970, he was appointed to the California Courts of Appeal, where he served as a judge for 20 years.

Larry Farmer (Men’s Basketball, Player: 1971-73, Assistant Coach: 1974, 1976-81; Head Coach: 1982-84)
A 14-year Bruin, Larry Farmer won three consecutive NCAA Championships as a player from 1971-73 and served as an assistant coach in 1974 and from 1976-81 before becoming the head coach of the Bruins from 1982-84. Farmer was MVP of the UCLA freshman squad in 1969-70, leading the team in scoring (21.5 ppg) and rebounding (14.7 rpg). He played in 82 games and made 60 consecutive starts, averaging 9.4 points and 4.8 rebounds per game. He finished his career as the No. 28 scorer in school history and compiled an overall varsity record of 89-1, the best three-year team mark in NCAA history. Farmer was selected in the NBA and ABA drafts but chose to coach at UCLA. In his six years as a varsity assistant coach, UCLA went 144-34, winning four league titles and playing in six NCAA Tournaments, including a trip to the 1976 Final Four and 1980 Championship game. Farmer became head coach of the Bruins in 1981 and led UCLA to the 1983 Pac-10 title and a three-year record of 61-23. Farmer went on to coach professionally and is currently an assistant coach at Western Michigan.

Amanda Freed (Softball, 1999-2002)
Amanda Freed began her UCLA career with a no-hitter and finished it as the all-time winningest pitcher in UCLA history with 97 victories. A three-time All-American and four-time All-Pac-10 honoree, Freed played in the Women’s College World Series four times, winning as a freshman in 1999, when she contributed two hits and struck out two in three innings of relief to pick up the save in the title game. Freed sits in the UCLA Top 10 in eight statistical categories, including wins (fourth with 97), strikeouts (sixth with 760), shutouts (sixth with 47) and no-hitters (ninth with five). As a hitter, she also ranks in the Top 10 in eight categories, including at-bats (second with 816), stolen bases (tied for third with 51) and runs scored (third with 182). Freed was an alternate for Team USA at the 2000 Olympics and helped the 2004 team win gold.

Jenny Johnson Jordan (Women’s Volleyball, 1991-95; Beach Volleyball Asst. Coach, 2014-present)
Jenny Johnson Jordan was a member of UCLA’s 1991 NCAA Women’s Volleyball championship team as a player in 1991 and an assistant coach for UCLA’s 2018 NCAA Beach Volleyball championship team. She finished her playing career at UCLA as one of just 12 Bruins to post at least 1,000 kills and digs, ranking No. 22 all-time at UCLA with 1,212 kills and No. 9 with 1,214 digs. Selected in 1997 as one of the 25 greatest volleyball players in UCLA history, Johnson Jordan earned two All-America honors in 1994 and 1995 and was a two-time first-team All-Pac-10 honoree in 1993 and 1995. She played on UCLA’s championship team as a freshman and on two runner-up teams in 1992 and 1994. Following her playing days at UCLA, she formed one of the most successful beach volleyball tandems in the world with former Bruin teammate Annett (Buckner) Davis, finishing fifth in the 2000 Olympic Games and serving as alternates for the 2004 Olympics. Johnson Jordan won 10 professional beach titles worldwide and was honored in 2002 with the AVP Special Achievement Award. In her fifth year as assistant coach for the UCLA Beach Volleyball team, she helped lead the Bruins to their first-ever Pac-12 and NCAA title in 2018. Johnson Jordan and her father Rafer Johnson will become the first father-daughter duo ever to be inducted into the UCLA Athletic Hall of Fame.

Eric Lindroth, Men’s Water Polo (1969-72)
Two-time All-American Eric Lindroth led UCLA to a 73-4 overall record and three NCAA Championships in four years. He was a freshman on UCLA’s first-ever NCAA championship team in 1969 and led the Bruins to two more titles in 1971 and 1972. Lindroth scored three goals in the 1971 championship game and was selected the Tournament MVP in 1972. A member of the U.S. National team from 1970-83, Lindroth helped Team USA win a bronze medal at the 1972 Olympics, and he was also a member of the 1980 U.S. Olympic team and a member of World Championship teams in 1973, 1975 and 1978. He helped the U.S. win Pan American Games gold in 1979 and silver in 1975. He was also a member of the 1983 FINA Cup championship team. Lindroth was inducted into the USA Water Polo Hall of Fame in 1988 after playing in over 100 international matches.

Stella Sampras Webster (Women’s Tennis, 1988-91; Women’s Tennis Coach, 1997-present)
Just the fourth active head coach to be inducted into UCLA’s Athletic Hall of Fame, Stella Sampras Webster is the winningest coach in UCLA women’s tennis history with a 420-158 overall record in 22 years. She led the Bruins to their first two NCAA team titles in 2008 and 2014 and to the NCAA Tournament all 22 years, including 19 Top 10 finishes. Sampras Webster was selected the 2012 ITA National Coach of the Year and the 2008 Pac-10 Coach of the Year and was inducted into the Southern California Tennis Association Hall of Fame in 2017. A four-year All-American from 1988-91, Sampras Webster won the NCAA doubles championship with Allyson Cooper in 1988 and was NCAA runner-up with Kimberly Po in 1991. She also helped lead UCLA to four-straight NCAA Top 3 finishes. Sampras Webster captured two Pac-10 doubles titles in 1989 with Mamie Ceniza and in 1991 with Po.