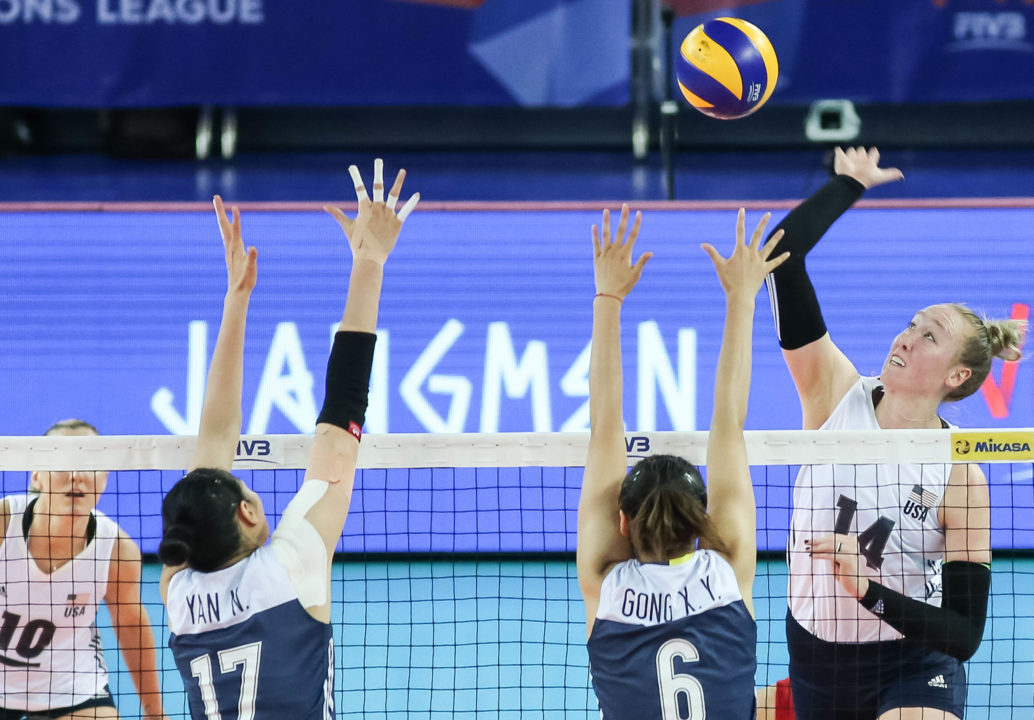 Michelle Bartsch-Hackley racked up a match-high 18 points to guide the United States to a sweep of host China, its 10th straight win in Volleyball Nations League play. Current Photo via FIVB

Michelle Bartsch-Hackley racked up a match-high 18 points to guide the United States to a sweep of host China, its 10th straight win in Volleyball Nations League play. It marked the seventh time Bartsch-Hackley has led Team USA in scoring in 12 matches.

Bartsch-Hackley put down 16 kills and added two aces, while Tori Dixon (11), Jordan Larson (11) and Kelly Murphy (9) rounded out the group of top scorers. Larson notched 10 kills and a block, while Dixon added nine putaways and two blocks. Murphy chipped in eight kills and an ace. Foluke Akinradewo led the team at the net with four blocks.

The United States grabbed a 6-4 lead in Set 1 with help from a kill and an ace by Bartsch-Hackley and boosted the lead to five at 12-7 before cruising to a 25-20 victory.

Set 3 saw the USA down 20-15 late, before rallying to seal the sweep. The Americans led 8-6 at the first technical timeout, but China put together a 7-1 run to turn the tables and vault ahead by four at 13-9. The United States chipped away to tied it up at 14. From there, the Chinese built a 20-15 advantage. Team USA dug deep and closed out the set on a 10-0 run. An all-around effort contributed to the final rally as Bartsch-Hackley, Larson and Annie Drews all chipped in points. A Bartsch-Hackley ace gave the team a match-point try at 24-20 and an overturned Chinese point on review gave the Americans the win.