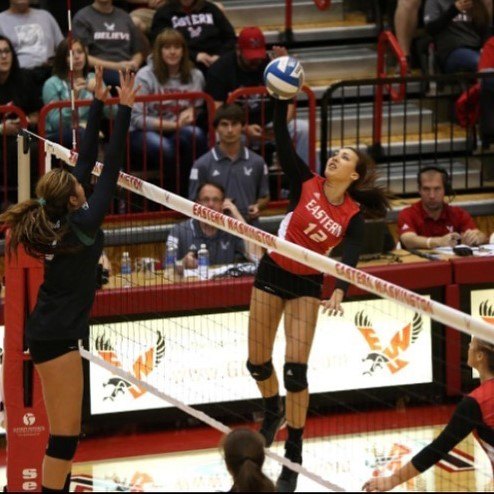 After improving win totals over the past two seasons, Fresno State is adding to its roster through the transfer market. Jessica Gilbert comes by way of Eastern Washington while Emily Dzubak and Karina Felipe join the roster from the Junior College ranks.

The only transfer that Fresno State added with prior Division I experience is Jessica Gilbert, previously at Eastern Washington. Gilbert, a 5’11” right side, will have two years ahead of her after she had 233 kills as a sophomore in 2016. In total, Gilbert appeared in 26 matches and was second on the team in points (269), kills and blocks (53).

“We’re bringing a local back to the Valley,” Netherby-Sewell exclaimed of the news. “Jessica is excited to be a Bulldog and seems to fit right in. We like her eagerness to learn and become an elite player. She’s unique too as she is an explosive slide attacker on the right that has range. She’ll pose a big challenge to our current talent on the right because she’s different and adds something to our team that we don’t have.”

Dzubak previously attended American River College in nearby Sacramento for two seasons, as she will now have two years left of eligibility with Fresno State. As a libero/defensive specialist, she led the Big 8 Conference in digs and digs per set both seasons. That included 6.44 digs per set in 2016 with a season-high 46 digs coming in a match in early November.

“Emily is a dedicated athlete,” Fresno State head coach Lauren Netherby-Sewell said in the Fresno State release. “Coaches who have worked with her or competed against her say she is super fun to watch and we agree. She’s really strong defensively and comfortable with her entire game. She’s speedy and athletic and I think she’ll bring a mature vibe to the locker room.”

The other commit coming from Junior College is a 6’0″ outside hitter from Brazil – Karina Felipe. Felipe played her first year at Western Nebraska Community College before spending her last two seasons at Ranger College in Texas. However, she only played the first year at Ranger College and spent her final season as a student assistant coach, giving her two years left of play at Fresno State. Her final season of actual play, in 2015, she recorded 234 kills and 184 digs.

“She is a leader and a firecracker. She’s mature and plays with a lot of emotion and fire,” Netherby-Sewell said in regards to Felipe. “The game comes easy to Karina and she understands it. She’s a true 6-rotation outside hitter and will be a high-impact player right away for us. She’s strong and handles the ball really well and has range being able to work blocks and find seams. I think she’ll be a big-time playmaker and there is no doubt our crowd will love watching her compete.”

Fresno State won just eight matches in 2014. They’ve added to that number the last two seasons and finished a game over .500 a year ago. The three transfers are among the five newcomers for Fresno State who will look to blend some experienced returnees with fresh faces to continue the upward trajectory of the program.