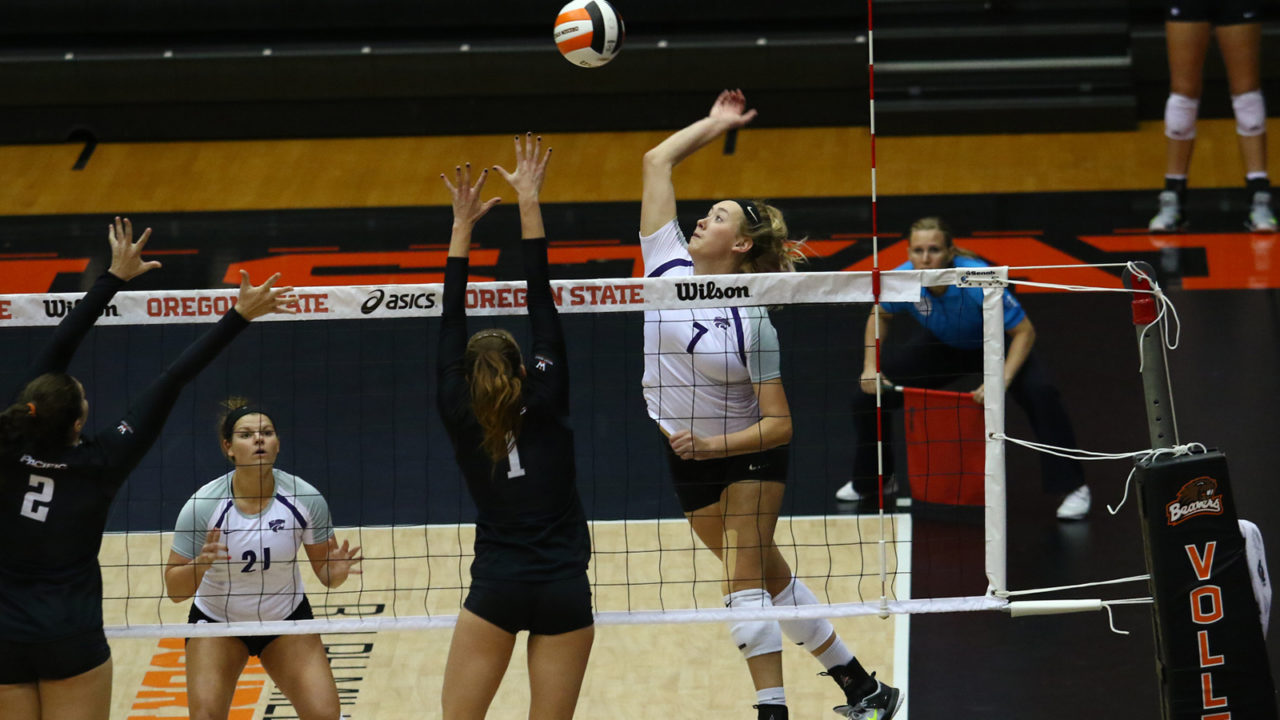 ATLANTA – Kansas State snapped a four-match losing streak with a four-set win over North Florida to kick off its stay at the Georgia Tech Invitational on Thursday.

In Set 1, North Florida built a two-point edge early (5-3) and maintained the lead until the Wildcats scored three straight to turn an 8-6 deficit into a 9-8 lead of their own. A kill and a block by Williams put K-State on top, then kills by Zumach and Flowers gave the team an 11-9 lead. UNF tied it up at 14, but soon trailed by five after two Vogel kills and an ace by Smith gave Kansas State a 19-14 advantage. The Ospreys were within three at 19-16, but K-State closed out the set on a 6-2 run. A Flowers kill clinched the 25-18 win as the Wildcats hit .367 in the stanza.

K-State scored five of the first six points in Set 2 and boosted the lead to seven at 12-5 as four different players turned in kills. The Ospreys scored two in a row to slow the Wildcats, but Kansas State responded with six straight points to vault ahead 18-7 on a kill by freshman outside Brynn Carlson. Back-to-back putaways by Zumach and another by Carlson made it 22-10, but UNF fought back with nine of the next 11 points, including three to hold off Wildcat set-point tries, before falling 25-19 on an Alyssa Schultejans kill.

UNF took the early lead after the break, going up 6-3 on an ace by Taryn Griffey. The Ospreys boosted the advantage to 11-5 as three players posted kills and Madilyn McCarty managed an ace. K-State rallied to within one at 13-12 with a 4-0 run capped by three straight Killeen aces. North Florida pushed the margin back to three at 15-12 and held the Wildcats at bay until a tie at 18-all on a block by Vogel and Elle Sandbothe and 21-all after back-to-back Zumach putaways. The Ospreys held on for the win with four straight points, the last on a KSU miscue.

Kansas State went ahead 13-7 in Set 4 with help from four UNF errors and kills by Zumach and Williams. The Ospreys narrowed the gap to two at 13-11, including a kill and a block by Griffey, but could not break through. It was a two-point game again at 16-14, but that sparked a 6-3 KSU rally, which made it 22-17. A block by Flowers and Schultejans put the Wildcats on the hill for the match at 24-19, but it was far from over. A trio of K-State miscues and a kill by Wheeler kept the match going, making it 24-23, but a Vogel kill stopped the comeback short for the 25-23 win.

K-State’s (3-4) Kylee Zumach (16 kills), Bryna Vogel (11) and Macy Flowers (10) spearheaded a Wildcat offense that hit above .360 in each of the match’s first two sets. Vogel, a senior opposite, added 11 digs for her second double-double of the season while Flowers chipped in with five blocks, helping a K-State defense that held North Florida (4-4) to a .143 efficiency on the night.

“I was very pleased,” said head coach Suzie Fritz after the match. “I thought we played really well on both sides of the ball. We were looking for some kind of a differential between what we hit and what they hit. We were really pleased. We hit for a high efficiency and, maybe more importantly, we held them to 15 percent. I thought it was a good volleyball team. I thought we played very physically. We were significantly better on defense, better at the net.”

The Wildcats ended the match with season highs in total kills (60) – including a season-best 19 in the second set – and service aces (8) to end a four-match losing streak that dated back to the opening weekend of the season.

Junior libero Reilly Killeen led the K-State back row with 16 digs to help the Cats to a 57-39 dig advantage. Junior outside hitter Alyssa Schultejans contributed three blocks with middle blocker Peyton Williams and Vogel each had a pair of stuffs. UNF did not eclipse a.200 team hitting percentage in any of the match’s four sets.

“Our middles were all really good,” Fritz added. “(Elle) Sandbothe came in and played well. Flowers and Williams got the start and they both played really well. A number of positive things that tell us we are getting better.”

Sandbothe finished with three kills on four attempts with a block in three sets of action.

With the scored tied at 14 in the opening set, K-State rattled off five straight points and forced UNF to use both of its timeouts in that span. The five-point gap was enough for the Cats to close out the set, 25-18. Vogel had five kills on six swings without an error in the frame as K-State hit .367 (14k-3e-30ta) as a team. Flowers had three kills on as many attempts in set one.

K-State never trailed in the second set and hit .368 on its way to a season-high 19 kills. The Cats held North Florida to a .103 hitting efficiency behind 17 digs and a pair of blocks. Schultejans and Zumach each had five kills in the second stanza.

In a set it largely trailed, K-State managed to tie the score at 21 late in the third following back-to-back kills from Zumach. After using its final timeout, UNF scored the next four points to claim the set. The Ospreys limited the Cats to a match-low 11 kills and .121 hitting percentage.

Zumach added five more kills in the final set in which K-State led throughout. The redshirt junior led the Cats in kills for the sixth time in seven matches this season.

K-State will play two matches on Friday to wrap up the Georgia Tech Invitational. The Cats will face off with Xavier at 10 a.m. CT before meeting host Georgia Tech at 7 p.m. Fans can listen to the Wildcats’ match with the Musketeers on KMAN 1350 AM with Friday’s match vs. the Yellow Jackets airing on ACC Network Plus.

North Florida volleyball came out on the wrong end of a four-set match against Kansas State on Thursday night to open the Georgia Tech Invite.

Early in the match, the teams went back and forth with three ties including being knotted up at nine apiece following Alana Shoff’s second kill of the match. The set remained close throughout as the Wildcats held the lead, but only by as many as three points on either side. Kansas State closed on a 4-1 run to take the opening set 25-18.

In the second set, the Wildcats flexed their muscles dominating the Ospreys throughout the set in route to a 25-19 set win. Kansas State had a .368 hitting percentage while holding UNF to just a .103 hitting.

The Blue and Gray bounced back in set three as they led by a slim 6-5 margin before going on a 5-0 run to stretch their lead over Kansas State. The Wildcats didn’t bow out as they fought back and tied the match at 21. The Ospreys closed out the set with four straight points to win, 25-21.

Redshirt senior Carina Hoff had her second straight double-double of the season.
Setter Madilyn McCarty posted her sixth match of with at least 20 assists.
This marked the first meeting in program history between UNF and Kansas State.

Coach Loeswick’s Thoughts
“I think we did a really nice job of serving tonight and gave ourselves some good opportunities. The grit was there, and the play is getting better, but still left a few easier points out there. We have some great challenges ahead of us tomorrow, but a good opportunity to continue to get better.”

UP NEXT
The Ospreys conclude the Georgia Tech Invite on Friday with a pair of matches beginning at 1 p.m. against host Georgia Tech before battling Xavier at 6 p.m. to wrap up the weekend.