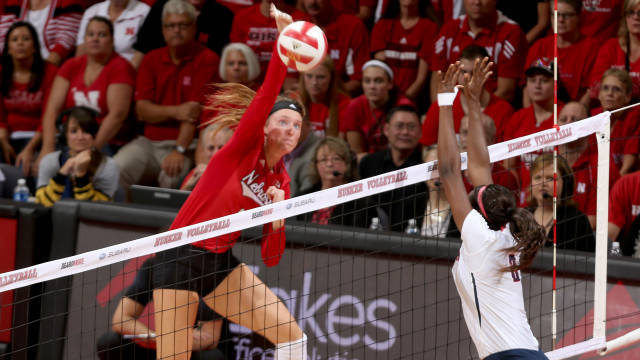 After spending a season in Dresden, Germany with Dresdner SC, Kadie Rolfzen has decided to take her volleyball talents to Japan to play with Toray Arrows. Current Photo via Nebraska Athletics

After spending a season in Dresden, Germany with Dresdner SC, Kadie Rolfzen has decided to take her volleyball talents to Japan to play with Toray Arrows.

Both Kadie and her twin sister Amber Rolfzen took the court at Dresdner SC in their first professional season abroad, following their departure from the University of Nebraska. Amber will head to Beziers Angels for the 2017-18 season while Kadie will head across the globe in their first split playing from each other.

While with Nebraska, Rolfzen was named an AVCA All-American First Team honoree in both 2015 and 2016 while being selected as a Third-Teamer in 2013 and 2014. To end her career, Rolfzen put down 1,564 kills and 1,255 digs ranking sixth and seventh, respectively, on Nebraska’s all-time chart.

With Dresdner SC, Rolfzen helped the team to the semifinals of the league, where they were downed by Stuttgart – who lost to the eventual champions, SC Shweriner. This put Dresdner in third place overall in the league with a 16-6 record.

Last season, Toray Arrows finished sixth in the league with a 10-11 record, not making to the finals. However, they did finish third in the winner’s stage of the playoffs. The team will begin their 2017-18 season with Body Queenseis on October 22.