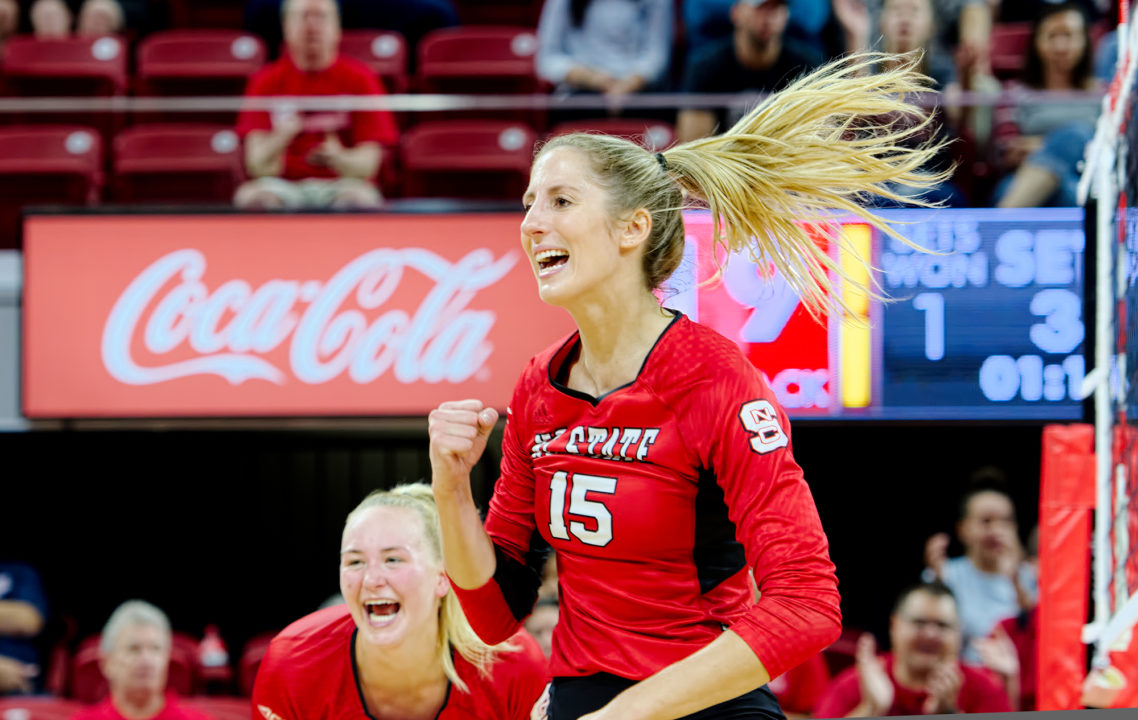 Kaitlyn Kearney put down 13 kills on an astounding .765 hitting efficiency as the host NC State Wolfpack swept the visiting Boston College Eagles. Set scores were 25-20, 25-13, and 25-19. Julia Brown tied for match high honors with 13 kills while Bree Bailey chipped in 11. Becky Porter dished out 29 assists and Emily Harris led the defense with 13 digs. With the win, NC State improves to 17-8 (12-2 ACC) and will return to action on Thursday, November 9th to host Clemson.

Lynn Braakhuis led a balanced offense with 8 kills while Cat Balido and Sophie West (.600) chipped in 7 and 6 kills respectively. Jane Dejarld handed out 21 assists while Jill Strockis paced the defense with 12 digs. Boston College drops to 6-18 (3-11 ACC) and will return to action on Thursday, November 9th when they travel to face Miami.

RALEIGH, N.C. – The NC State volleyball team recorded its highest attacking percentage in an Atlantic Coast Conference (ACC) match this season with a .375 mark to take down the Boston College Eagles in straight sets, 3-0 (25-20, 25-13, 25-19), Sunday afternoon inside Reynolds Coliseum.

The Wolfpack’s .375 hitting percentage is the second best on the year and eclipses the program’s previous season high of .362 for the highest in a conference match this season.

NC State opened the match strong and continued its stellar play, as the match featured just one tie and one lead change – both of which were in the first set. NC State never trailed in sets two and three nor was the score tied.

Worth Noting
– NC State remains unbeaten in home ACC matches this season with an unblemished 8-0 record.
– Each player dressed out for NC State saw action in the match, as 13 different players participated.
– NC State recorded an attacking percentage better than .300 for the eighth time this season and the Wolfpack is undefeated on the year when accomplishing the feat.
– The Pack improved its record to 8-1 in matches on Sundays this year, highlighted by a perfect 7-0 mark in ACC matches.
– For the second consecutive match, Kaitlyn Kearney did not commit an attacking error as she recorded a .765 attacking percentage with 13 kills in the contest. In her last two matches, the senior has swatted 21 kills on 30 attempts with zero errors.

Quoting Hampton-Keith
Overall thoughts…
“”It was a good weekend for us and nice to be home,” said second-year head coach Linda Hampton-Keith. “We’re 8-0 in ACC home matches, so that’s impressive. We have two more next week so our focus and attention will turn to next weekend.

“We’re pleased with this weekend, we’re happy with the outcome but now we’ve got to look forward to next weekend and Saturday being senior night, which is always emotional so making sure we stay on task and accomplish the goal at hand which is Clemson on Thursday then Georgia Tech on Saturday.”

Match Rewind
– After Boston College scored the first point of the match, NC State reeled off five unanswered points capped by back-to-back kills from Lauryn Terry and never trailed again in the match.
– The Eagles trimmed the Wolfpack lead to one at 19-18, but kills from Kearney and Bree Bailey forced a BC timeout at 21-18.
– Two more points followed for the Pack out of the timeout and a service error ended the first set to give NC State the 25-20 win and 1-0 lead in the match.
– In the second set, the Wolfpack tallied a .531 team attacking percentage with 20 kills thanks to a 91 percent sideout rate.
– Three unanswered points helped NCSU grab a 10-5 advantage following a kill from Bailey.
– NC State pulled away in the frame with a 7-1 run to open up an 18-8 lead and went on to win the set, 25-13.
– The Wolfpack won six of the first eight points in the third set to take a 6-2 lead.
– After consecutive points from Boston College, NCSU won eight of the succeeding 10 rallies to extend the margin to 14-6.
– A kill by Nailah Gordon stretched NC State’s lead to 23-12, tied for its largest in the set.
– Julia Brown and Sarah Konchan teamed up on a block to end the third set, 25-19, to give NC State the 3-0 victory.

Top Performers
– Brown and Kearney each swatted 13 kills in the contest to tie for the match high with stellar attacking percentages of .500 and .765, respectively.
– Bailey also turned in a strong performance with 11 kills and a .333 clip.
– At setter, Becky Porter led all players with a season-high 29 assists complemented by nine digs to finish one shy of a double-double.
– Libero Emily Harris contributed a match-high 13 digs, while Makenzie Kuchmaner tallied nine and Grace Irvin pitched in with seven.

Up Next
NC State returns to action Thursday evening when the squad hosts the Clemson Tigers. First serve is slated for 7 p.m. inside Reynolds Coliseum and the contest will be broadcast live on the ACC Network Extra.

Following a strong showing in the first frame, BC fell quickly in the second frame. Though the Wolfpack took a quick lead in the third set, the Eagles found a late 8-1 run, that kept them in the game and NC State at 23 points, until NC State found the last two points and secured the victory.

NC State was led by Julia Brown and Kaitlyn Kearney, both of whom produced 13 kills. Emily Harris notched 13 digs and Becky Porter had 29 assists.

– Strockis was one dig short of tying the match leader. Her 12 digs led the Eagles.

– Freshman Amaka Chukwujekwu led the match with four blocks, aiding the Eagles in being block leaders for the match.

– DeJarld registered BC’s only two service aces, one of which was used to delay the Wolfpack victory.

The Eagles picked up the first point due to an attack error from the Wolfpack, but NC State found a quick 7-2 run to take the lead. BC found a 5-1 run that included two kills from both Baldio and Braakhuis and a kill from Goss. The teams traded points from there out, but BC couldn’t find a way to match NC State. After being held to set point, thanks to a kill from Balido, NC State took the first set, 25-20.

NC State only allowed five BC points as they reached 10 points themselves. The Eagles only found points here and there, falling in the second frame, 25-13.

NC State jumped out ahead for a quick lead early in the set. A late 8-1 run from the Eagles – that included four kills from Balido, a kill from West, a DeJarld service ace and block from West and Balido – kept BC alive until NC State took the set, 25-19.

Up next: The Eagles will travel to Florida to challenge Miami and Florida State next weekend.