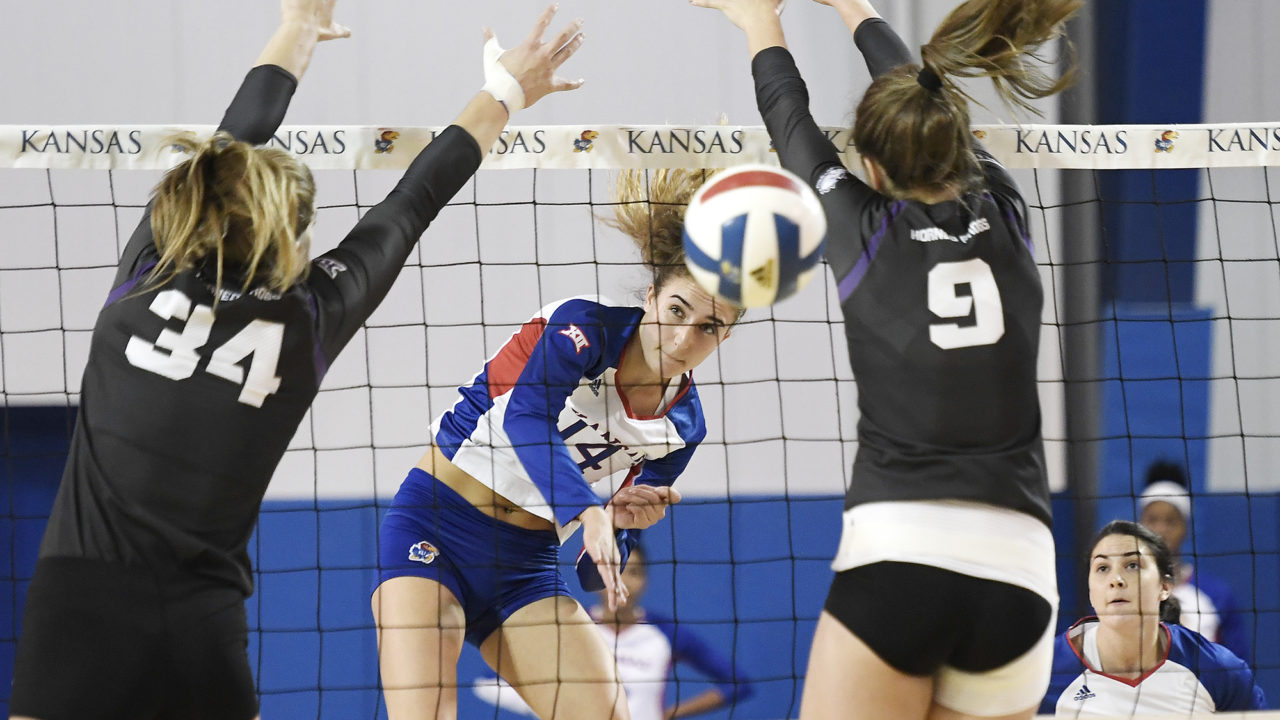 Senior outside hitter Madison Rigdon notched a match-high 17 kills to lead the Kansas attack, while also chipping in 11 digs, a team-leading three blocks and an ace. Senior right side hitter Kelsie Payne followed with 12 kills, while sophomore outside Jada Burse added nine putaways. Sophomore libero Allie Nelson pulled up a team-leading 21 digs, followed by Rigdon (11) and senior setter Ainise Havili (10). Havili rounded out a double-double with 50 assists and two aces.

Kansas took a 10-7 lead in the opening set after snapping a 3-all tie. Rigdon downed three kills and Haviili added a kill, a block and an ace in the early run. The Mountaineers knotted the score at 15 with help from two kills each by Levak and Caffrey and three KU service errors. The teams tied six more times, last at 21, before Kansas managed a two-point lead at 23-21 on a Zoe Hill putaway. WVU burned both of its timeouts one point apart as KU closed out the 3-0 run. Down 24-22, West Viriginia scored three straight with two Swanegan kills and an Caffrey ace, to earn a set-point try of its own at 25-24. A putaway by Evans gave WVU another shot, but the Jayhawks stole away the win with a trio of kills, one each by Hill, Rigdon and Payne.

KU boasted an early 6-2 lead in Set 2 only to see it erased by four straight Mountaineer points. After ties at 7 and 8, Kansas took advantage of a pair of WVU miscues for an 11-8 lead. The score was soon knotted again at 13, sparking a string of four ties, last at 18. From there ,Kansas built a three-point lead at 24-21 as Ridgon notched three kills and West Virginia helped with two errors. Burse capped the set at 25-22.

The teams split the first 26 points of Set 2, with Kansas boasting the largest lead at 6-3. West Virginia knotted the score at 13 on a KU service error, before going up 16-13 with help from a pair of blocks. The Jayhawks were within one at 16-15, but the Mountaineers closed out the set and extended the match with a 9-2 run. Four players turned in kills in the final stretch, which ended with a stuff by Swanegan and Erin Slinde.

The Jayhawks jumped ahead 8-4 in Set 4 as WVU committed four errors and sophomore middle Mmachi Nwoke notched two kills. Kansas upped the point margin to eight at 15-7 with a 4-0 run, including kills by Rigdon and Payne and an ace by Havili. The Mountaineers would get no closer than seven the rest of the way. Two kills each by Rigdon, Nwoke and Hill led Kansas to the 25-17 win and the match.

“I thought we did some nice things out there, but we weren’t consistent enough,” said third-year coach Reed Sunahara. “When you play a team like Kansas, you have to be consistent all the time. We talk to our team about being good all the time, and that’s what we have to do. Every time we have a match or practice, it is a learning experience, and we need to learn from today.”

Sophomore setter Erin Slinde assisted on 46 kills, as Alexa Hasting dished out five assists. Hasting also led the team with 22 digs, followed by Caffrey with 15. Of note, Gianna Gotterba returned to the court tonight after suffering a knee injury earlier this year.

A .348 attacking percentage in the first frame helped the Jayhawks take the set, 28-26. WVU did not back down though, as the Mountaineers tied set one at 15-all with back-to-back kills from Swanegan and Caffrey, respectively. The set was tied once again at 20 apiece, but a kill from Levak put the Mountaineers ahead, 21-20. Kansas then collected three straight points to go up 23-21, forcing West Virginia into a timeout late in the frame. The Mountaineers came out strong from the stoppage, accumulating three of the next four points to tie the match at 24-all. Evans found the court to put the Mountaineers up 26-25, but back-to-back-to-back kills from Kansas ended the set in favor of the Jayhawks.

Kansas jumped out to a 6-2 lead in set two, using a trio of WVU attacking errors on a 4-0 scoring run. Following a WVU timeout, Levak put down a kill to bring the Mountaineers within three. West Virginia then scored three more in a row to tie the match at six apiece, but Kansas used a run of its own midway through the stanza to take an 11-8 lead. WVU bounced back, tying the match at 18-all following an attack error from KU. The squads then traded points before the Jayhawks tallied two straight to put them on top, 23-20, forcing the Mountaineers into a timeout. Kansas walked away from the break scoring two of the next four points to claim the set, 25-22.

WVU started the third set in a 6-3 hole, but quickly worked its way out using a service ace from Slinde and a kill from Evans to score three straight and tie the match at six apiece. Kansas hung around, but West Virginia continued to put in the work, using a pair of scoring runs midway through the set to take a 21-15 advantage. The Mountaineers finished off the set scoring four out of the last six points for the 25-17 victory to trail 2-1 in the match.

Attempting to carry the momentum into the fourth stanza, WVU tied the set at 4-4 on a kill from Katie DeMeo. Following a service error from West Virginia, Kansas rolled to three straight points for an 8-4 advantage. The Jayhawks then used another run midway through the fourth set to go up 15-7, but a kill from Swanegan stopped the Jayhawks’ run once again. However, the Mountaineers never found the momentum to match the Jayhawks, as back-to-back kills put KU up by 10. Another kill put the Jayhawks at match point with a 24-15 lead and though Swanegan buried the ball to keep the match going, Kansas came through with its 56 kill of the evening for the 25-17 win and the 3-1 triumph in the match.

The Jayhawks finished the match hitting .273 with 56 kills and 60 digs. Kansas’ Madison Rigdon had a team-high 17 kills for the Jayhawks, followed by Kelsie Payne with 12.

Looking ahead, West Virginia heads to Waco, Texas, for a 7 p.m. ET tilt with Baylor on Saturday, Oct. 7.