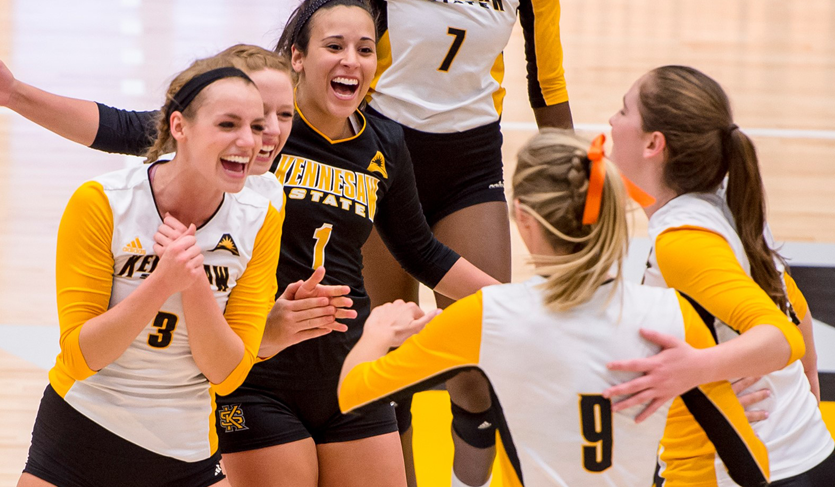 Kennesaw State picked up a crucial win in the Atlantic Sun Conference race, knocking off fellow 10-1 side Jacksonville via sweep on Saturday, to take sole possession of the league lead.  Current Photo via Kennesaw State Athletics

KENNESAW, Ga. – Kennesaw State picked up a crucial win in the Atlantic Sun Conference race, knocking off fellow 10-1 side Jacksonville via sweep on Saturday.

The win plants the Owls all alone in the league’s top spot with just one week to go. KSU can secure at least a share of the regular season title on Friday against Stetson. Both Kennesaw State and Jacksonville have two league matches remaining with the Owls having the inside track to the title with a match lead and the season series even.

Middle blocker Rachel Taylor chipped in nine kills in her Senior Day match, while hitting at a match-high .571 clip and putting up two solo stuffs. Junior middle Liesl Engelbrecht (7) and senior outside Anaiah Boyer (6) and junior outside Sydni Shelton (5) followed. Engelbrecht paced the team at the net with six blocks, while Shelton registered four rejections. Boyer (13), senior libero Katarina Morton (13) and freshman defensive specialist Karlee Groover (10) accounted for 36 of the team’s 55 digs in the win.

Set 1 saw the Owls turn a two-point edge (8-6) into a eight-point margin (17-9) with help from three Chastang kills and two Dolphin errors. Jacksonville did not give up, however, making it a four-point game at 21-17 as Nusthtayeva turned in a kill and solo stuff. A service error gave KSU its first set point try at 24-18 and Chastang ended the stanza with a kill three points later.

Kennesaw State wasted no time seeking control of Set 2, jumping ahead 13-4 early. Five JU errors and kills by five different players pushed the Owls to the lead, which they would not relinquish. Jacksonville would get no closer than seven the rest of the way (18-11). KSU wrapped up the win with a 7-1 run, with the final three points coming on a kill and two stuffs by Boyer.

Jacksonville would not give up the match without a fight, turning a 6-1 deficit into a 9-7 advantage as Wehner heated up to the tune of four kills. After four ties, the last at 12-all, Kennesaw State built a four-point cushion at 21-15 as Shelton, Engelbrecht, Taylor and Chastang supplied the offense. Three straight Chastang putaways capped the Owl rally. A Shelton kill made it 24-18 KSU, but Mallory Mattingly kept the set going with two of her own. A Taylor putaway wrapped up the sweep and victory at 25-20.

Kennesaw State decisively defeated the Jacksonville Dolphins in a first-place matchup on Senior Night in the KSU Convocation Center on Saturday, November 4.

Coming into the match, both teams sat at 10-1 in the ASUN and the Dolphins were the one blemish on the Owls record, but these seniors and this team weren’t going to be denied elevating their play to claim their 11th sweep of the season. It also secured a perfect 10-0 record in the KSU Convocation Center this season.

Even though it was Senior Night, it was freshman Lauren Chastang that stepped up in the match and led Kennesaw State with 10 kills hitting .360.

HOW IT HAPPENED:
The Owls were all business from the start of the night leading almost the entire way through the match holding Jacksonville to a hitting percentage of .046 in the match.

In the first set, KSU built a lead by as many as nine before ending the set 25-20. Chastang came out on fire finishing the first set with six kills hitting .545.

Kennesaw State didn’t give away any momentum in the second set building a 10-point lead almost out of the gate and finishing the set off 25-12. The Dolphins hit -.188 in that second set with six kills and 12 errors.

In the beginning of the third set, it seemed like KSU may run away with it again racing out to a 6-1 lead, but Jacksonville finally found some footing and ran off seven straight points to take their first lead of the match.

With the Owls leading 16-15, they went on a 5-0 run to get some breathing room. They ended up having three match points and closed it out 25-20 to clinch the sweep.

SCHUNZEL QUOTE:
“It’s hard to imagine a better way for this senior class to go out in the Convo in front of a great crowd like that in a match that meant so much in the conference race. I could not be prouder of our mentality tonight, the way we prepared, the way we handled the emotions of the night and the way we controlled the match from start to finish.”

INSIDE THE NUMBERS:
· With the victory, Kennesaw State moves to 17-4 overall and 11-1 in ASUN play. The Owls sit at the top of the standings by one game and now own the tie breaker over Jacksonville.
· The Owls were a perfect 10-0 at home this season. It was the first time ever KSU has been undefeated at home. Out of those 10 wins, the only two matches that weren’t sweeps were against Troy and Lipscomb.
· All seven seniors saw action tonight in the match against Jacksonville.
· For the match, the Owls defense held Jacksonville to hitting just .046. The team had 10 blocks with Liesl Engelbrecht leading the way with six of them.

UP NEXT
Kennesaw State will travel to Stetson and FGCU to finish the regular season off. The Owls will play Stetson on Friday, November 10 and FGCU on Saturday, November.

Jacksonville University volleyball returns to Duval with a split on the weekend after falling at Kennesaw State in ASUN Conference action, 3-0, Saturday evening.

“Tonight was about growth,” stated Head Coach Julie Darty. “I credit Kennesaw for having a great scout and game plan on us because they were lights out. The things that make us who we are were kind of forgotten, and when we forget our identity, we are sort of in scramble mode and that’s not us.

“I know that we got better today for the long run and we can learn from this; I know we can bounce back. It’s about going home, getting to work, taking care of what we need to do, and finishing the regular season in a way that we know how.”

“Kenzie had another great night; she had another big night anchoring our defense. Alleah put up some solid numbers with a double-double, but the total team effort just wasn’t the same,” Darty added. “We will be ok; we will get back to work.”

Jacksonville (16-9, 10-2 ASUN) rallied from three points down early on in the opening set, as Cooks and Nushtayeva posted back-to-back kills to bring the Dolphins within one, 6-5. Despite a pair of kills from Mattingly and Stamatis, the Owls (17-4, 11-1 ASUN) surged ahead, 19-10. Not to be deterred, the Dolphins fought back on a 7-2 rally as Swan, Wehner, and Nushtayeva added points to cut Jacksonville’s deficit to four, 21-17. JU answered each of the Owls’ three points, but Kennesaw State took the first set, 25-20.

Facing a 13-4 deficit in the second game, Jacksonville used a 3-1 run courtesy of kills by Nushtayeva and senior Cristina Finan to half the Owls’ advantage, 14-7. A second 4-1 Dolphin rally down the stretch showed promise, but Kennesaw closed out the set on a 7-1 run to take the 25-12 win.

Following the intermission, Jacksonville erased a five-point Kennesaw State lead in the third as four kills from Wehner highlighted an 8-2 rally. Protecting their 9-7 advantage, the Dolphins held off an Owl surge, 12-11. However, a late five-point run pushed the hosts ahead as KSU took the third set, 25-20.

The Dolphins close out the regular season next weekend when NJIT and USC Upstate visit Historic Swisher Gymnasium. Jacksonville takes on the Highlanders Friday, Nov. 10 and square up with the Spartans Saturday, Nov. 11 on Senior Night. Both matches are set for 6 p.m.