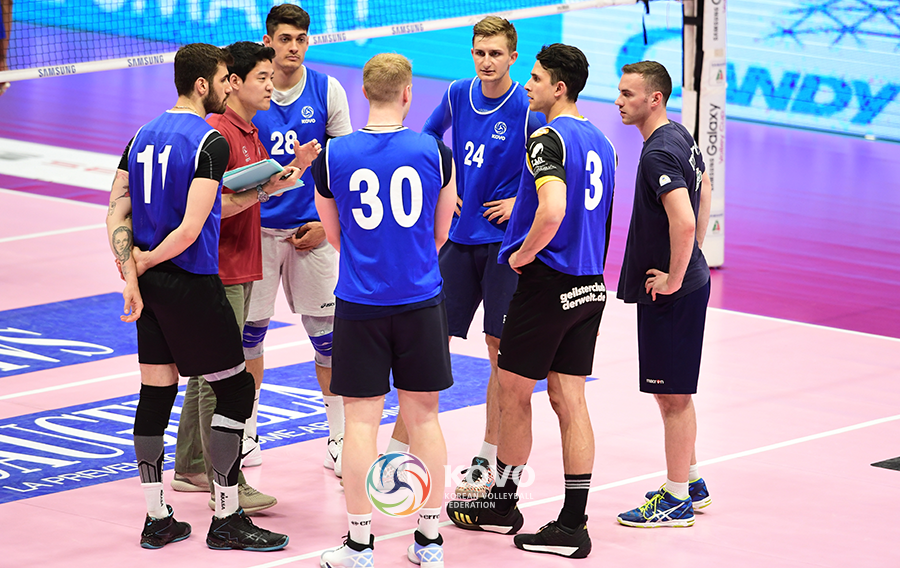 The men’s teams in South Korea’s V-League has signed 7 foreigners for this upcoming season. The decision comes after a tryout was held last month for interested players; those chosen are guaranteed of a minimum salary of $150,000, with a club-determined bonus.

Earlier this month, 6 women’s signees were announced through the same system.

The biggest name absent from the list of 7 is 29-year old, 6’10” middle blocker Kevin Le Roux, who is a starter on the French National Team. The lone American man to try out, Sam Holt, also wasn’t chosen.

Simon Hirsch (Kepco Vixtorm): Hirsch is a 6′ 8″ opposite from Germany. He won the 2017 European Championship silver medal. He has been playing in Italy for Gi Group Monza since 2014 and this will be his first season in South Korea.

Alexandre Ferreira (KB Stars): Ferreira is a Portugese outside hitter playing in the V-League for his second season. He previously played in Italy and Turkey, including playing in the 2013 Club World Championships with Trentino Diatec.

Liberman Agamez (Woori Card Wibee): Agamez is a 6′ 10″ Colombian outside hitter with extensive international experience. He has played in Greece, Turkey, and Iran winning 2017 Greek Cup Most Valuable Plaer, 2013 Turkish League Best Scorer and Most Valuable Player and the 2015 World Cup Qualifier Most Valuable Player. Last season he played in Portugal for Sporting Clube de Portugal, restoring the team to former glory by bringing home the Portugese Championship after being out of competition for 22 years.

Thijs Ter Horst (Samsung BlueFangs): Ter Horst began playing professionally in 2015 when he joined the Italian team Copra Elior Piacenza. Since 2016 he has been playing in South Korea for Samsung BlueFangs. The club had a 7 season championship streak from 2007-2014. Ter Horst and company will be looking to reclaim that dominance after making it to the playoffs last season.

Mitja Gasparini (Korean Air Jumbos): The 6′ 8″ Gasparini has a long international career starting in 2005 when he played for ACH Volley in his home country of Slovenia. Since then he has played in Greece, Italy and Poland including winning a silver medal at the 2011 FIVB Club Championships. He has played in South Korea since 2016 and this will mark his third season there.

Yosvany Hernandez (Rush Cash OK): Hernandez is a 6′ 6″ Cuban outside hitter who has played all around the world for various club teams including Belarus, Saudi Arabia, Indonesia, Egypt, Turkey and now South Korea.