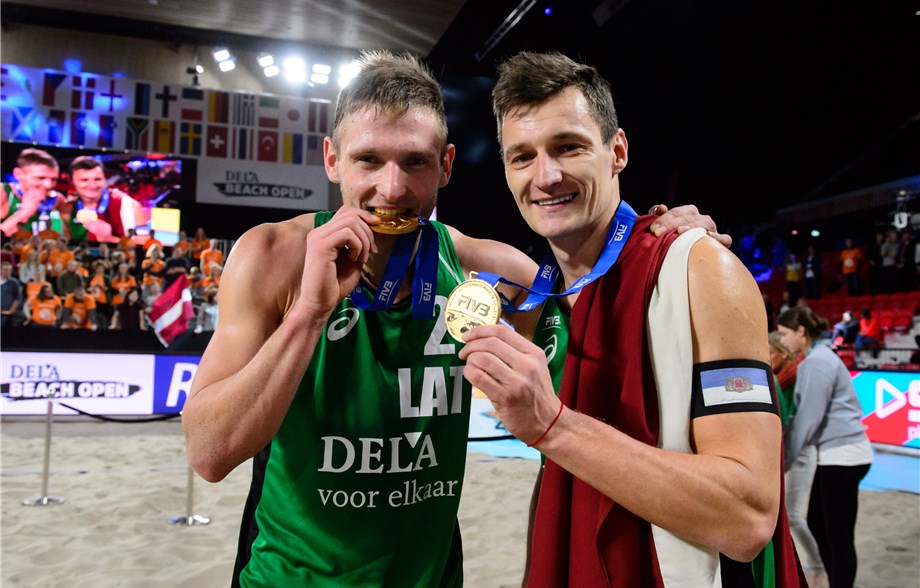 The pair, which had only played in a zonal event in Moscow in December, topped Poland’s Piotr Kantor and Bartosz Losiak 21-14, 21-12 for the title.

“I think after this tournament it will just get harder,” Plavins said. “We are still a new team and we will make a lot of mistakes, but this tournament we played really well and made no mistakes and got lucky sometimes, but we’re still happy we’ve won the final.”

It marked the first gold for Tocs, while Plavins, the 2012 Olympic bronze medallist won gold with former partner Janis Smedins in X.

Plavins/Tocs made the final by rallying for a three-set win over No. 23 seeded Dutch pair Christiaan Varenhorst and Jasper Bouter in Sunday morning’s semifinals (19-21, 21-19, 15-11).

The bronze medal match was an all-Dutch affair. In the end, top seeded Alexander Brouwer and Robert Meeuwsen bested Christiaan Varenhorst and Jasper Bouter 21-18, 21-14 for the medal. It marked the first podium finish for Brouwer and Meeuwsen since winning the Xiamen Three-Star in April 2017. It was just the third tournament for Varenhorst/Bouter.

“We wanted to win this tournament and before the match we said it wasn’t really about the medal,” Brouwer said. “Of course it is brilliant, but another bronze is a bit hard for us.”