Lee Double-Double Leads No. 2 Penn State Past No. 10 Michigan State 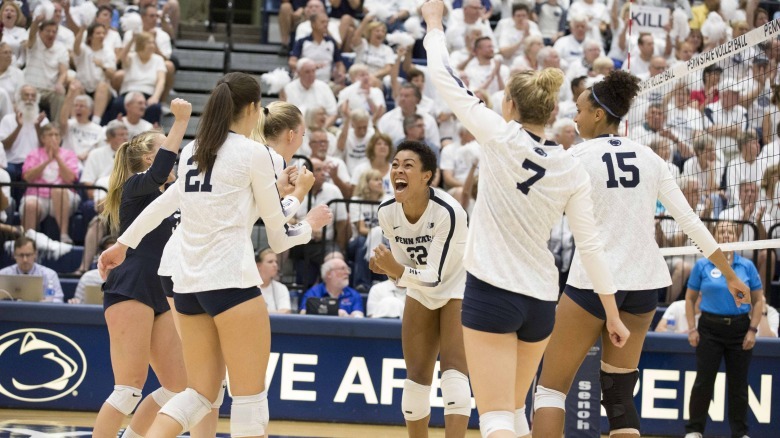 Junior outside hitter Simone Lee turned in a 17-kill, 13-dig double-double and served up two aces to pace No. 2 Penn State to a four-set win over No. 10 Michigan State. Current Photo via Penn State Athletics

UNIVERSITY PARK, Pa. – Junior outside hitter Simone Lee turned in a 17-kill, 13-dig double-double and served up two aces to pace No. 2 Penn State to a four-set win over No. 10 Michigan State.

Redshirt senior outside Autumn Bailey was tops among the Spartans with 17 kills and 10 digs, while redshirt senior outside Brooke Kranda (12), senior outside Holly Toliver (11) and senior middle Alyssa Garvelink (10) also turned in double-digit kills efforts. Garelink put up a match-high five blocks, while Toliver added four stuffs, 10 digs and a team-best three aces. Senior setter Rachel Minarick paced the defense with 15 digs, to go with her 49 assists.

Penn State was strong out of the gate, throwing down a .419 hitting effort with just two errors, while MSU committed eight miscues. The teams were knotted at 12 midway through Set 1, before the Nittany Lions capitalized on two Spartan errors and a block by Tori Gorrell and Thelen to gain a little breathing room at 15-12. Michigan State was within one at 15-14, but PSU held them at bay the rest of the way, capping the win with a 10-4 run. A Washington kill marked the final point.

The Spartans rebounded in Set 2 to post a match-high .452 hitting effort, while limiting the Nittany Lions to a .069 clip. MSU raced out to a 15-6 lead in the stanza as Garvelink notched four kills and Toliver recorded two kills and two blocks. Michigan State upped the advantage to 10 at 21-11. The teams split the final eight points of the stanza, with MSU closing out the 25-15 win on a PSU hitting miscue.

After splitting the first 16 points of Set 3, Penn State pulled away with five straight points including three Washington kills. The Nittany Lions pushed ahead by six at 20-14 as Thelen notched three kills, but the set was far from over. The Spartans sliced the margin to one at 22-21 as Toliver recorded three kills and a block. A Thelen kill put PSU at set point at 24-21, but MSU held off three tries with help from putaways by Bailey and Garvelink. After thwarting another Nittany Lion attempt at 25-24, a kill and an ace by Toliver gave MSU a shot. Penn State earned three more set-point tries and converted on the last at 29-28 on a stuff by Nia Reed and Washington.

PSU closed out the night by outhitting MSU .324 to .139. The Nittany Lions jumped out to a 7-1 lead with two kills by Lee and three Spartan hitting errors. MSU scored four in a row, including two Bailey kills to pull within three at 10-7. Penn State raised its advantage from five (16-11) to nine (22-13) with a 6-2 run including kills by three different players. A Thelen putaway gave PSU its first set point try at 24-15, and Washington capped the set four points later.

Three Spartans finished with double-doubles: Autumn Bailey shared the match high of 17 kills, and had 10 digs. Rachel Minarick had 49 assists and a match-best 15 digs, and Holly Toliver had 11 kills, 10 digs and three acces.

After the two squads traded the first two sets – which included a 25-15 MSU win in the second set – the teams staged an entertaining third frame that went to extra points. MSU trailed by as many as six points in the frame, but battled back with a late 8-3 run to tie the set at 24-24. The point-for-point battle ensued with the home team finally coming away with a 30-28 victory to take a 2-1 match lead. The home team carried the momentum into the fourth, racing out to a six-point edge in the first eight points and kept MSU from gaining any momentum back, despite cutting it to 10-7. The Nittany Lions won the fourth by a 25-18 edge to seal the 3-1 victory.

Tonight was game seven of the Big Ten season for the Spartans, and they faced their fifth opponent that was ranked seventh or higher in the AVCA National Poll. MSU had previously beaten Minnesota (No. 1), and twice beaten Wisconsin (No. 5, No. 7) and fallen on the road at No. 4 Nebraska and now at No. 2 Penn State. The Nittany Lions, now at 16-1 and 6-1 in Big Ten play, share the conference lead with the Cornhuskers, while MSU is a game back at 5-2.

The Spartans head to Rutgers for a Saturday match to complete the week’s action. Gametime is 7 pm.

Rachel Minarick had a double-double with 49 assists, 15 digs, and added a pair of kills.

MSU dropped its second Big Ten match of the season – both B1G losses came on the road to teams in the top four of the AVCA poll.

Minarick had her fourth double-double of the season, while Toliver had her third. Bailey had her fifth of the season – all of which have come in Big Ten games.

Megan Tompkins had seven kills, hit a match-best .429, and had two blocks (one solo).

GAME REPLAY
SET ONE: Both teams came out with big swings and aggressive play from the opening set, and the largest lead for either team was two points. With MSU up 12-10, the Nittany Lions went on a 5-0 run to pull ahead 15-12, forcing the Spartans into their first time out. Garvelink had back -to-back kills out of the break to trim it to a one-point game. With the home team up 18-16, a shot that kissed the back left corner by Washington and a Frantti kill off the block allowed PSU to go up four, at which point MSU called its second time out. Washington put up a big block for PSU out of the TO to make it a five-point game. The teams traded service errors that made it 22-17, and the Nittany Lions poured it on from there to close out the set, 25-18 after Kranda fended off set point. It was a 15-6 run to end the set for the home team, as PSU hit .419 (15-2-31). MSU hit just .100 in the frame with 12 kills and eight errors, with Garvelink, Kranda, and Bailey each recording three.Samantha McLean had five digs in the set.

SET TWO: MSU came out on fire in the second set, building leads of 5-2 and 9-4, at which point Penn State called its first timeout of the night. MSU had six kills on nine swings to build that lead, and PSU matched its first set total of two erros before the break. Up 10-6, MSU used a 5-0 run to take its largest lead of the night (Toliver and Garvelink each had two kills and a block), but the home team countered with a 4-1 run to trim it to six, 16-10. The Spartans were hitting better than .500 in the set (13-2-20) after Tompkins gave MSU an 18-11 lead, which was followed by a crafty ace from Toliver, who kissed the right line. A block by Minarick and Tompkins re-established a nine-point lead for the visitors, and PSU called its second timeout of the set. The Spartans remained in control and closed it out on a 4-2 run to win the set 25-15, hitting .452 (17-3-31) while recording an ace and four blocks – generating 22 points. THe home team had just eight kills against six errors, hitting .069. Kranda and Garvelink each had four kills, and Toliver added three kills and two blocks (one solo).

SET THREE: Tied at 7-7, PSU went on a 5-1 run to pull ahead 12-8, with three of those five points coming from Washington kills. The home team opened with seven kills on 16 swings, while MSU committed three errors (all shots out of bounds)- but had just five kills on its first 15 swings. MSU trimmed it to three (14-11) on Kranda kill and Garvelink block (her fourth of the match), but Heidi Thelen had three kills in a five-point sequence to push the lead to five fo Penn State, 18-13, and MSU called time out. With Penn State up 20-14, a Bailey back-row attack stopped a run, but a Washington kill got the sideout. MSU trimmed it down to four on kills from Garvelink and Toliver, to make it 21-17, and after the teams traded errors, Kranda stepped to the line to serve. A crafty shot by Toliver extended MSU’s run to 4-1 when she sent it off the hands of the defender over the block to cut it to three at 22-19. That forced Penn State into a timeout, but and the Spartans went back to Toliver after the hiatus for her third kill of the run. Garvelink and Toliver teamed up on a block to trim it to one, but a kill by Simone Lee made it 23-21. A Thelen kill got the home team to set point with a three-point lead, but MSU would not roll over – the Spartans got the sideout on a Garvelink kill, and then a Bailey kill off the block forced PSU to call its second time out with a 24-23 lead. MSU tied it at 24, at which point the teams engaged in a point-for-point battle – each team took the lead, including a 26-25 edge on a Toliver ace. The set overall featured 11 tie scores and three lead changes, and with the teams tied at 28-28, NIa Reed’s kill followed by a block by Reed and Washington closed it otu for the home team, 30-28. Bailey had six kills in the frame to lead the Spartans, while Toliver had five and Kranda added four.

SET FOUR: Carrying over the momentum from their set three victory, the Nittany Lions rolled out to a 7-1 lead in the fourth. The Spartans trimmed it down to three at 10-7 with the help of a 4-0 run, but were forced to call time out after the Nittany Lions pushed it back to five on a Lee kill and MSU hitting error. PSU kept coming and pushed its lead to seven (19-12), and then nine (22-13), but the Spartans fought to the final – MSU fought off match point with a Kranda kill and a Minarick ace, then a PSU error made it 24-18. Penn State called a timeout to regroup, and got a finishing kill from Washington to seal the win for the home team. Bailey finished with five kills in the set, as MSU hit .139 (12-7-36) to Penn State’s .303 (13-3-33).