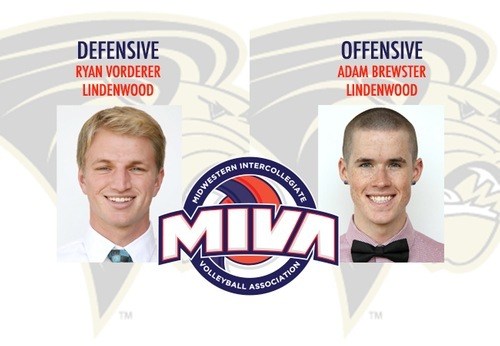 Lindenwood has earned both Midwestern Intercollegiate Volleyball Association Players of the Week, for the period ending Feb. 26. Adam Brewster... Current Photo via MIVA

Sophomore setter Adam Brewster for Lindenwood averaged 11.22 assits per set in matches with Ball State and Fort Wayne to earn the Offensive honor. He also added three aces and a pair of kills in the matches. He helped the Lions to their first win of the season in a 3-2 victory over Fort Wayne.

Lindenwood libero Ryan Vorderer averaged 3.56 digs per set last week in nine sets. In the Lions’ four-set loss to Ball State, he recorded 12 digs. He returned the next night to notch a career-high 20 digs in a 3-2 win over Fort Wayne.

News courtesy of the MIVA.