Lipscomb Takes Out Northwestern in Four 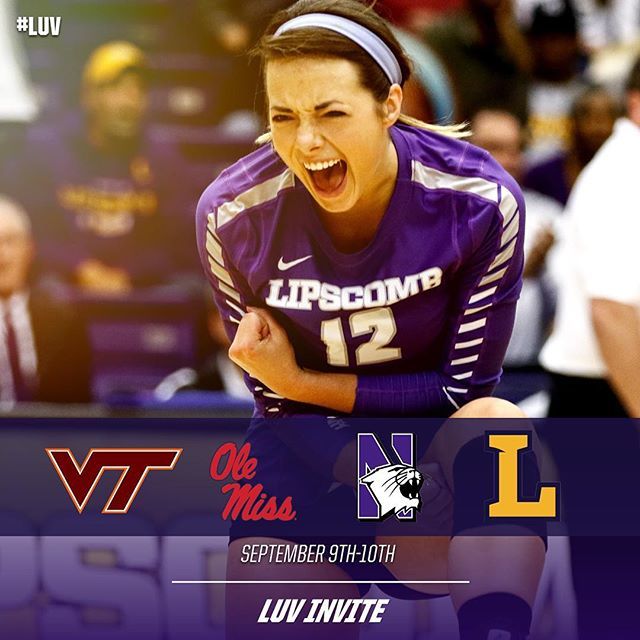 The Lipscomb Bisons volleyball team (Atlantic Sun Conference) fought and clawed their way into a 3-1 defeat over the Northwestern Wildcats in the Lipscomb Invitational this weekend.

Lipscomb started fighting the Big Ten team early, forcing the first set past the 25-point mark to win 32-30 in one of the highest scoring games of the weekend. Northwestern rebounded in the second set with a solid 25-16 victory, but the Bisons broke the Wildcats for the third and fourth sets.

In the third game, the score was tied 20-20 but Lipscomb scored 5 straight points from the Bison offense that had 58 kills during the match. Lipscomb was starting to suffer some exhaustion in the fourth set in their third match of the day, but they were able to keep up their momentum to take the win.

Although Northwestern lost the match, the Wildcats were still able to make history. Maddie Slater, NU’s senior middle blocker, had a career-high 14 blocks, and only the second-most that any Wildcat player has had in a single match. Sabel Moffett was the last NU player to reach that level in 2010 against Minnesota.

Northwestern had 22 blocks total but 19 of them came in the first two sets, leaving ample opportunity for Lipscomb to capitalize on the net.

NASHVILLE, Tenn. – It was definitely not a life or death situation for the Lipscomb volleyball team. But in order to prevail against Northwestern they had to get tough and mean.

The Lady Bisons closed out the four-match first day of the Lipscomb Invitational with a grinding 3-1 win over Northwestern from the Big 10 Friday night at Allen Arena.

“I told our players at the break that it was going to be a street fight and we were going to have to battle with them,” Lipscomb coach Brandon Rosenthal said. “In the end all of the stuff we do in the weight room, in conditioning and in practice puts us in a position to win.

“I think it was the most grinding match we have played this season. The Texas match was a little bit cleaner. Sometimes the harder part is to play a match when it doesn’t make any sense. You look at the numbers on this match and you just scratch your head. We had to find a way. At the end the only letter that matters is a `W’.”

Earlier in the day Lipscomb swept Ole Miss from the Southeastern Conference 3-0.

Lipscomb opened with a 32-30 win in set one but Northwestern rebounded in set two for a 25-16 decision. Lipscomb came back from the break to win set three 25-20 and then closed out the match with a 25-23 victory.

“Northwestern did a great job of taking away our energy in the second match, but it takes three sets to win,” Rosenthal said. “We said let’s focus on getting that energy back and build on it.

“We almost let it slip away in set three at the end. It was 20-20 and we scored five straight points. In set four it got a little touch and go but being tired and playing two matches in a day is going to affect that.”

Saturday they close out the Invite facing Virginia Tech, 4-4, at 2:30. Ole Miss and Northwestern open the day with a 12:30 p.m. match. It is the second straight week Lipscomb has played an Atlantic Coast Conference team. The Hokies lost Friday to Northwestern and Ole Miss.

“We have to get greedy against Virginia Tech,” Rosenthal said. “We scheduled three teams and we want to get three wins. Virginia Tech is going to be hungry.”

Outside hitter Carlyle Nusbaum became the first Lipscomb player this season to record a double-double with a match-high 19 kills and 15 digs.

“Carlyle was tremendous in set four defensively and offensively,” Rosenthal said. “We talked about in set four that we had to get grittier and get dirty. We had to outwork them and the girls responded.”

Right side Taylor Racich also finished in double figures in kills with 12.

Libero Brittany Thomas led Lipscomb with 16 digs. She also led the team with a pair of service aces.

“I thought Brittany’s serves were really on point,” Rosenthal said. “And the passing between Lauren Anderson, Brittany and Jenny Phelan was solid.”

“This is exactly what we signed up for in the sense of playing good teams from tough conferences and finding ways to win,” Rosenthal said. “This was a good stepping stone to what I think could be something pretty special.”

Up next: Lipscomb heads to Kentucky Sept. 16 and 17 to face Louisville and the University of Kentucky.

Slater’s 14 blocks (1 solo, 13 assisted) were a career high and tied for the second-most ever by any Wildcat player in a single match. The last Northwestern player to reach that mark was Sabel Moffett on Oct. 10, 2010, against Minnesota.

Chicago’s Big Ten Team racked up 22 blocks overall, 19 of which came in the first two sets. That final total ranks fifth all-time for a single match in program history and was the best mark since Oct. 13, 2000, when the Wildcats had 24 vs. Michigan.

Other notable defensive performances included a career high 10 blocks from Kayla Morin. Gabrielle Hazen had seven, one off of her career best. All told, seven Wildcats recorded stops at the net.

Lipscomb was able to eek out the win, 3-1, with the first and final frames both decided by the narrowest of margins.

Chicago’s Big Ten Team came out firing on all cylinders in the second set, jumping out to a 14-7 advantage and winning 25-16 to tie the match at one.

Lipscomb mustered the final five points of the third set to win 25-20 and then just edged NU in the fourth, 25-23, by scoring the final two points.

Northwestern had seven players get on the board with kills, and Slater, Morin and Taylor Tashima all hit over .300, but the Wildcats hit just .176 as a team. Tashima just missed another double-double with 37 assists, eight digs, six kills, three blocks and an ace.

Up Next: The Lipscomb Invitational wraps up against Ole Miss.