Louisville Comes Back from Down 0-2, Clinches Regular Season ACC Title 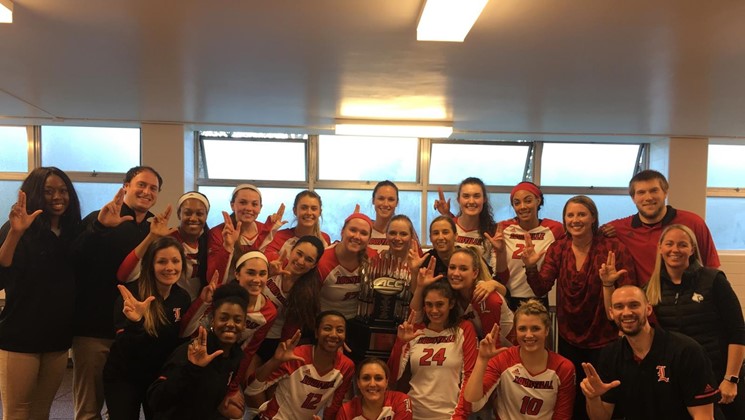 The Louisville Cardinals got a 20-kill effort from sophomore outside hitter Melanie McHenry and a 10-kill, 10-block performance from junior middle blocker Jasmine Bennett to help secure a five-set come-from-behind win over Syracuse to clinch the Atlantic Coast Conference title on Saturday.  Current Photo via Louisville Athletics

SYRACUSE, N.Y. – The Louisville Cardinals got a 20-kill effort from sophomore outside hitter Melanie McHenry and a 10-kill, 10-block performance from junior middle blocker Jasmine Bennett to help secure a five-set come-from-behind win over Syracuse to clinch the Atlantic Coast Conference title on Saturday.

With a win on Saturday, Pittsburgh can earn a share of the ACC title, although Louisville owns the tie-breaker for the NCAA berth.

Syracuse took an early 5-3 lead in Set 5 behind two kills and an ace by sophomore outside Kendra Lukacs and led 9-7 after the changeover with help from kills by senior middle Amber Witherspoon and freshman outside Ella Saada. Louisville turned the tables with a 7-1 run, including two McHenry kills and two blocks and a kill by Bennett, to go ahead 14-10. A block and a hitting error kept the match going, before Bennett issued the final putaway.

That #FridayFeeling when you clinch an automatic bid in the NCAA Tournament! #ACCVolleyball #L1C4 pic.twitter.com/tpU8m3F2Mb

Syracuse used a 5-0 midset run to grab an 11-7 lead in Set 1. The Orange held Louisville at bay despite six ties, last at 21, before the Cardinals scored three straight to go up 24-22. Syracuse countered with three in a row to earn its own set-point try at 25-24. A McHenry kill tied it up, but a Witherspoon kill and UofL hitting error capped the 27-25 Orange victory.

The teams were knotted at 15 midway through Set 2 when Witherspoon notched two kills and two kills to give Syracuse a 19-16 edge. The Cardinals would get no closer than one the rest of the stanza. A Mariia Levanova kill made it 24-21 and a Sand putaway wrapped up the 25-23 win.

Louisville charged out of the intermission to the tune of an 11-6 lead, including two kills and two blocks by Bennett and putaways by four other players. Later, a 3-0 run, incluidng an ace by Sauer, made it 17-11 Cards. Syracuse chipped away, narrowing the gap to two at 22-20, but UofL scored three of the final four to extend the match at 25-21.

Clark downed four kills to give Louisville a quick 8-2 lead in Set 4. Syracuse pulled wihin three at 15-12, but the Cardinals cruised to a 25-15 victory to send the match to a decisive fifth set. DeJong notched three kills and McHenry added two in the final stretch of the stanza.

Melanie McHenry had 20 kills, 12 digs and four blocks to lead the University of Louisville to a 3-2 win over Syracuse and clinch at least a share of the ACC crown Friday afternoon in Syracuse.

UofL moves to 24-6, 18-2 in the ACC with the 25-27, 23-25, 25-21, 25-15, 15-12 comeback win.  The Cardinals currently share the title with the Pitt Panthers, who are playing tomorrow afternoon.  A loss by Pitt would give UofL the crown outright, while Pitt win would make them co-champions with the Cards holding the head-to-head tiebreaker advantage.

UofL hit .179 with 14 blocks and three aces, with the Cards surviving eight service erorrs and four blocking errors. Louisville got 14 kills from senior Maggie DeJong and 10 from Jasmine Bennett.  The Orange hit .142 with 15 blocks and five aces, committing 12 service errors.

The two teams traded points early in the first and after tying at seven, Syracuse went on a 5-0 run to go up 12-7. The Cards scrambled back to tie at 17 and the teams traded points for the next segment of the set.  UofL used a 3-0 run to get to 24-22 lead but scored five of the last six points of the set for the 27-25 win.  Melanie McHenry paced the Cards with six kills in the set.

In the second set, neither team could string together a run.  SU led 15-14 at the media timeout and then stretched it to 23-20 on a pair of blocks.  After Louisville called timeout, the Cards scored twice and sparked a SU timeout with a 24-23 lead.  Syracuse scored on a Cardinal miss for the 25-23 win and took a 2-0 set lead into the break.

The Cards used a pair of 4-0 runs to survive the third set. The first one came took the Cards us 11-6 and the other one put them up 17-11.  The Cards seemed to have things rolling at 21-16 but the Orange chipped away and got to 22-19 and sparked a Louisville timeout.  A kill by Jasmine Bennett, a block by Tess Clark  and a kill by Melanie McHenry gave the Cards the 25-21 win.

In the fourth set, Uof L powered out to a 9-3 lead and stretched the lead to 18-12 on three straight kills by Maggie DeJong.  After a SU timeout, the Orange managed just three more points as the Cards powered to a 25-15 win and force a fifth.

Syracuse led 5-3 early in the fifth set before the Cards tied at five and then again at 10 and then used a 5-0 run to go up 14-10. Syracuse held on for two more points until a kill by Jasmine Bennett gave the Cards a 15-12 win.

How It Was Decided
Syracuse trailed 24-22 in the first set but scored three straight points to retake the lead. A Louisville kill evened the score at 25, but a Witherspoon kill and a Cardinal attack error resulted in a 27-25 ‘Cuse victory.

The second set was another closely contested battle, with neither side leading by more than three points. Mariia Levanova played an essential role in a 25-23 triumph. She came off the bench and contributed four kills and four digs for the Orange.

A Christina Oyawale kill trimmed the Louisville lead to two, but the Cardinals ran off three of the next four points to take the third set, 25-21.

Coach’s Thoughts
“I think overall, it was a good game that we played against a very good team and unfortunately we couldn’t sustain our level of play the entire match,” said head coach Leonid Yelin. “Louisville stepped up in the last three sets and we didn’t step up to the level that we needed.”

Of Note
Sand has produced at least 20 digs in four straight contests. Her 495 digs this season is the eighth-highest single-season total in program history.