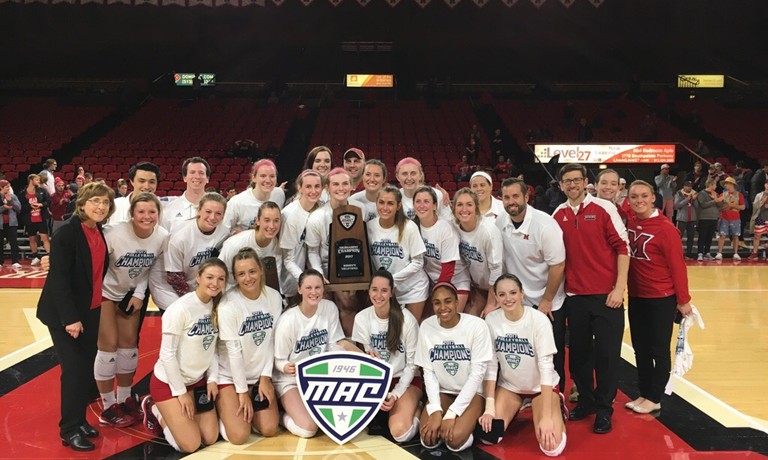 Miami (OH) win the MAC Tournament title for the first time since 2007 with a sweep of Western Michigan Sunday afternoon. Current Photo via Miami Athletics

OXFORD, Ohio – Miami turned in its most impressive performance in the MAC Tournament title match Sunday afternoon against Western Michigan with a sweep of the Broncos, 3-0 (25-21, 25-20, 25-18). The RedHawks’ victory on Sunday was its first MAC Tournament title since 2007.

The RedHawks were led by MAC Tournament MVP Olivia Rusek (13 kills, 6 digs, 2 blocks, .355). She hit her 1,000th kill of her career during set one, and is now the 21st RedHawks to do so. Rusek was joined on the All-Tournament team by teammates Taylor Daignault (7 kills, 9 digs, 2 aces) and Maeve McDonald (team-high 22 digs). Setters Mackenzie Zielinski (18 assists, 10 digs) and Morgan Seaman (15 assists, 7 digs) ran the offense efficiently.

Western Michigan (RPI: 174) were led by freshman outside hitter Rachel Bontrager who had 9 kills, 8 digs, 2 blocks and 2 aces. Bontrager earned All-Tournament honors along with sophomore libero Kathleen Reilly with a match-high 24 digs. Setter Mary Murphy had a match-high 28 assists and 9 digs. Sydney LeMay finished with a match-high 5 blocks.

OXFORD, Ohio — Knowing that Western Michigan had a history of coming from behind in the Mid-American Conference Tournament, the Miami University volleyball team left no doubt as it took a 3-0 (25-21, 25-20, 25-18) win in the MAC Tournament Championship in front of an excited home crowd on Sunday. The RedHawks improve to 23-8 on the season and win the tournament title for the first time since 2007. The Broncos finish the year 18-13.

“Western is a great team,” said head coach Carolyn Condit. “We knew we had to come out and serve and pass well and keep a determination for three straight sets and that’s what we did. I am very proud of my team.”

Senior outside hitter Olivia Rusek took home MAC Tournament MVP honors after her second straight strong performance. She finished with a team-high 13 kills on Sunday, hitting a .355 attack percentage. She also had six digs and two blocks. During set one she recorded her 1000th-career kill, becoming the 21st of Miami’s 1,000-kill club.

Kills by senior right side hitter Katie Tomasic, senior middle hitter Meredith Stutz and Rusek helped Miami jump to a 5-1 lead to begin set one. Kills from sophomore middle hitter Margaret Payne, junior right side hitter Stela Kukoc and Daignault kept the momentum going as the `Hawks increased their advantage to 14-8. The Broncos fought back with a 9-4 run that pulled them to within one at 17-18. Kukoc and freshman setter Morgan Seaman responded with kills that got Miami rolling again. After kills from Daignault and Rusek created set point, Tomasic put down a kill off an assist from redshirt junior Mackenzie Zielinski to finish off a 25-21 win.

Tied at nine in set two, a block by Stutz and Tomasic, a service ace from Daignault and a solo block by Rusek forced Western Michigan to call timeout. Out of the break, Rusek had two more kills as Miami was able to increase the advantage to seven at 18-11. The Broncos cut the deficit to four with three straight points before a kill from Rusek and a block by Kukoc made it 20-14. That proved to be more than enough as the RedHawks finished off a 25-20 victory with a Payne kill.

Miami came out determined to finish the match in set three. Two kills from Rusek, along with kills from Daignault, Kukoc and Stutz helped the Red and White take a 9-6 advantage. WMU fought back to tie the score at 11. Kills from Stutz and Rusek and blocks by Tomasic, Rusek and Payne pushed the advantage to 15-11. After the Broncos scored, three straight from the `Hawks gave them a six-point cushion at 18-12. Western Michigan had one last fight in them as it scored six in a row to tie the score at 18. A kill from Rusek from an assist from Seaman put Miami back on top. That got the RedHawks going again as Kukoc put down three kills during the closing stretch. It was followed by a kill from Daignault that finished off a 25-18 victory and gave Miami the MAC Championship in straight sets.

The RedHawks hit .215 for the match and held the Broncos to a .074 attack percentage. Miami out blocked WMU 9-8, with Stutz, Tomasic and Kukoc leading the way with three blocks each.

OXFORD, Ohio – The Western Michigan volleyball team’s run came to an end on Sunday at Miami University, falling to the host RedHawks 3-0 (21-25, 20-25, 25-18) in the Mid-American Conference Tournament Championship game.

WMU was held to a .074 hitting percentage on the afternoon. Freshman outside hitter Rachel Bontrager led the way for the Broncos with nine kills. Senior Sydney LeMay had eight kills, while fellow senior Oliva Kofie had six kills the final match of their careers. Sophomore libero Kathleen Reillyhad a match high 24 digs and was named to the MAC All-Tournament Team along with Bontrager.

“Miami was great. They made it very very difficult for us,” said head coach Colleen Munson. “We won’t let one match define our weekend that we had. We played, we had a great time and enjoyed the moment. Today was started thinking about winning a championship instead of the process that it took to get us here in the first place. It’s a great lesson.”

“We can’t thank our seniors enough for bringing our culture back to where the expectation is to win a championship and showing us the way to do that. It was something very special this weekend and it came together for us.”

After dropping the first point, Miami jumped out to an 8-3 lead to open the first set and never trailed. The Broncos used a 5-0 run to pull within one at 18-17 but didn’t get any closer with the RedHawks closing out the set 25-21 after a kill by Katie Tomasic.