Louisville Kicks Off 2018 With Two Wins at Cardinal Classic 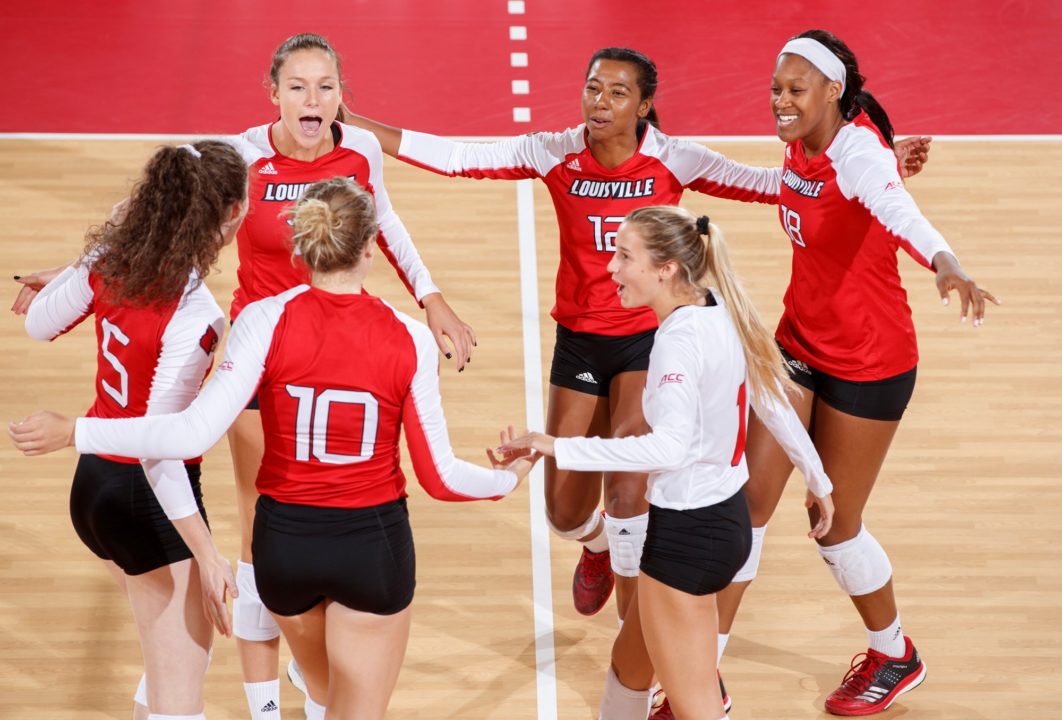 Louisville (RV) started the season with a pair of home victories on Friday with junior outside hitter Melanie McHenry starring in both contests.  Current Photo via Louisville Athletics

Louisville (RV) started the season with a pair of home victories on Friday with junior outside hitter Melanie McHenry starring in both contests. Elsewhere at the Cardinal Classic, UT Martin and Southern Illinois each picked up a victory.

Key Stats: Ten blocks and 10 aces and an efficient offense helped Louisville cruise past UT Martin on Friday. The Cardinals hit .478, while holding the Skyhawks to a -.067 effort. UTM, which hit -.269 in Set 1 and -.158 in Set 3, also managed two aces in the match.

Hannah Phillips was tops among the Skyhawks with eight putaways, while Gintare Mackeviciute tacked on four kills and an ace. Brooke Gyori added 10 digs and an ace.

How It Happened: UofL started off guns blazing with an 11-2 run, including two blocks and a kill by Roe and two Sauer aces. A 5-0 run pushed the margin to 16 at 21-5 and the Cardinals capped the win with three straight points including a McHenry putaway.

Three Rivera aces highlighted a 7-0 run to start Set 2. Five UTM miscues put Louisville up 16-6. The Skyhawks rallied to within three at 19-16, before McHenry took over with four kills to cap the 25-17 win.

Eleven kills helped Louisville to a 17-5 lead in Set 3. A stuff by Emily Scott and Wilma Rivera set up the final point, which came on a Claire Chaussee putdown.

Southern Illinois overcame an 8-3 deficit in blocks with a strong service game and more efficient offense in a four-set win over IUPUI.

After winning Set 3, IUPUI rallied with four straight points to go up 9-8, including two kills and a block by Kaitlyn Johnson. Another 4-0 run made it 17-13 Jaguars, but it was not enough as the Salukis put together a 10-3 run to vault ahead 23-20. Nedoma notched two aces, a kill and a block in the stretch. Kills by Emma Baalman and Brown capped off the comeback and the 25-22 win.

A standout fourth set was the difference in a battle between UT Martin and IUPUI. UT Martin hit .389 in the stanza to close out the victory.

Hannah Oehlberg was tops among the Jaguars with 11 kills, but hit just .114 in the match. Maggie Gibson and Haley Hoffman followed with eight putdowns. Hoffman managed a team-leading five blocks.

UTM jumped out to a 12-4 lead in the final stanza, but IUPUI rallied to go up by two at 15-13 with help from four kills and a block by Wright. Trailing 17-15, the Skyhawks turned the tables with a 5-0 run, including two Phillips putaways and an ace by Rys. Another three-point rally put UTM on the hill at 24-19. A Megan Fair kill wrapped up the match at 25-20.

Key Stats: The Cardinals hit .443 and served up seven aces in their second sweep of the day. UofL also outdid the Salukis 5-0 in blocks, holding their foes to a .135 hitting effort.

Stat Leaders: Melanie McHenry and Jasmine Bennett piled up 10 kills apiece to lead the Cardinals. Bennett hit at a .600 clip, while McHenry rounded out a double-double with 13 digs. Amanda Green tacked on eight kills and an ace.

How It Happened: Louisville made just one error in a .567 hitting effort in Set 1 as the team took a 9-1 lead and never looked back, holding the Salukis at least six points down the rest of the way in a 25-10 win.

Set 2 saw the Salukis jump ahead by as many as six at 14-8 before giving up the lead on an 11-2 run. Two SIU miscues pushed the UofL lead to five at 22-17, before two Bennett putaways set up a final hitting error for the 25-19 victory.

The Cardinals built a 17-9 lead in Set 3 before closing out the match on a final 7-1 run, including kills by Green, Bennett, McHenry and Emily Scott and a final stuff by Scott and Rivera.

“It was a solid first night of the season. We got to see what different people can do and experiment with lineups, so it was really fun to finally play someone other than ourselves,” head coach Dani Busboom Kelly said.