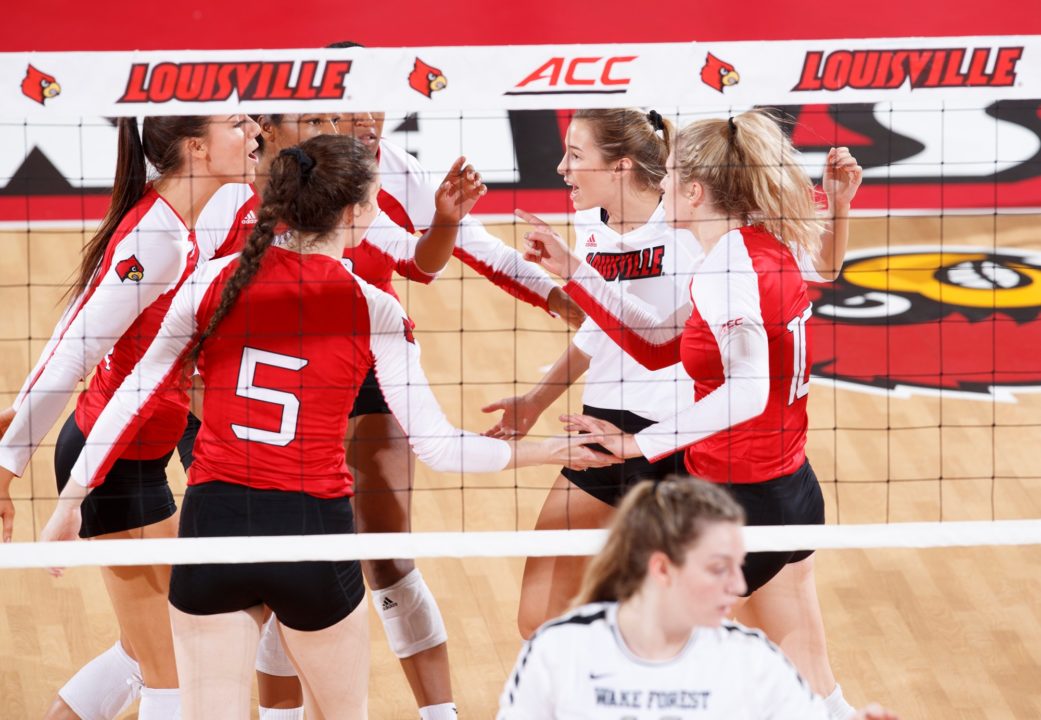 After a slow start, Louisville went on to take a five-set win over Notre Dame to stay perfect in ACC play at 7-0.  Current Photo via Louisville Athletics

After being relocated due to a campus power outage, the Louisville/Notre Dame ACC matchup went on as scheduled at Sacred Heart Academy Gymnasium on Wednesday night. After a slow start, the host Cardinals went on to take a five-set win to stay perfect in ACC play at 7-0.

The Cardinals were outhit in the first two sets, but bounced back after intermission with a .457 effort and carried that the rest of the way, following with .343 and .300 clips down the stretch.

No power, no problem. The Cardinals still put on a lights-out performance to stay unbeaten in the ACC!

After forcing the decisive fifth set, Louisville built an 8-5 lead at the changeover in the final stanza as four different players notched kills. Green added two more putaways to boost the Cardinal advantage to 12-8. Notre Dame cut the margin to one at 12-11 and 13-12 with a block and a kill by Nunge, but a service error and a McHenry putdown finished off the UofL comeback.

Down 6-2 in Set 2, Notre Dame turned things around with 7-1 run including three Niego putaways and three Louisville errors. After a tie at 13, the Irish poured it on to go up five at 21-16 on a Nunge ace. A service error put Notre Dame up 2-0 on the night.

After falling behind 2-0, Louisville wasted no time kicking off a comeback bid, racing ahead 6-1 in Set 3 behind two kills and a block by Scott. Three Notre Dame miscues pushed the Cardinal lead to 10 at 14-4. The Irish were back within five at 21-16, but fell 25-17 on a service error.

Notre Dame grabbed an early 5-1 lead in Set 4, but Louisville worked its way back to a tie at 12 and 13 before going up 15-13 on an Irish hitting error and a stuff by Roe and Rivera. The Cardinals finished off a 7-1 run at 20-14 as Notre Dame committed four more errors. The Irish narrowed the gap to three at 23-20, before Scott and Green ended the stanza.

We had it all along! Cards win fifth over Notre Dame! #GoCards pic.twitter.com/1MqmLA0Th6