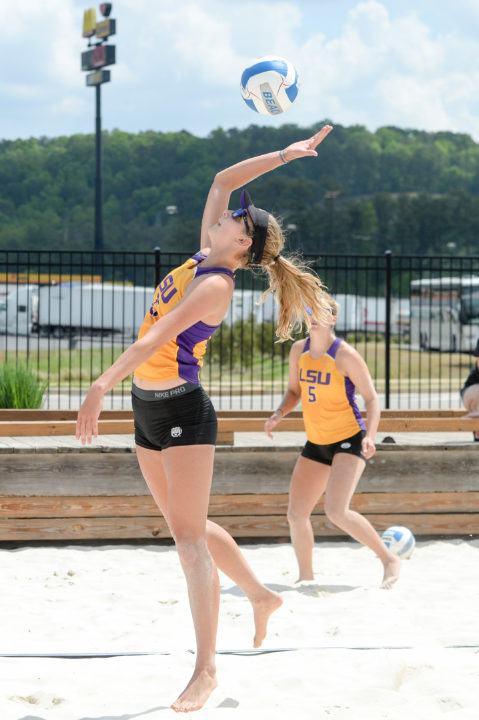 The ninth-ranked LSU Beach Volleyball team is traveling to Los Angeles, California this weekend to compete against the top four teams in the country in No. 4 UCLA, No. 3 Hawaii, No. 2 USC and No. 1 Pepperdine. Current Photo via Todd Drexler, CCSA Photos

The ninth-ranked LSU Beach Volleyball team is traveling to Los Angeles, California this weekend to compete against the top four teams in the country in No. 4 UCLA, No. 3 Hawaii, No. 2 USC and No. 1 Pepperdine.

The Tigers bring a 5-3 record to the East vs. West Challenge at Manhattan Beach Pier. LSU has an opportunity to take a big step as a program this weekend playing the top four teams in the country.

LSU will match up with a pair of L.A. schools on Saturday, beginning with UCLA (5-3) at 10:30 a.m. CT. The Tigers will take on three-time defending national champion USC (5-3) at 2:30 p.m. and have the opportunity to become just the sixth program ever to beat the Trojans. On the final day, LSU will square up with Pepperdine (6-2) at 12 p.m. Sunday, before wrapping the weekend up against Hawaii (3-1), who eliminated the Tigers in the NCAA Championships last season, at 2 p.m.

“The four teams that we’re competing against have been playing really tough competition,” said head coach Russell Brock. “This is where we want to be, playing our best ball against other teams that are playing their best ball.”

LSU is a combined 0-5 all-time against its competition this weekend. The Tigers have already played Pepperdine this season. The two teams competed at the GCU Beach Tournament two weekends ago where the Waves defeated the Tigers 4-1.

“Last year, we had a strong year and were able to knock off some teams that we had never beat before,” said Brock. “We have the opportunity to do the same thing this weekend.”

The Court 1 pair of Claire Coppola and Kristen Nuss continued their impressive start to the season with another perfect weekend. The duo sits at 8-0 now and have won their last seven matches in consecutive sets. Coppola and Nuss are ranked as the No. 1 Court 1 pair on collegebeachvb.com.

The Tigers are 2-5 on Court 2 this season. Haleigh Nelson and Hunter Domanski have gone 2-5 in that spot. LSU has a 4-4 record on both courts, three and five. The main pair thus far on Court 3 has been Maddie Ligon and Olivia Powers and they have amassed a 3-3 record together. Gina Tillis has been a mainstay on Court 5 and has shared time with Lilly Kessler, Riley Young and Emily Hardest to combine for the .500 record.

The Tigers have had a lot of success on Court 4 this season, compiling a 6-2 record. The pair of Emmy Allen and Megan Davenport have gone 5-1 on that court and went 2-0 in that spot last weekend.