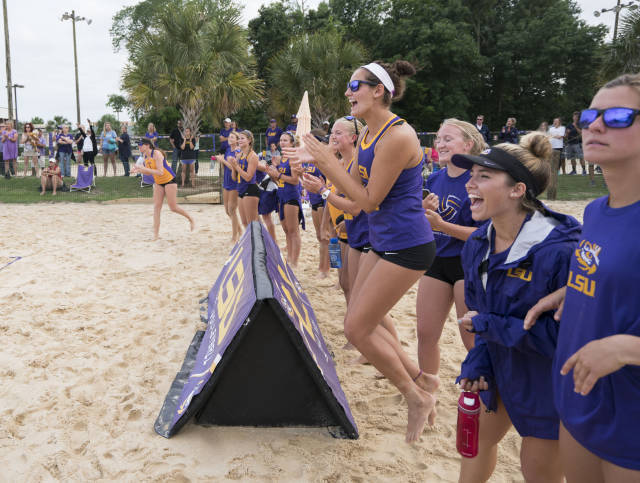 The LSU women’s beach volleyball team will take a stiff lineup into their 2017 season as they look to continue... Current

The LSU women’s beach volleyball team will take a stiff lineup into their 2017 season as they look to continue building the program under new head coach Russell Brock. The Tigers finished last season ranked 10th in the country by the AVCA, but weren’t one of the 8 teams invited to Gulf Shores, Alabama for the NCAA Championship tournament.

If the Tigers fancy themselves as worthy of an invite this year (the 2017 championship is back in Gulf Shores), they’ll certainly have the chance to prove it – they will 6 of the teams that were invited to last year’s championship tournament in the regular season.

After opening up their season with exhibition play at the Collegiate Beach Bash and with an intra-squad scrimmage, the Tigers jump right into the fire with their first official game against last year’s national runners-up from Florida State. They play a double-header on that day against FAU, and the next day play NCAA invitees Stetson at the Stetson Invitational.

A week later, they head to Manhatten Beach, California for the East vs. West invitational that pits the best teams from the eastern U.S. against the best teams from the western U.S. For the Tigers, that means a day 1 double header against NCAA elimination bracket (aka, semi-finalists) UCLA, followed by a matchup with the defending champions from USC. The next day they play Cal Poly and Long Beach State – the latter of whom was ranked 7th by the AVCA last season, but missed an invite to NCAAs.

The schedule cools off a touch thereafter, but still includes two matchups with NCAA quarter-finalists Georgia State, another against quarter-finalists Arizona, and programs expected to make surges forward this year in Arizona State and South Carolina. That’s all before entering the CCSA Championship Tournament from April 21st-23rd and, they hope, a bid to the NCAA Championships from May 5th-7th. The CSCAA includes teams like Florida State and Georgia State – both of whom LSU faced (and lost to) in last year’s tournament, which likely cost them an NCAA invite.

Last season, no team with more than 8 losses qualified for the NCAA tournament. Last year, the Tigers wound up at 20-9. They only had one loss to a team they should’ve beat (TCU in their last game of the season), but also only had one big resume win to hang their hats on (over #10 Grand Canyon). They’ll have to get a few more of the latter this year, but will have plenty of opportunities to do so.