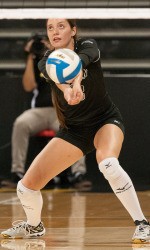 Former TAV club teammates, Lexi MacLean and Mykah Wilson, are set to play together again at TCU in the coming 2017 season.

Wilson, originally from Southlake, Texas, transfers into TCU after spending two seasons with Long Beach State. In her final season with the Beach, Wilson played primarily in the back row having picked up a total of 219 digs. During her freshman campaign, Wilson nabbed the Big West Defensive Player of the Week in the opening week of the season, with 21 digs coming against St. Mary’s. In that season she alternated between libero and opposite hitter throughout the season.

MacLean, who is originally from Frisco, Texas, is transferring into TCU from Arizona State after just two seasons with the team, becoming one of three players that have transferred out since the end of the season. The transfer comes shortly after Sanja Tomasevic was promoted as head coach of the program, as Stevie Mussie left the team after just one season in charge.

In MacLean’s two season with the Sun Devils, she recorded a total of 280 kills, 200 of which came in her 2016 season, ranking her fifth among her teammates. In the 2016 season, MacLean played a total of 84 sets for the Sun Devils. Her career-best kills came to Oakland on September 3, 2016, with 23, while her best hitting percentage came against California on November 19, 2016, at .419.

Among those transferring away from Arizona State are Kylie Pickrell and BreElle Bailey, who have announced they will transfer to NC State, following coach Linda Hampton-Keith. Mmachi Nwoke heads to Kansas and Jasmine Koontz transfers to Ohio State.

Tx Advantage VB announced MacLean and Wilson’s transfer to TCU and back to their home state of Texas: