LSU Fights Back After Dropping Set One To Defeat South Carolina 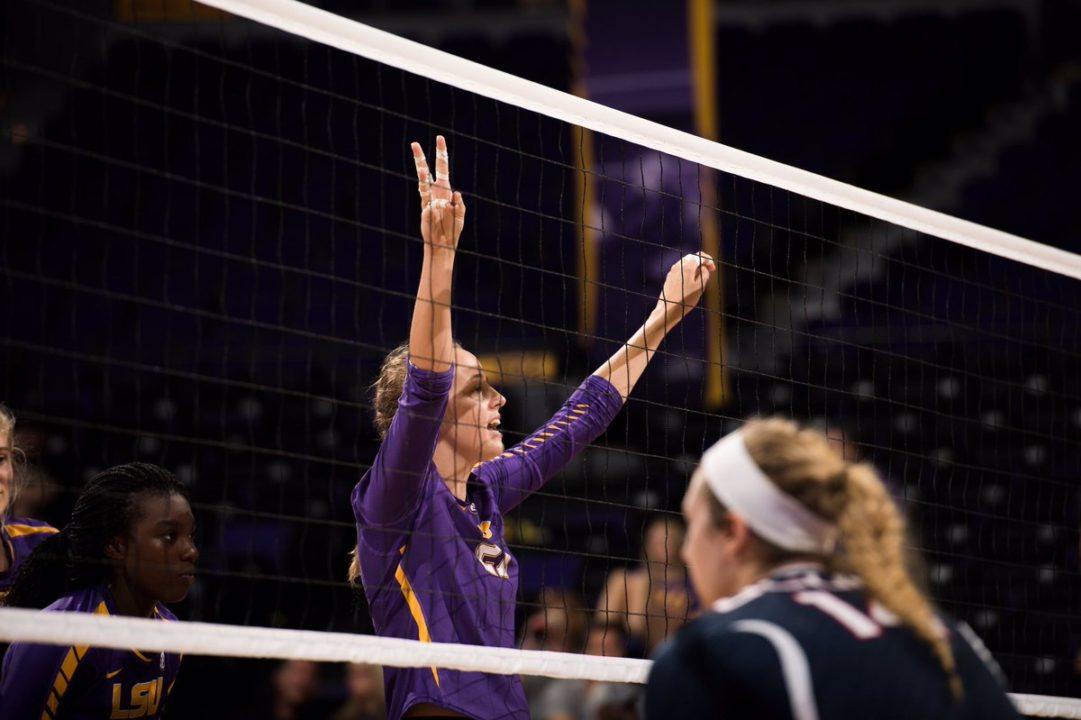 After falling in the first set of the match, the LSU volleyball team (11-3, 2-1 SEC) took the next three sets to defeat South Carolina (8-6, 1-1 SEC) Friday night in the Carolina Volleyball Center. Current Photo via LSU Volleyball Twitter

After falling in the first set of the match, the LSU volleyball team (11-3, 2-1 SEC) took the next three sets to defeat South Carolina (8-6, 1-1 SEC) Friday night in the Carolina Volleyball Center.

The Tigers claimed the victory over the Gamecocks by scores of 15-25, 25-17, 25-15 and 25-20. LSU was led by freshman Taylor Bannister with 13 kills, but sophomore Jacqui Armer stepped up with 11 kills and hit . Anna Zwiebel finished with 40 assists, while Raigen Cianciulli and Gina Tillis registered 12 and 10 digs, respectively.

Fran’s Final Thoughts
“You have to credit South Carolina with its start and it backed us out of our game plan. This has been the trend of this team. We are going to follow the opponent for a little bit. This was a great environment for a volleyball match. It was loud. We couldn’t hardly hear each other. I don’t know that I have been more proud of a team to bounce back after that type of adversity. Putting Jacqui (Armer) in the lineup made a huge difference. I thought Anna (Zwiebel) managed the match very well. We became more balanced and that created a whole lot more for us. I am super proud of our serving, our ball control and special individual performances.”

Opening Set
The Tigers struggled to get in a rhythm in the first set as they hit .176 to South Carolina’s .441. They tallied nine kills on 34 attacks with Taylor Bannister and Olivia Beyer leading with three. South Carolina scored the first four points of the game and pushed to a 10-2 lead before the Tigers took a timeout. The Gamecocks extended their lead to 19-6 and took the set 25-15.

Second Set
The offense picked up for the Tigers in the second set and they took advantage of South Carolina’s attacking errors, taking a 7-3 lead. That lead extended to 16-10 after a 6-2 run, including two aces from Toni Rodriguez. The Gamecocks scored three straight points to come within five, 22-17 but the Tigers took a timeout, regrouped and finished off the set with three straight points to even the match up 1-1. The Tigers finished the set hitting .435 with 12 kills on 23 attacks.

Third Set
The two teams traded points in the third set. The Tigers took a 13-10 lead and used back-to-back kills from Jaqui Armer and Gina Tillis to take a 15-11 lead. Armer’s seventh kill on the night gave the Tigers a 19-15 lead and forced South Carolina to a timeout. The Tigers finished off the set with seven straight points to take a 2-1 lead over the Gamecocks.

Fourth Set
It was another tight set to start as the teams were tied up 8-8. South Carolina scored four straight points to take a 12-8 lead, but the Tigers fought back and came within one after a Tillis kill, 15-14. A 7-0 run gave the Tigers a 22-18 lead and they secured the victory with two straight points, a kill from Bannister and an attack error by the Gamecocks.

Next Up
LSU road trip continues as the Tigers travel to No. 1 ranked Florida on Sunday, October 1 at 2 p.m. CT. The match will be available live on SEC Network and at WatchESPN.com.

South Carolina fell into bad habits Friday night in its SEC home opener, costing the Gamecocks (8-6, 1-1 SEC) in a 3-1 loss to LSU (11-3, 2-1 SEC). Alicia Starr and Mikayla Shields paced the offense with 10 kills each, and Aubrey Ezell added 20 digs.

SET 1: The team played perhaps its crispest game of volleyball all season to open the match, and breezed to a 25-15 win. South Carolina led wire-to-wire, leading by as much as 13 points while out-hitting the Tigers .441 to .176. Starr led the team with four kills, Abreia Epps added three more from the outside and setter Courtney Koehler was successful on three of her attacks in the front row.

SET 4: Another run from LSU in the fourth set stole away Carolina’s bid to force a fifth game. The Gamecocks held a slight lead led throughout the early going, and were the first to 15. Tough service from LSU setter Anna Zwiebel late would be the back-breaker, as she keyed a 7-0 run that turned an 18-15 advantage for South Carolina into a dangerous late deficit for the Gamecocks. The would not be able to recover, and fell 25-20 to end the match. The Tigers hit .438 with 17 kills in the fourth.

LSU’s .310 hitting percentage Friday night was the highest by a Gamecock opponent this season. After hitting just .176 in the first set, the Tigers hit .367 for the rest of the match to get the win.

Next up will be a Sunday matinee with Tennessee. The Volunteers (8-4, 1-2 SEC) lost at Florida Friday night. The 1 p.m. first serve will air on the SEC Network, and will be the team’s annual Dig Pink match. Fans wearing pink will receive $1 admission.