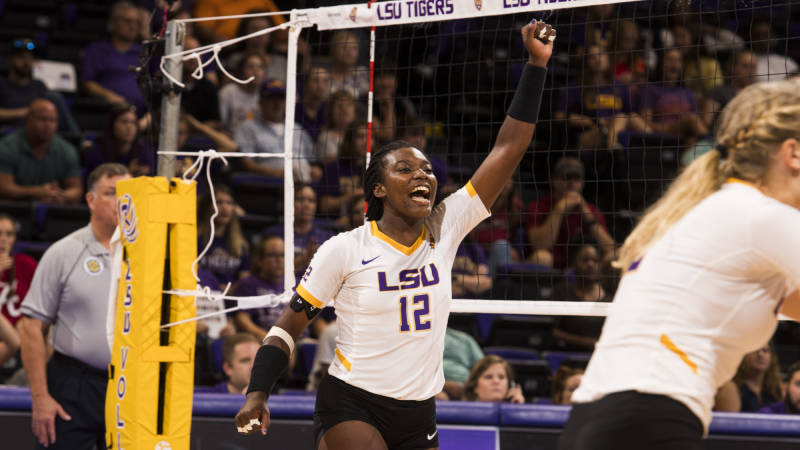 The LSU Tigers battled it out against Ole Miss for a thrilling five-set win that marks one of the longest matches for the Tigers since 2000. Current Photo via Chris Parent

The LSU Tigers battled it out against Ole Miss for a thrilling five-set win that marks one of the longest matches for the Tigers since 2000.

The fourth saw the Tigers take a 5-4 lead early but the Rebels put together a 10-4 run to go up 14-9. Ole Miss continued to build on this lead to 19-12 but LSU was resilient and fought their way back into the match. The Tigers went on a 10-4 run of their own late to take the 25-24 set lead, needing one point to end things. Ole Miss came out swinging and took the fourth in extra points 30-28.

Down to the fifth and deciding set of the match, Ole Miss came out with the early 6-4 lead over the Tigers but LSU battled back with a 5-2 run to take the 8-7 lead. From there the Rebels jumped out to a 14-12 lead but the Tigers held off the match points to tie things up at 14 all. LSU fought through extra points late in the fifth to take the match 19-17.

Tillis, Cianciulli, Quinn and Flory’s double-digit dig performances records the second straight match for the Tigers where four players accomplished the feat. Additionally, LSU’s 79 kills is the most in a match since the team recorded 80 in a four-set win over Ole Miss on October 11, 2013.

With 15 kills, Gina Tillis is now a part of the 1️⃣0️⃣0️⃣0️⃣ Kill Club! Congrats, @TillisDaRealest, who also had a career-high 23 digs! pic.twitter.com/sSsiWM4p67

For the Rebels, three players recorded double-doubles – Lexi Thompson with 19 kills and 12 digs, Kate Gibson with 18 kills and 17 digs and Emily Stroup with 15 kills and 21 digs. Nayo Warnell was close on the double-double feat with nine kills and eight blocks while Caroline Adams picked up 16 digs.

The Tigers were led by freshman Taylor Bannister, who finished the match with 21 kills, her fourth 20-kill match. Senior Gina Tillis, who recorded her 1,000 kill in her career Wednesday night, finished with 15 kills and a career-high 23 digs, her eighth double-double on the year.  Freshman Raigen Cianciulli chipped in 21 digs while Olivia Beyer and Toni Rodriguez each had 10 kills.

Fran’s Final Thoughts
On the win tonight …
“This team continues to be resilient. Tonight we got in the most dangerous situation we possibly could have and we really backed ourselves in to a corner. You have to credit Ole Miss. We knew they were the best defensive team. We knew they were going to keep the ball off the floor, but their offense was really good today. They matched us swing-for-swing after the first set. We had 23 kills in the first set. That is ridiculous. That doesn’t happen. They made us play as clean as we possibly could. It was a gritty performance for our team. Our backs were against the wall. Credit our team for being resilient and handling that adversity and bouncing back when we did not get what we wanted.”

On the crowd tonight …
“I can’t credit them enough. I know they came for cupcakes, but they also came for volleyball. This place is turning into a volleyball arena. This school and this program, we have been close before but we are about to take off. The people that are coming out, the students, the community, they are making a huge difference for us and I can’t say enough about the environment. The other SEC coaches are talking about it. This is a game changer for us and these are the matches that it makes a difference and you have to credit them with the win too.”

On her final thoughts on the win …
“We are really tired. We had a bunch of matches stacked up back-to-back-to-back. We have to rest to get better. Thankfully fall break is here and we will actually get some time off. So we will rest and recover. I am super proud of the performance of these kids. They were not going to be denied and they weren’t.”

Opening Set
LSU and Ole Miss traded points to start the match. Ole Miss went on a 3-0 run to take a 13-10 lead and pushed to a 15-12 lead heading into the media timeout. LSU worked its way back to take a 17-16 lead. The Tigers and the Rebels traded points before LSU went on a 5-0 run to finish out the set and take a 1-0 lead over the Rebels. The Tigers finished the first set with 23 kills and a .463 hitting percentage.

Set Three
Ole miss got out to a 7-3 lead over the Tigers. LSU was down 10-5 to Ole Miss but went on a 5-0 run to tie up the set 10-10. Ole Miss took a 21-17 advantage but LSU fought back, scoring seven straight points to take a 24-21 lead. Ole Miss scored two straight points, but a Taylor Bannister kill sealed the third set for the Tigers and gave them a 2-1 match lead.

Game Notes
>> The Tigers finished with 79 kills on the match, the most kills in a match since the Tigers recorded 80 on October 11, 2013 in a four-set win over Ole Miss.

>> This was the second straight match that the Tigers finished with at least four players in double-digits digs; Tillis (23), Cianciulli (21), Kelly Quin (13), Lindsay Flory(10).

>> Gina Tillis became a member of the 1,000 Kill Club. She is the 22nd Tiger in program history to reach the feat.

Next Up
The Tigers will have the weekend off and will return to action Friday, October 27 to take on nationally ranked Kentucky in the Maravich Center at 7 p.m. The match will be available on SEC Network+.

Volleyball Social Center For all of the latest news and information on Tiger volleyball, visit www.lsusports.net/volleyball. Fans can also follow the program on its social media outlets at www.Facebook.com/lsuvolleyball along with @lsuvolleyball and @lsucoachfran on Twitter and @lsuvolleyball on Instagram.

In a marathon match that lasted three hours, the Ole Miss volleyball saved match points in the fourth set and then had match points in the fifth set, but in the end, LSU came away with the 3-2 win at the Pete Maravich Assembly Center on Wednesday in front of a nationally-televised audience.

Trailing 2-1 overall, the Rebels finished off an exciting end to set four, saving match points to extend the match to a fifth set. LSU won the first three points of the fifth set and the Rebels called timeout. After that, they went on a 5-0 run to go up 5-3. A back and forth affair ensued, and the Rebels had three match points at 14-12 and then again at 15-14. LSU won two straight points for their fourth match point at 16-15, but the Rebels saved it. The two teams traded points for 17-17, but then a service error handed LSU their fifth match point and they were able to convert for 19-17 and the 3-2 win.

Looking to extend the match, the Rebels jumped out to a 17-10 lead and had three set points at 24-21, but LSU went on a big to run to grab their first match point at 25-24. Ole Miss ended up saving two more match points and then grabbed their fourth set point 28-27, on a kill from Kate Gibson. LSU saved it again but then two straight errors allowed the Rebels to take the set 30-28 and force the fifth set.

Up next…
The Rebels continue on the road with a match at Texas A&M on Sunday. First serve is set for 3:30 p.m. on SEC Network +.