MAC Tabs Players from 5 Schools as Players of the Week 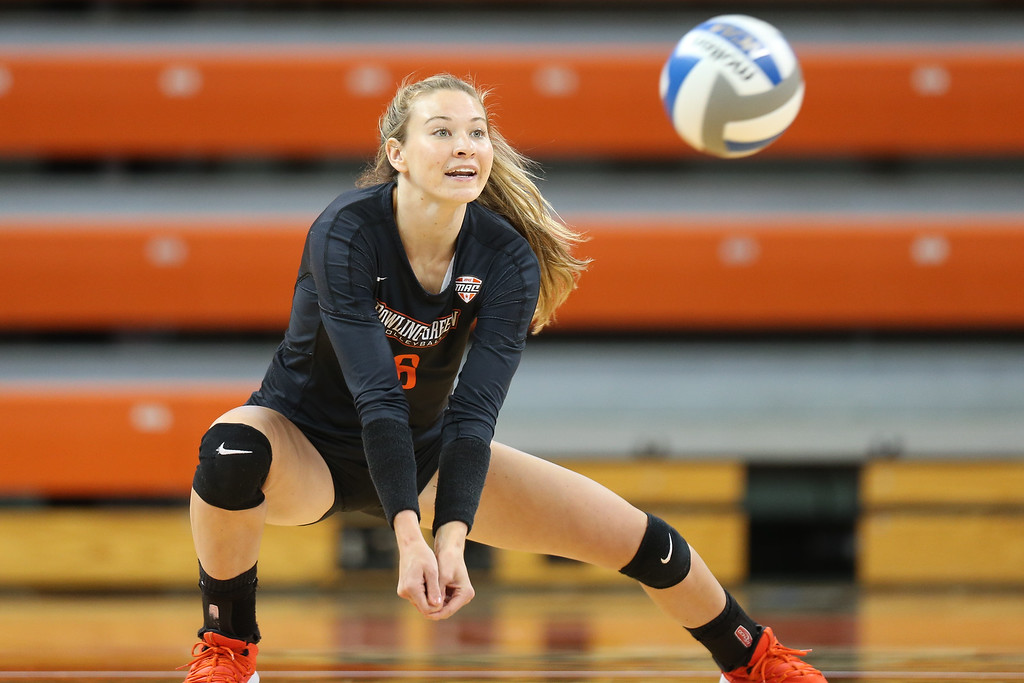 Two players from Buffalo as well as one each from Northern Illinois, Bowling Green, Eastern Michigan and Ball State were honored by the MAC for their Week 6 efforts.  Current Photo via Bowling Green Athletics

Andrea Mitrovic, Buffalo, Outside Hitter
Sophomore – Mississauga, Ontario/Silverthorne Academy
Sophomore Andrea Mitrovic was dominant this weekend as the Bulls picked up a pair of road victories.  On Sunday, Mitrovic set a new school record for kills in a match as she had 34 kills in the 3-2 win at Kent State.  The 34 kills broke a 23-year old school record set back in 1995.  She also added 16 digs and four blocks in the victory over the Golden Flashes. It was the second time in as many matches that Mitrovic had set a career high for kills as she had 25 in Buffalo’s 3-2 win at Ohio on Friday night, which was UB’s first ever win at the Convocation Center.  For the weekend, Mitrovic averaged 5.9 kills per set and 6.55 points per set.  For the year, she is averaging just over 4.3 kills per set.

Cassie Haut, Eastern Michigan, Middle Blocker
R-Junior – Monroe, Michigan/St. Mary Catholic Central
Redshirt junior Cassie Haut was a shining light on offense through the entirety of the weekend, finishing with 23 kills while hitting .500 overall. The Monroe, Mich. native’s 14 kills against Toledo marked the ninth time on the season she had finished with double-digit kills, and the fourth time she’s done so while committing one or fewer error.

Another week, another @MACSports Player of the Week!

Kallie Seimet, Bowling Green, Libero
Senior – Oregon, Ohio/Clay
Bowling Green’s loss to Western Michigan cannot overshadow the milestones reached by Kallie Seimet in the Falcons’ pair of matchups over the weekend. Against Miami and Western Michigan, the Libero from Oregon, Ohio totaled 69 digs bringing her weekend average in digs per set to an impressive 8.62, and that’s only the tip of the iceberg. Seimet reached a season high of 37 digs against the Miami RedHawks, which put Kallie at a total 1,973 career digs as a BGSU Falcon. Kallie reached the 2,000 career digs milestone against Western Michigan; 32 digs throughout the match puts Seimet at a current total of 2,005 career digs.

Congratulations to @KallieSeimet for being named the MAC East Defensive Player of the Week after posting 8.62 digs per set over the weekend! #BGVB18 #AyZiggy #GoFalcons pic.twitter.com/sCjCuytD2D

Miranda Karlen, NIU, Libero
Sophomore – Evansville, Wisconsin/Evansville
Karlen averaged 7.57 digs per set this week as NIU split matches against Western Michigan and Miami. On Thursday, Karlen had 24 digs, four assists, and a pair of aces as the Huskies defeated the Broncos in four sets. She then had a match-high 29 digs at Miami on Sunday. Her 29 digs were just two shy of her career-high of 31 and came in only three sets. Karlen has had at least 20 digs in each of her last five matches, and in nine matches total this season.

Karlen averaged 7.57 digs per set this week as NIU split matches against Western Michigan and Miami. She has had at least 20 digs in each of her last five matches, and in nine matches total this season. #MACtion pic.twitter.com/KyiS4wMynH

Scout McLerran, Buffalo, Setter
Junior – Friendsville, Tennessee/Webb School
Junior setter Scout McLerran rejoined the starting lineup this weekend and helped guide the Bulls to a pair of road victories as she averaged 10.30 assists per set.  She began the weekend with 47 assists in the five-set win at Ohio on Friday night, UB’s first ever victory at Ohio.  She also added six kills and 14 digs against the Bobcats. On Sunday, McLerran had 56 assists in the win at Kent State, while also finishing with four kills and 12 digs. McLerran moved into sixth place on UB’s career assists list.

Amber Seaman, Ball State, Setter
Junior – Carmel, Indiana/Brebeuf
Junior setter Amber Seaman led the Ball State women’s volleyball team to a perfect 2-0 record last week by handing out 12.00 assists per set and running the offense at a .264 (93-28-246) efficiency in sweeps of Eastern Michigan and Central Michigan. Seaman, who also recorded double-doubles in each match, also hit an impressive .611 (11-0-18) on her own, while also serving up three aces. Seaman opened the week by leading the Cardinals to a .278 rate of success in a sweep of MAC West Division Co-Leader Eastern Michigan. She handed out 35 assists in the contest, while also scoring 10 digs for her second double-double of the season. On the attack, Seaman hit .600 with six kills on 10 swings with no errors. She also served up an ace and scored a pair of block assists. In Saturday’s sweep of Central Michigan, Seaman ran the offense at a .252 clip, handed out 37 assists and corralled 11 digs for her second double-double of the weekend and third of the season. She also added the match’s only two service aces, scored five kills, hit .615 and tallied a block assist.

CONGRATS @amberseaman6 … After leading the @BallStateWVB offense to a .264 attack percentage and handing out 12.00 assists per set last weekend, you have been named the @MACSports West Division Setter of the Week!!!