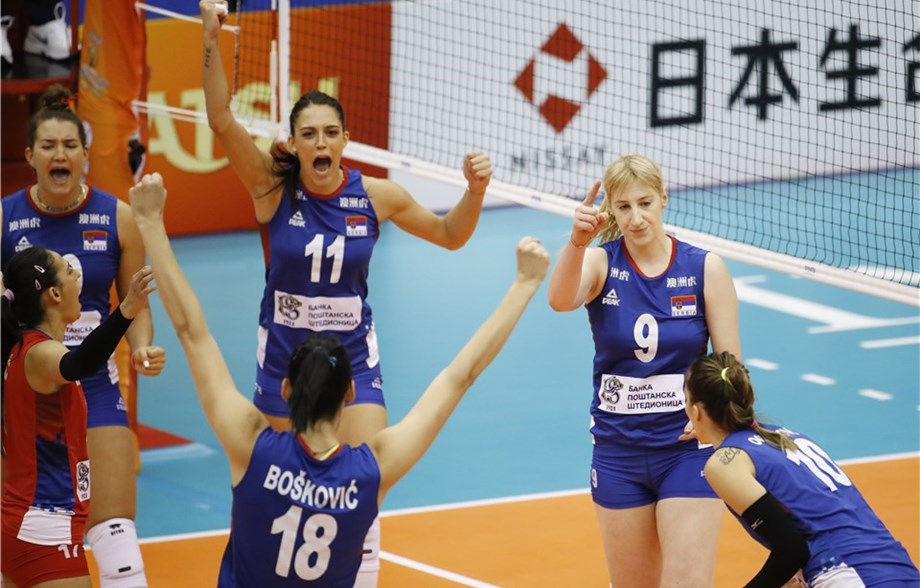 Sweeps were the result of the day at the World Championships on Day 3 with all three matches in Pool A and in Pool D ending in short order.  Current Photo via FIVB

Sweeps were the result of the day at the World Championships on Day 3 with all three matches in Pool A and in Pool D ending in short order.

The lone surprise result of the day was how quickly No. 3 Serbia bested No. 4 Brazil. In terms of rankings, No. 13 Germany topping No. 11 Argentina in Pool A also was a slight upset.

Tijana Boskovic led the way for the Serbs with 24 points on 21 kills, two aces and a block. Brankica Mihajlovic (15) and Milena Rasic (12) followed.

Serbia jumped ahead in Set 2 at 8-6 and maintained a slight edge throughout. Boskovic again drove the ship for the Serbians, coming through in the clutch whenever Brazil got close. A four-point edge at 19-15 climbed to seven at 25-18 as Mihajlovic notched her second set-ending putaway.

“This was our best game of this championship,” Serbian coach Zoran Terzic said. “We were good on attack. We made mistakes on service, but we tried our best to move the Brazil team around with our serves. We must be happy and satisfied with this victory. I think we can still play better.”

Performances of the Day

Tijana Boskovic (Serbia) was a game-changer for Serbia, racking up a match-high 24 points on 21 kills, two aces and a block in the crushing win over Brazil.

German head coach Felix Koslowski: “Argentina deserve to be here because they play at a high level. We expected them to play with great fighting spirit and great technique and tactics and to put us under a lot of pressure. Even when we led by three or four points we never felt safe and had to push, push, push. My players did a really excellent job.”

The Netherlands stayed perfect atop the group at 3-0, while Japan and Germany each earned their second win. The pool has a day off ahead of the final two days of action on Wednesday and Thursday.

In one of the most anticipated matches of the group, #3 Serbia edged #4 Brazil in straight sets to take the top spot in the group at 3-0 with a full nine points. All nine matches in Pool D have been decided in straight sets.

Both pools have the day off before returning to action on Oct. 3. Pools B and D are in action on Tuesday with three matches apiece.