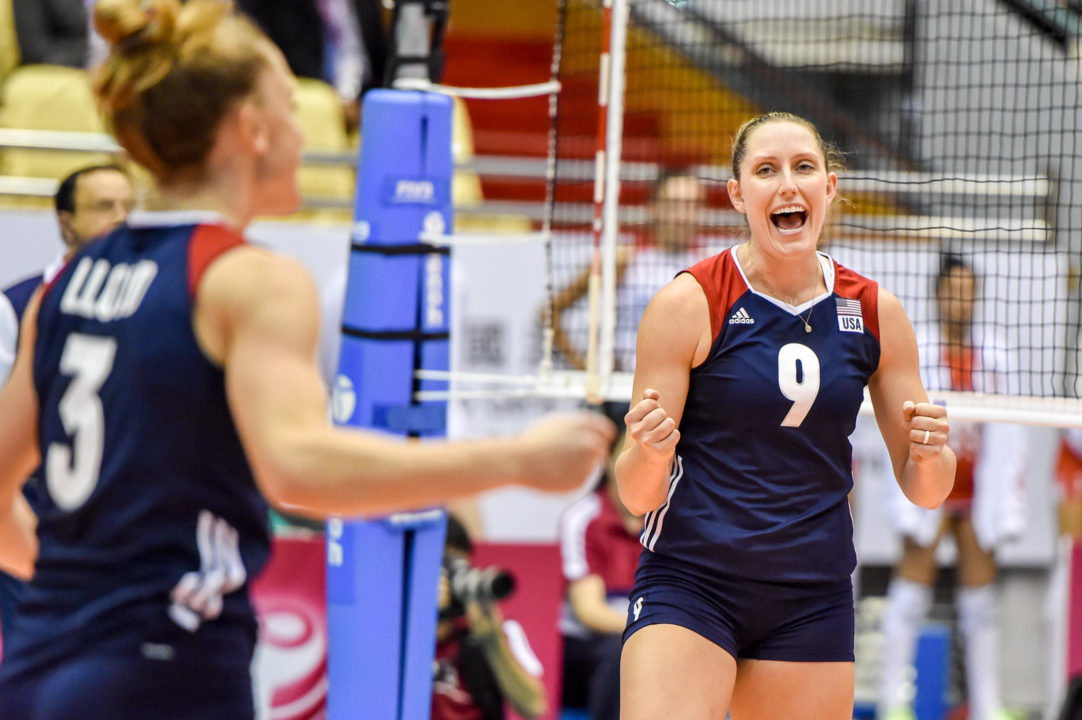 Kingdom closed out the Americans' exhibition tour in Brazil with a big game - both offensively and defensively. Archive Photo via FIVB

25-year old outside hitter Madi Kingdon started her third-straight match after not seeing the court in the opener, and she exploded on Saturday for a 23-point outing. Besides a block and 2 aces, that included a team-high 20 kills on a team-high 41 swings for 49% hitting, with just 4 errors (a low number given the amount of attempts she took).

Kingdon’s performance improved in every match she played last week:

It wasn’t just her hitting that was top-notch on Saturday either. After consistent, but not spectacular, reception performances in her first two games, Kingdon had 38% excellent and 76% positive reception on 21 events in Saturday’s finale.

Kingdon didn’t play in the Volleyball Nations League for the Americans, in spite of ranking 2nd on Team USA in scoring at last year’s Grand Prix.

Chiaka Ogbogu also got her second chance of the series in the middle, and turned in another sterling defensive performance. After 4 blocks in game 2, Ogbogu chipped in another 6 in game 4 for 10 total across 7 sets played. Along with Tori Dixon’s help, the Americans out-blocked Brazil 12-6 (in spite of 4 for Brazilian middle Ana Beatriz).

Ogbogu’s offensive performance improved in her 2nd round of action as well. She had 5 kills on 7 swings with no shots blocked and no errors. That’s in lieu of just a 5-for-14 performance in her first showing. Her service errors are still high though – with 3 in game 2 and 2 more in game 4, without any aces.

After the (relatively) Americans stifled Brazilian offensive juggernaut Tandara Caixeta in the first 3 games of the series, Brazil shifted the offensive load to outside hitter Gabi Guimaraes (Gabizhina) on Saturday. The Americans shifted, though, and still held Braizl to just 35% hitting in the match – blocking 2 of Tandara’s shots and 4 of Gabizhina’s. The Americans didn’t have the same answer for Gabizhina’s serve, however; she had 3 aces and no service errors. Gabizhina finished with 17 points in total and Tandara with 11.

Middle blocker Thaisa Daher, who is returning to Brazil’s National Team after a long stretch of rehabbing an injury, had 5 kills on 10 swings, a block, and an ace for Brazil.

Annie Drews contributed 19 points to the American effort from the opposite position, with 16/31 hitting, 2 aces, and a block.

“I thought it was a difficult game,” Drews said. “It was very point-to-point. The lead changed many times. Every time we play Brazil, I think we learn so much about ourselves and our weakness and ways we can get better. They really challenge us. We really commend them and thank them for this last week and getting both teams better. It has been a lot fun.”

More than the wins, Drews says the experience was key for the U.S. team, who won the 2018 Volleyball Nations League title.

“I think the bigger focus was getting people playing time who may not have played much during Volleyball Nations League, getting some of our younger players comfortable,” Drews said. “I think four matches gave us a good chance to do that. Get a lot of people playing time, and see what we need to get better at.”