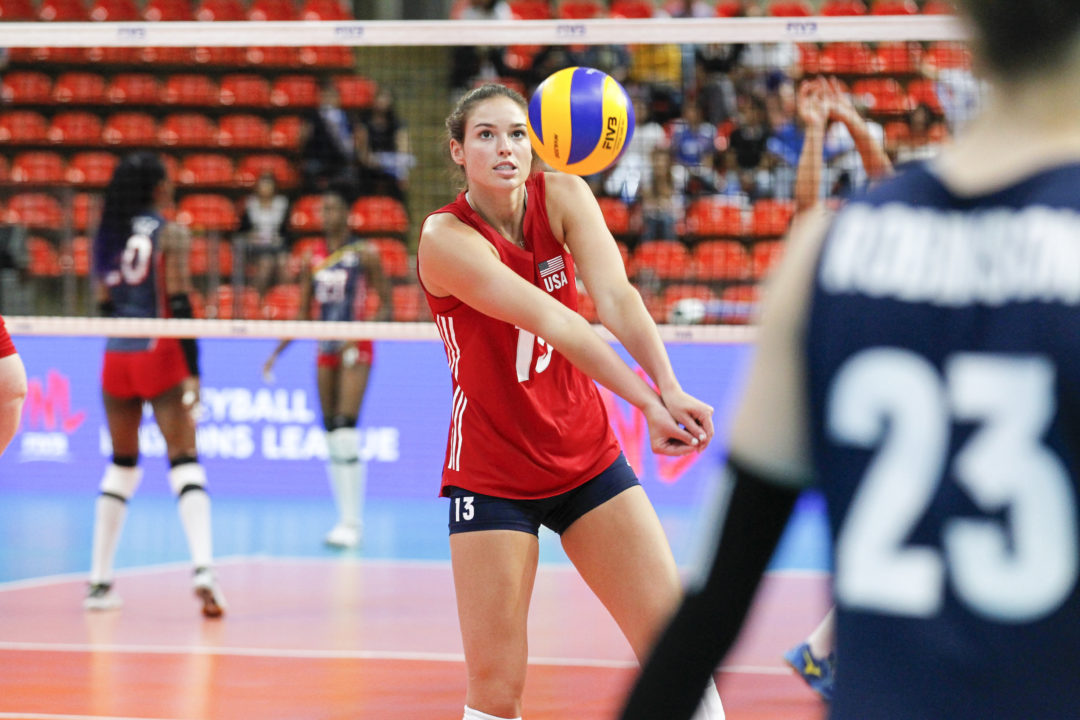 Sarah Wilhite (above), Rachael Adams, and Lauren Gibbemeyer each had 3 stuffs as the USA defense held Brazilian star Tandara Caixeta in check on Sunday in Brasilia. Archive Photo via FIVB

The U.S., playing with about half of their “A” lineup, thoroughly dominated the Brazilians in the match, save for a 3rd-set loss in extra points.

The match marked the return of Karsta Lowe, who returned to the U.S. National Team roster for the first time since the 2016 Olympic Games. Lowe retired shortly after those Olympics, and earlier this summer, at still only 25-years old, returned to training with the National Team. She wasn’t on the American roster for the Pan American Games, as many expected she would be for her return to major international volleyball, but has been chosen to return with Team USA to Rio.

In her second start for Team USA since coming out of retirement (she also started against Japan in California 2 weeks ago), Lowe scored 15 points, all of which came on kills (15-30 hitting, 50%) with just 2 hitting errors. That tied her for the team lead for scoring alongside Michelle Bartsch-Hackley, who is fresh-off her Nations League MVP honor. Bartsch-Hackley had 13 kills, an ace, and a block, but hit just 13-34 (38%), below the team’s aggregate average of 48%.

The Americans’ most impressive feat, however, was defensive, where they were able to hold 29-year old Brazilian star Tandara Caixeta in check. Caixeta, who had multiple 30-point games in the Nations League, came away with 15 on Sunday: 12 kills, 1 ace, 2 blocks. The Americans blocked 5 of her shots, part of a whopping 12-6 U.S. block advantage, and forced Tandara into 6 hitting errors. That leaves her with just a .026 hitting efficiency rate in the match.

Sarah Wilhite, vying to be the American  setter of the future, was all over the court. She had 11 total points on 1 ace, 7 kills, and 3 blocks. She was one of 3 Americans with 3 blocks, alongside middle blockers Rachael Adams and Lauren Gibbemeyer. Micha Hancock also contributed 2 from the setter position.

Another American making her return to the court was Megan Courtney, an outside hitter by trade but who is occasionally used by Team USA at libero, including on Sunday. She tore her ACL while playing with Team USA last summer, and this is her first official match with the team since that injury.