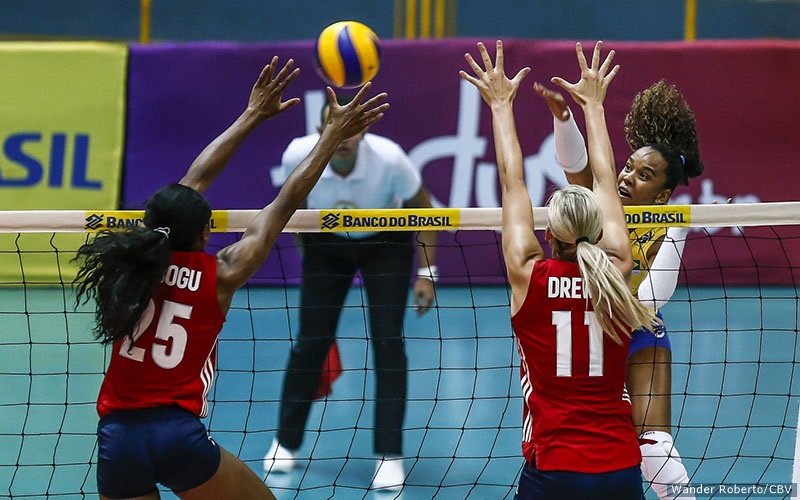 After posting a four set win on Sunday, the United States women's national team made short work of Brazil in the second of four friendlies on Tuesday. Current Photo via Roberto Wander/CBV

UBERABA, Brazil – After posting a four set win on Sunday, the United States women’s national team made short work of Brazil in the second of four friendlies on Tuesday.

Outside hitter Michelle Bartsch-Hackley led the way for the Americans with 14 points (13 kills, 1 block), while opposite Annie Drews added 11 (9 kills, 1 ace, 1 block) and middle blocker Chiaka Ogbogu tacked on nine points including a team-best five blocks.

Tandara Caixeta was the top scorer in the match with 16 points, while Amanda added 12 and Rosamaria chipped in 11 scores.

Brazil outscored the United States in kills (42-41), but the Americans held the advantage in blocks (10-7) and aces (3-2) despite using five new starters. Bartsch-Hackley and libero Megan Courtney were the lone holdovers from Sunday’s starting seven.

Brazil scored the first three points of the night, but the Americans turned things around with a 10-5 run and later boosted its lead to three at 13-10. The Brazilians called timeout and scored seven of the next 10 to go up 17-16. Another 3-0 run pushed the home lead to 21-19. A kill by Bartsch-Hackley and two stuff by Ogbogu put the U.S. on top 23-22. In the end, Drews downed two kills to secure the Americans a 29-27 win.

In Set 2, Brazil jumped ahead 6-3, but the USA answered with a 6-0 run, including two Madi Kingdon Rishel kills and two Brazilian miscues. After falling behind 19-15, the Americans crept back into a 20-all tie with a Micha Hancock ace, kills by Kindgon Rishel and Karsta Lowe and a stuff by Tori Dixon. An Ogbogu block put Team USA up 23-22 and a Bartsch-Hackley putaways and Ogbogu stuff clinched the 25-23 victory.

Set 3 belonged to the Americans throughout, beginning with a 5-0 run, including two Kingdon Rishel terminations and two Brazilian errors. The lead stood at six at 8-2 and again at 12-6, but Brazil was primed for a comeback, slicing the margin to three at 15-12. Lowe bounced two kills and Bartsch-Hackley added a third, while Carlini served up an ace to push the Americans ahead 21-15. An overpass kill by Bartsch-Hackley and another Brazilian miscue put the visitors two points from the match. Brazil wasn’t done yet, however, scoring three in a row to keep things going. Drews prevented a further comeback with two stuffs.