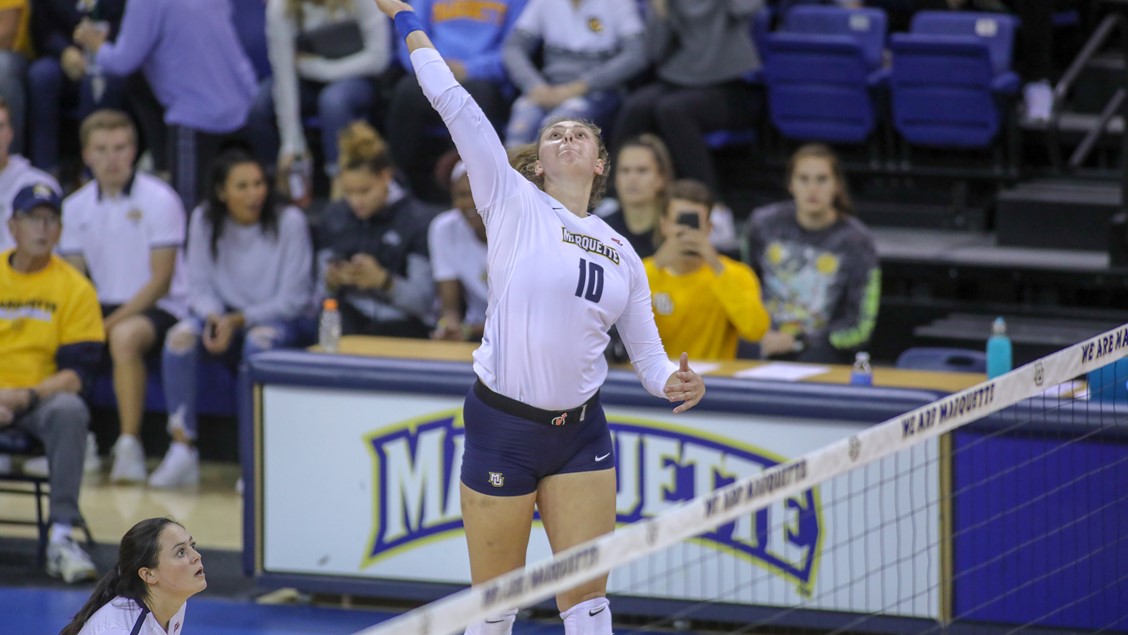 Marquette’s Allie Barber wins BIG EAST Offensive Player of the Week for the second time this season after helping the Golden Eagles take down No. 10 USC.  Current Photo via Marquette Athletics

Barber was named to the All-Tournament Team after posting a season-high 29 kills in a win against No. 10 USC, just one shy of her career best, to go along with a .473 hitting average and three blocks in a 2-1 weekend for Marquette. Against then-No. 3 BYU, she had 16 kills and a pair of blocks, despite the four-set loss. Barber averaged 4.54 kills per set against USC, BYU and Syracuse, currently leading the league in that category at 4.47. The outside hitter averaged 4.73 points and 10.14 assists over the weekend to help the No. 25 Golden Eagles improve to a 7-2 record.

MVP of the Bluejay Invitational, Winters averaged 4.54 digs and 0.23 blocks per set during a week where No. 14 Creighton (6-3) went 2-1 against a trio of national seeds from a season ago. Winters opened her week with a double-double of 18 digs and 18 kills in a five-set match against No. 7 Nebraska. Against Iowa State, Winters had a career-high 26 digs in a 3-1 victory over the Cyclones. Her 26 dig performance was also a four-set match high for the week among BIG EAST competitors. Winters closed out her week with 15 digs, three blocks and 18 kills in a 3-1 victory over Wichita State to clinch the Bluejay Invitational title. Creighton held opponents to a league-high .177 opponent hitting percentage. Along with Winters’ defensive performance, she also averaged 4.12 points and 3.92 kills.

🏆🏅🎊
Congratulations to Jaali Winters on earning this week's BIG EAST Defensive Player of the Week award!#GoJays

The rookie totaled 30 kills over the weekend, including 10 in a win over No. 21 Utah. Delaplane averaged .310 hitting against the Utes. The outside hitter also recorded 12 kills in a road win over Philly rival Temple. Throughout the Villanova Classic, she averaged .253 hitting, along with 2.58 points per set as the Wildcats moved to 7-2 overall.

Kloth averaged 5.62 points, 4.92 kills, 1.23 digs per set while hitting .312 and was named to the All-Tournament Team. Kloth had a career-high 26 kills, while hitting .400 against No. 7 Nebraska. She followed that up with 23 kills on .281 hitting in a win against Iowa State. Kloth finished with 15 kills and a career-high four aces in CU’s win over Wichita State to clinch the Bluejay Invitational title.

The sophomore defensive specialist recorded a total of 64 digs over the weekend against No. 10 USC, No. 3 BYU and Syracuse, including 27 versus the Trojans. Konovodoff, who was named to the All-Tournament Team, averaged 4.92 digs per set and 1.08 assists over the course of the three matches.

Impellizeri helped the Friars’ offense with a .434 hitting average and 4.64 points per set. The senior added 12 blocks and 4.07 kills per set with 23 coming against Southeast Missouri State to lead all players in the match. Impellizeri was named to the Kangaroo Klassic All-Tournament Team.

Sanabia posted 79 digs in four matches in a 2-2 week for the Red Storm. She now leads the BIG EAST in digs per set at 4.98 after she averaged 4.65 over the past week. With 25 digs against Tennessee State, Sanabia has now eclipsed 200 for the season.

Olsonoski averaged .312 hitting over the course of the Villanova Classic to go along with 2.08 kills per set and 2.50 points per set. She helped the Wildcats (7-2) take down No. 21 Utah with a hitting average of .412 and seven kills.