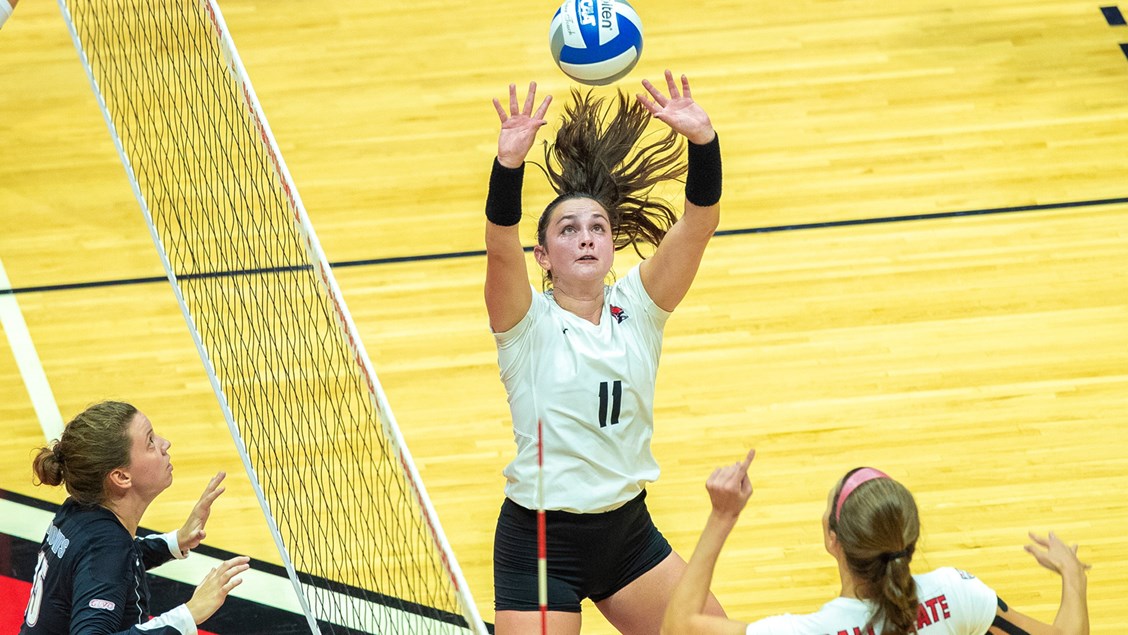 Courtesy: Mid-American Conference  The MAC introduced a setter of the week award for the 2018 season with Buffalo’s Scout McLerran... Current Photo via Ball State Athletics

The MAC introduced a setter of the week award for the 2018 season with Buffalo’s Scout McLerran and Amber Seaman being honored from the east and west divisions respectively.

East Offensive Player of the Week

Andrea Mitrovic, Buffalo, OH
Sophomore – Mississauga, Ontario/Silverthorne Institute
Sophomore Andrea Mitrovic has a pair of dominating performance this past weekend as she was named to the All-Tournament at the Blue and White Classic.  Mitrovic has back-to-back 20-kill performances, beginning with 20 kills in the win over Seton Hall where she completed the double-double with 15 digs. Mitrovic followed that performance up on Saturday against North Dakota State with 22 kills.  She hit .390 for the two matches as she had just 10 combined errors on 82 swings this weekend.

JUST IN: Week 1 Volleyball Athletes of the Week!

Mitrovic had back-to-back 20-kill performances to hit .390 for the two matches and was named to the All-Tournament at the Blue and White Classic. #MACtion pic.twitter.com/d27UvvBQOX

West Offensive Player of the Week

Ellie Dunn, Ball State, OH
Senior -Sugar Grove, Illinois/Kaneland
Senior outside hitter Ellie Dunn was named to the Dayton Invitational All-Tournament Team after leading the Ball State offense with a 3.83 kills per set average and hitting .336 over the course of opening weekend. Dunn registered double-digit kills in all three matches, starting with a season-high 17 in the win over South Alabama. She followed with 16 kills versus tournament host Dayton and added 13 in the sweep of Marshall. Her kill totals versus South Alabama and Marshall was also match-highs. Dunn was just as impressive on defense, recording a career-high 10 digs versus both South Alabama and Dayton for her first two career double-doubles. She finished the weekend with a 2.33 digs-per-set average and also led Ball State’s primary passers with a .967 (59-for-61) reception percentage. In addition, Dunn served up her first three career service aces against Dayton.

East Defensive Player of the Week

Taylor Sharrits, Akron, DB
Sophomore – Concord, Ohio/Lake Catholic
Sophomore libero Taylor Sharrits was named to the Fullerton/Riverside Classic All-Tournament team after averaging a team-best 6.07 digs per set, 85 digs. Sharrits led the back-row defense in all three matches, including a career-high 32 digs to help Akron to a 3-2 victory over Cal State Fullerton in the season opener.

West Defensive Player of the Week

Maurissa Leonard, Toledo, L
Senior – Oregon, Ohio/Sr. Ursula
Averaged 6.67 digs per set over the weekend…Tallied 31 digs in the season opener against Northern Kentucky, 22 against Notre Dame, and 27 against Weber State…Averaged 9.33 digs/set in sets won over the weekend…Just three reception errors in 68 attempts…Now just 16 digs away from becoming Toledo’s all-time career leader in digs.

East Setter of the Week

Scout McLerran, Buffalo, Setter
Junior – Friendsville, Tennessee/Webb School
Junior setter Scout McLerran led the Bulls to a 3-0 record this weekend as she played all 11 sets as the team’s primary setter.  McLerran averaged 12.18 assists per set in the perfect week for the Bulls.  It began on Friday morning against Niagara when she had 43 assists in a three-set win over the Purple Eagles.  She added 47 assists in the victory against Big East foe Seton Hall and she finished the weekend with 44 assists against North Dakota State.  Offensively, McLerran also hit .600 in two of the three matches for the Bulls as she finished with just one hitting error.  McLerran completed the weekend with 18 total digs, including nine against Niagara.

And a big shout out to junior @ScoutMcLerran on being named the first ever @MACSports East Setter of the Week #UBhornsUP pic.twitter.com/QYQ3lW8wBK

West Setter of the Week

Amber Seaman, Ball State, Setter
Junior – Carmel, Indiana/Brebeuf
Junior setter Amber Seaman earned Dayton Invitational All-Tournament Team honors after leading the Ball State offense to a .231 attack percentage over the weekend, dishing out 117 assists for a 9.75 assists-per-set average … Ball State hit a season-best .385 (48-11-96) in the victory over Marshall, marking the team’s best attack percentage in a match since a .396 (45-7-96) effort in a sweep of Buffalo on Sept. 30, 2017 … Seaman also led all Ball State players with five aces over the weekend, while logging five total blocks and registering 20 digs.