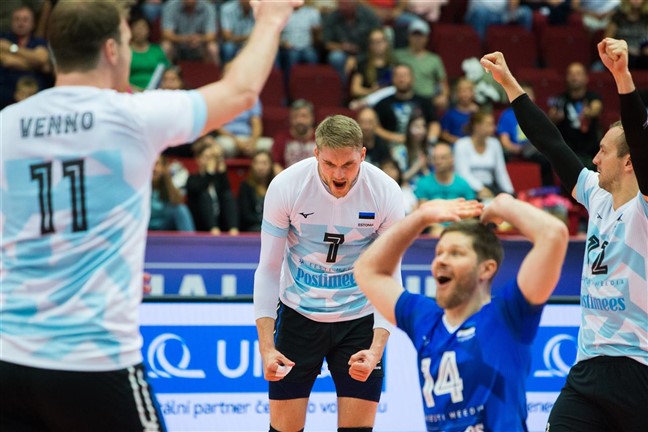 Estonia took down Czech for Gold while Turkey earned bronze from Portugal on the final day of the Golden League of the European Volleyball League. Archive Photo via CEV

Pool play finished up today in the 2018 Men’s European Volleyball League, leaving us with just the Final Four to play. The Silver League awaits action on Friday, but the Golden League is underway with the semifinals now in the books with the winners earning a bid to the Men’s Challenger Cup with Portugal, who gets to host the event.

Both of these nations already clinched a spot in the 2018 FIVB Volleyball Challenger Cup by making it to this point, with this match just serving as the cherry on top. That produced a gold medal for Estonia, while Czech Republic will go home with a silver following the three-set match as now it’s less than a week turnaround to the next event.

Neither team found much success in the serve and the blocks were close to even with a three-kill lead for Estonia (43-40). The biggest team stat that stood out in favor of a Estonia sweep was just 13 team errors for the winning team compared to 22 for the Czech side.

Individually, Michal Finger (18 points) and Donovan Dzavoronok (12 points) were two of three in double-digits for Czech Republic, but were outdone by the trio of Oliver Venno (14 points), Renee Teppan (13 points) and Timo Tammemaa (12 points). Those three were a key component to Estonia having a 57% attack execution compared to 47% from Czech Republic.

Turkey was able to fend off Portugal for the bronze and a third-place finish at the European Volleyball League. The win won’t give the Turkish side any advancements and a chance at the Volleyball Nations League, but it’s a strong finish to the event as they look to use the positives as a springboard for 2019.

Portugal was actually the better blocking team (14-11) and only had one less kill, but the battle of the serve proved the difference. Turkey not only notched three more aces (5-2), but had 11 less serve errors (9-20). That 14 point swing was the difference in a match where Turkey outscored Portugal 108-91.

Spearheading the effort for the Turkish side was Metin Toy, who led the match with 24 points. Only one other player for the nation had double-digit points, although seven players had three or more points outside of Toy with four at seven or more points. For Portugal, they did have a dynamic duo of Marco Evan Ferreira (20 points) and Alexandre Ferreira (17 points), but no other player had more than seven.