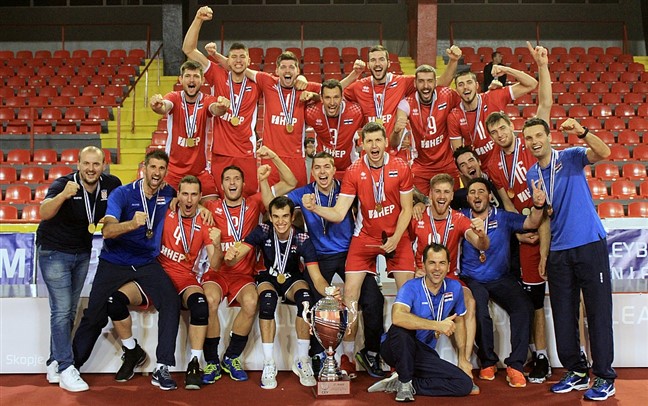 Croatia downed Belarus in the Finals while Latvia defeated Macedonia in the Bronze medal match on the final day of the European Volleyball League. Archive Photo via CEV

Pool play finished up today in the 2018 Men’s European Volleyball League, leaving us with just the Final Four to play. The Golden League has also come to a close, with Estonia taking down Czech Republic in the final and both teams qualifying for the Men’s Challenger Cup. The Silver League doesn’t provide that opportunity, but does give one for relegation to the Golden League next year as the tournament finished up today.

The Croatian side’s chances of winning gold looked bleak in the semifinals, as they trailed 0-2 to Macedonia. From there on, they won six of their next seven sets of action to not just overcome the hole but take out Belarus for first place and the gold medal while the losing side earned silver.

Croatia was all about risk-reward from the serve line, and had 21 serve errors but 11 aces. That aggressiveness kept Belarus out of system at times too, contributing to a four set win with a narrow final two games. In total, just one player for Belarus logged double digit points in Andrei Radziuk (12 points) compared to four for the Croatians, led by outbursts from Leo Andric (29 points) and Danijel Galic (20 points).

These two teams had different paths to losses in the semifinals, but it was similar heartbreak. For Latvia, they were undefeated before suffering a defeat in the round. Macedonia on the other hand was 2-4, but held a 2-0 lead at home and could not hold it. In a chance for redemption and Bronze medals, Latvia came out on top in a thrilling four-set finish.

At the end of the day, the serve may have been the difference – as it was in the championship match. Latvia recorded seven more aces (9-2) on two less serve errors (16-18) and slowed the Macedonia attack. Aleksander Ljaftov (20 points) wasn’t effected much, but no other player for the home nation had more than seven points. Switch to Latvia, where a quarter logged over 13 points, led by Romans Sauss (15 points).