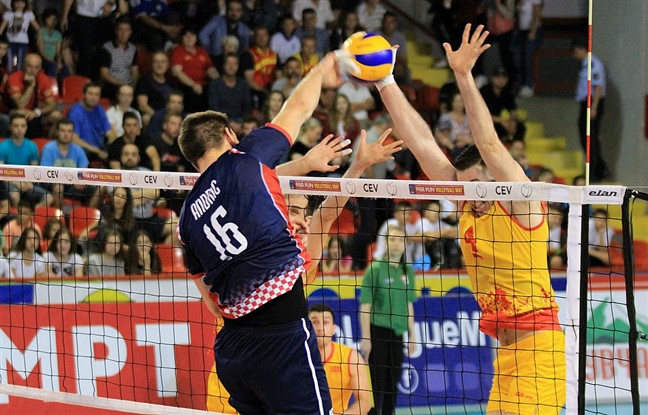 Croatia mounted a comeback from an 0-2 hole to down Macedonia and meet Belarus in the Silver League Gold medal match. Archive Photo via CEV

Pool play finished up today in the 2018 Men’s European Volleyball League, leaving us with just the Final Four to play. The Golden League has also come to a close, with Estonia taking down Czech Republic in the final and both teams qualifying for the Men’s Challenger Cup. The Silver League doesn’t provide that opportunity, but does give one for relegation to the Golden League next year as the tournament finishes up in the next two days.

For the first time in this tournament, Latvia dropped a match. It came at the worst possible time in the semifinals, as Belarus will sport their strong 6-1 record now in the Gold medal match for the Silver League. Belarus looks to be a force too, after not just handing Latvia their first loss, but doing so in three sets by a final score of 75-55.

The block (14-4) heavily favored Belarus on the day and discouraged the Latvian attack. Just one player for the losing side reached more than seven points in Romans Sauss (11 points) due to that block, while five players notched eight or more points for Belarus. That was led by Andrei Radziuk (13 points).

Macedonia had the home crowd riled up and ready to push them into the finals of the Silver League, but fell apart as Croatia came storming back to overcome the 0-2 deficit in a five-set victory. The win pushes Croatia to the championship against Belarus, while Macedonia will host Latvia for the bronze.

Croatia found it difficult in getting their serve in play, but found more success at the end with their aggressiveness paying off. They also slightly won the battle of the block (9-6) and executed five more kills (56-51) on a more efficient mark.

Leading the charge for Croatia in the comeback was Leo Andric (28 points), who had a secondary option in Danijel Galic (14 points) show out as well. Macedonia had a dynamic duo also in Nikola Gjorgiev (27 points) and Aleksander Ljaftov (16 points), but the ‘others’ for Croatia outscored Macedonia 29-18.