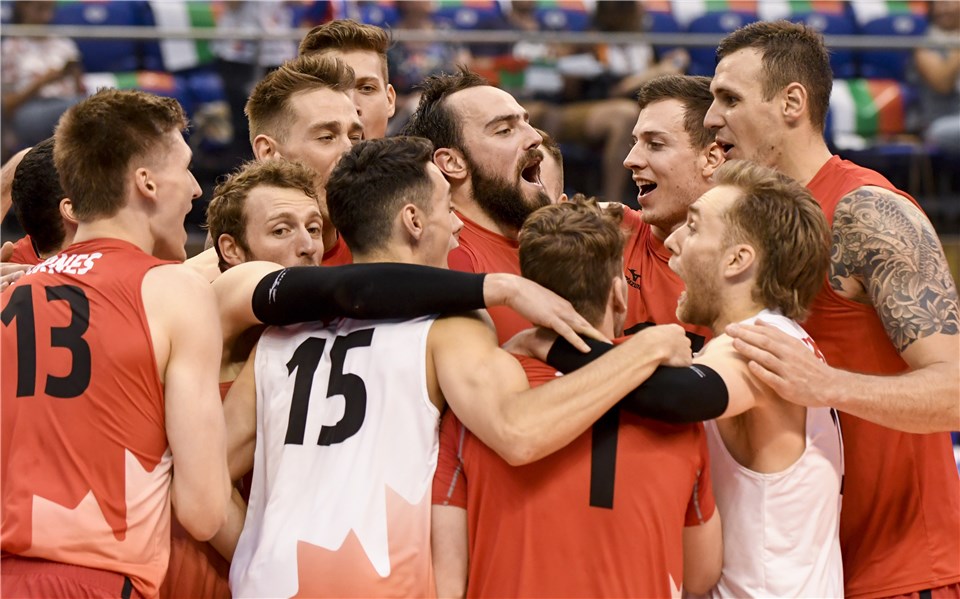 Gavin Schmitt and Nicholas Hoag carried Canada to a shocking sweep of a Brazil, ending a two-match losing skid, meanwhile France was better than Bulgaria in every way in a sweep for its fourth straight VNL win.  Current Photo via FIVB

Gavin Schmitt and Nicholas Hoag carried Canada to a shocking sweep of a Brazil, ending a two-match losing skid.

Schmitt downed a match-high 16 kills, while Hoag tacked on 12 putaways, a team-best two aces and a block. Stephen Maar and Graham Vigrass followed with nine and eight points respectively. Maar notched nine kills, while Vigrass chipped in five putaways, a team-high two blocks and an ace. Bradley Gunter played in just one set, while Jason Derocco took just three swings in two sets as a substitute.

Wallace DeSouza scored a match-high 19 points with 16 kills, two blocks and an ace. Lucas Saatkamp (12), Mauricio Silva (10) and Isac Santos (9) rounded out the offense. Saatkamp and Silva managed 10 putaways apiece, while Saatkamp was one of three players with two blocks to his credit. Santos was the third in that group and also chipped in five kills and a team-best two aces.

After splitting points over the first half of Set 1, Hoag lifted Canada to a 22-19 advantage with a strong service run. Brazil knotted it up at 22, but a Schmitt putaway and two more points gave the Canadians the 25-22 win.

Brazil cruised to a 14-8 lead in Set 2, but Canada countered and sent the set to extra points. Wallace kept Brazil in it, while Saatkamp came through for Canada, thwarting Brazil’s fifth set-point try. Both teams registered a service error down the stretch and Canada finally claimed victory on its eighth attempt at the set as Wallace stumbled.

Brazil shook off the defeat and claimed a 10-6 lead in Set 2. The Canadians pulled level at 14, but were down two at 16-14 at the second technical timeout. The teams traded points over the next several serves, before Maar put Canada up 24-23. Tyler Sanders came through with an ace, his lone point of the match, to cap the unlikely sweep.

France was better than Bulgaria in every way in a sweep for its fourth straight VNL win.

Valentin Bratoev led a group of four players with eight points or more. Bratoev notched nine points with seven kills and two aces. Svetoslav Gotsev, Rozalin Penchev and Nikolay Uchikov tacked on eight points apiece. Penchev and Uchikov turned in seen kills and a block each, while Gotsev starred at the net with four blocks, three kills and an ace. Bulgaria used 12 of its 14 players in the match.

The contest did not start well for Bulgaria, which lost 28-year old outside hitter to a calf injury on the first point. France added insult to injury, going up 9-5, but let the Bulgarian back in with a 5-1 run. The French took a timeout where coach Laurent Tillie rallied his troops to a 22-18 advantage en route to a 25-21 win.

France built a 16-13 lead by the midway point in Set 2 as Chinenyeze and Patry paced the team at the net. From there, the French stayed one step ahead in a 25-20 victory.

Bulgaria hung tight against all odds in Set 3, eventually tying the score at 15 on a Bratoev putaway. Boyan Yordanov kept the Bulgarians in it down the stretch, knotting things up again at 19. In the end, a Bulgarian service error gave France its first match-point try, which the team instantly cashed in on with a Patry kill.