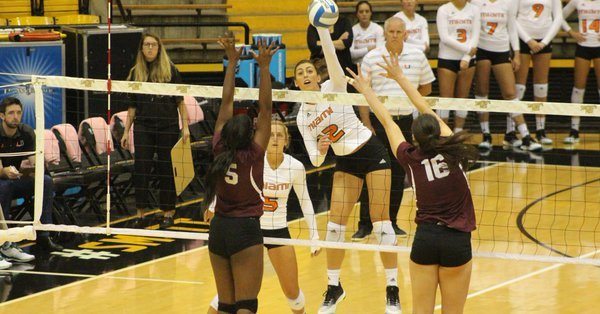 Strantzali tallied three 20-kill efforts, averaging 5.33 kills per set while hitting at a .306 clip. The Pylaia, Greece, native chalked up 22 kills and two aces against Arkansas-Little Rock. She followed that with 22 kills, nine digs and four aces against Southern Miss and rounded out the weekend with 20 kills, eight digs and a .486 hitting percentage against Nichols State.

Virginia Tech outside hitter Kaity Smith nabbed the first Freshman of the Week nod of 2017 with 4.69 kills per set and a .349 hitting effort on opening weekend. Smith started her Hokie career with a bang, pounding down 30 kills in her debut against Idaho State, a mark which ranks seventh all-time in Tech history. The Florence, Kentucky, native wrapped up her stay at the Pepsi Panther Invitational with 61 kills, 17 digs and an all-tournament team nod.