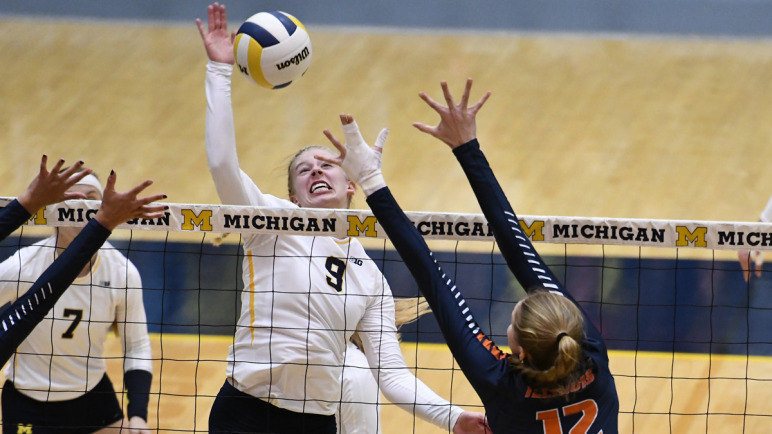 Michigan sophomore MacKenzi Welsh has been selected as captain of Team USA's squad at the U20 World Championships. Archive Photo via Michigan Athletics

The United States has voted University of Michigan sophomore MacKenzi Welsh as the captain of its women’s U20 World Championship team. Khalia Lanier, captain of the winning team at the U20 Pan Am Championships earlier this summer that qualified Team USA for this spot, didn’t make the trip to Mexico with the team. The spot then went Welsh, the second-oldest member of the team, for the World Championships.

The 185cm (6’1″) setter Welsh was named AVCA All-America Honorable Mention last season as a freshman. She was also named to the All-Big Ten Freshman Team and was named the Big Ten Freshman of the Week on 4 occasions.

As a freshman last season, Welsh was one of just 4 Wolverines to play in all 131 of the team’s sets last season, averaging 10.61 assists/set. Her 1390 total assists ranked her 6th overall in NCAA Division 1 volleyball and as the top freshman in the country. The next-highest total by a freshman playing Power 5 volleyball was Duke’s Cindy Marina with 1300.

Last season, Michigan advanced to the Sweet 16 of the NCAA tournament before losing 3-2 to Creighton. She was one of only a handful of freshmen setters to advance her team to the NCAA tournament, and along with Jenna Gray of the national champion Stanford Cardinal was one of only two primary freshmen setters to lead her team to the Sweet 16 (among all setters who ranked in the top 150 nationally in assists).

The United States will begin their tournament on Friday evening in Boca del Rio against Brazil. That will be the final match of the first day of competition.

All Team Captains at the 2017 FIVB Women’s U20 World Championship: