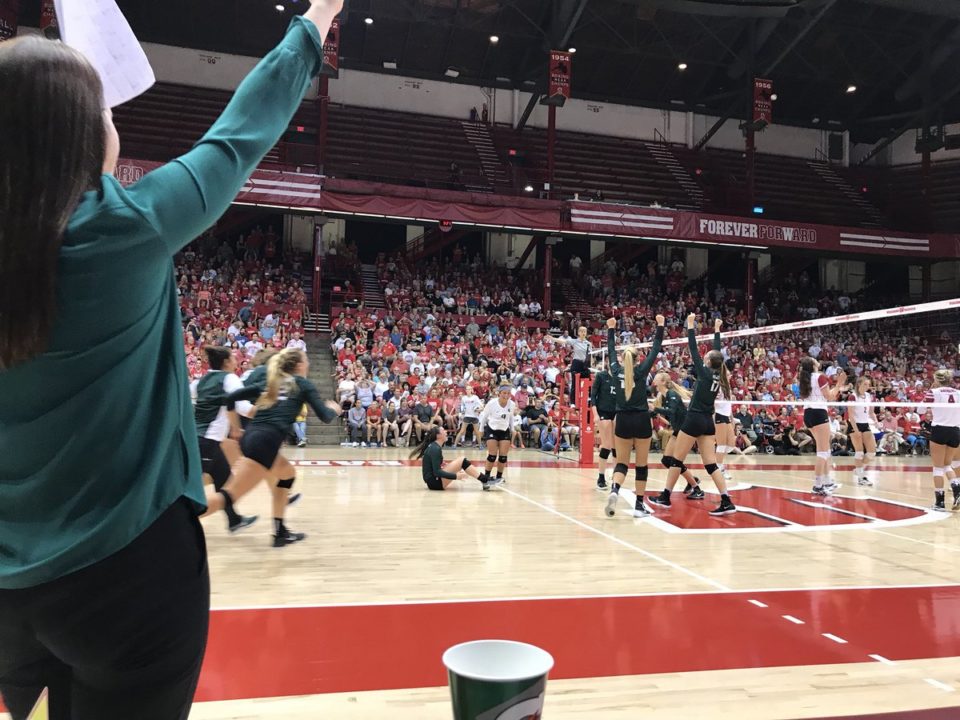 Michigan State raced out to a 7-2 lead in Set 5, with help from two blocks and a kill by senior outside Holly Toliver. Later, after trailing 11-6, Wisconsin cut the margin to two at 12-10 with a 4-1  run. A block by freshman middle Dana Rettke and setter Sydney Hilley and kills from senior outside Lauryn Gillis and redshirt sophomore outside Madison Duello aided the rally. Back-t0-back kills by Kranda put MSU on the hill for the match at 14-10, but the Badgers kept things going with kills by Gillis, senior outside Kelli Bates and Rettke. The Spartans called timeout and turned to Kranda again out of the break, who delivered the final blow in the upset.

After a tie at 4-all in the opening set, Wisconsin scored five straight to pull away at 9-5, taking a lead it would not relinquish. The Badgers poured it on, capitalizing on five MSU miscues and kills by five different players, upping the advantage to 11 at 17-6 en route to the 25–14 victory. The Spartans did scored three straight to narrow the gap to eight at 22-14, but two kills by Rettke and a third by Gillis closed out the win.

Michigan State rebounded in Set 2, going ahead 8-4 early, opening things up with a 6-1 run, including a pair of Toliver putaways. The lead surged to seven at 15-8 on a stuff by Garvelink and Toliver. A block and an ace by Bates put UW within five at 19-14, but it was too little too late as the Spartans scored six of the final 10 to even the match with a 25-18 win. Kranda tallied four kills and a block in the closing stages.

Set 3 featured 10 ties, the last at 16-all, before either team managed to boast more than a three-point edge. A block by Minarick and Megan Tompkins and a UW miscue put the Spartans up 18-16. A stuff by Minarick and Garevlink upped the edge to four at 22-18. MSU posted its fourth block of the stanza as Kranda and Garvelink teamed up to make it 24-21. A Toliver kill two plays later capped the 25-22 Spartan win.

The Badgers forced the decisive fifth set by edging the Spartans 25-22 in Set 4. The teams were level at 11-all before UW built a five-point edge at 17-12 with help from two blocks and a kill by Williams. Michigan State called timeout and cut the margin to one out of the break as Kranda chipped in a block and a kill in the 4-0 run. The Spartans were within one again four times, last at 23-22, but could not break through. A Bates putaway and a MSU hitting error wrapped up the set.

The Badgers suffered their first loss of the season, falling to 9-1, while MSU improves to 8-2. The win snapped a streak of five straight victories in the series for Wisconsin, as MSU picked up its first win since Nov. 10, 2012 over UW.

Brooke Kranda paced the Spartans with 20 kills and four blocks, while the Spartans had two players with double-doubles: Autumn Bailey had a season-high 25 digs and 16 kills, while Holly Toliver had 12 kills and 12 digs along with three blocks and an ace. Rachel Minarick dished out 53 assists and six blocks – two short of her career best in assists and one short on blocks. Meanwhile, Alyssa Garvelink had nine blocks, tying her season best she set in the opener vs. Furman.

For the Badgers, freshman Dana Rettke had 19 kills, hit .412, and had five blocks, a team high for UW. Kelli Bates had a double-double, with 14 kills and 12 digs.

MSU started slow, falling behind by 10 points early in the first set (16-6) and falling by a 25-14 score. The Spartans were able to regroup in the set break, and went up by as many as eight points (19-11) and closed out the frame with a 25-18 win to take a 1-1 stalemate into the locker room at the intermission. The third set was a dogfight, with neither team holding a lead larger than three points until MSU went up 22-18, and then closed it out to take a 2-1 match lead.

The Badgers had lost just one set in their nine non-conference matches, and hit .184 to MSUs .121 in the fourth set to edge the Spartans 25-22, putting up five blocks in the frame to just one for MSU.

In the fifth, it was all MSU early (8-3), and then the Badgers made a late charge – fighting off three match points – to pull within one at 14-13, but Kranda iced the game with her 20th and final kill to seal the win for MSU.

MSU turns its attention to a match at No. 1 Minnesota on Sunday. The contest will air live on ESPN.

QUOTABLE
“We started slow, but I really liked how our older players took charge and settled us down. The Big Ten is going to be tough every night, and with a seasoned team, we were looking for that experience to help us weather those challenges we know that we’re going to face. I’m incredibly proud of how our players executed tonight and can say that this was a really very deserved win.”
– Head Coach Cathy George

Autumn Bailey had a season-best 25 digs and 16 kills

The Spartans opened Big Ten play with a victory, and earned their first victory over a ranked team this season.

The Spartans had played eight three-set matches and one four-setter in 2017.

Wisconsin had lost just one set headed into the Big Ten opener.

MSU and Wisconsin have met just once in each of the last three years, and three of the five matches since the start of the 2013 season have been played in Madison. The Badgers make a return trip to East Lansing on Saturday, Oct. 7 – their first trip to Jenison Field House since Nov. 9, 2014.

GAME REPLAY
SET ONE: MSU had the error bug early, falling behind 12-5 with three early errors, and Wisconsin used their large presence at the net to continuously disrupt any type of rythym that MSU wanted to establish in building to a 17-6 lead, at which point the Spartans called their second time out. MSU was able to get back a bit of their composure and went on a 4-1 run to make it 22-14, but freshman Rettke had two of the final three kills for the Badgers to close it out, 25-14. The 14 points was the fewest for MSU in a set this season. MSU got three kills from Megan Tompkins, and a pair of kills and four digs from Autumn Bailey, but hit .111 with five hitting errors. Rettke had six kills for UW, which hit .414 in the frame (15-3-29).

SET TWO: The first-set jitters for the Spartans appeared to subside in the second, as MSU went up 12-6 on the home team, landing a .492 hitting percentage (8-2-13) . The Badgers called theirfirst time out of the match at that point, and came out of the break with two straight points to trim it down to four. MSU kept its foot on the gas, with Garvelink asserting herself at the net, picking up her second block and a thundering kill to give MSU a 16-9 edge, and forcing the Badgers into their second time out. Up 23-15, the Badgers got a kill from Rettke down the line that they hoped would stall the Spartan momentum. but a big kill from Kranda brought MSU to set point. UW staved it off on a kill by the freshman – her 10th of the night – but Kranda polished off the set win on a block out of bounds for the 25-18 victory. Kranda terminated seven balls in the second set alone, and added a block; Garvelink had three blocks and a pair of kills, as MSU hit .379 to .167 for the host Badgers.

SET THREE: The third set was a dogfight – MSU held its largest lead at 4-1, and Wisconsin held a two-point edge at 7-5 before the teams engaged in a point-for point battle that brought them to a 13-13 deadlock. Consecutive kills gave the Badgers a 15-13 edge, but were undone by a service error. MSU rallied to take its largest lead at 21-18, forcing the Badgers into their second time out – but not to be deterred, Garvelink and Minarick combined on a big block at the right pin on Madison Duollo, and then Garvlink put up the wall again to make it 23-19 in favor of MSU. Kills by Kranda and Toliver iced the win for the Spartans, who hit .243 in the frame and had four blocks to the Badgers one. Toliver was the standout with six kills, while Minarick and Garvelink each had three blocks.

SET FOUR: The fourth set was more of the same from the two teams – both looking to establish dominance, no lead larger than two points, and big swings and big blocks entertaining the capacity crowd. Tied at 11-11, the Badgers threw up back-to-back blocks at opposing pins – Tionna Williams had a hand on both – to go up 13-11 and force MSU into a time out. The Badgers briefly went up four on a Kelli Bates serving run (16-12), and then held a three-point edge as they won the race to 20. MSU trimmed it to one (20-19), but couldn’t get closer as UW closed it out 25-22 to force a fifth set.

SET FIVE: Alyssa Garvelink overcame an early long ball out of bounds to put up three blocks and push MSU out to a 6-2 lead, forcing the home team to call a time out. The Spartans led 8-3 at the crossover, and the ensuing serve from Kranda was an absolute laser that put the Badgers out of system and led to an easy dump by Bailey for a 9-3 lead, forcing the Badgers into a timeout. The Badgers fought to cut it to four (10-6), and then to three (11-8) on a Rettke block. Back-to-back Kranda kills gave MSU a 14-10 lead, but the Badgers fought off match point with three straight kills off tough rallies from Bates, Gillis, and Rettke, forcing MSU to call timeout with a one-point lead, 14-13. Kranda finished it off for MSU with her 20th kill of the night, giving MSU the five-set win.