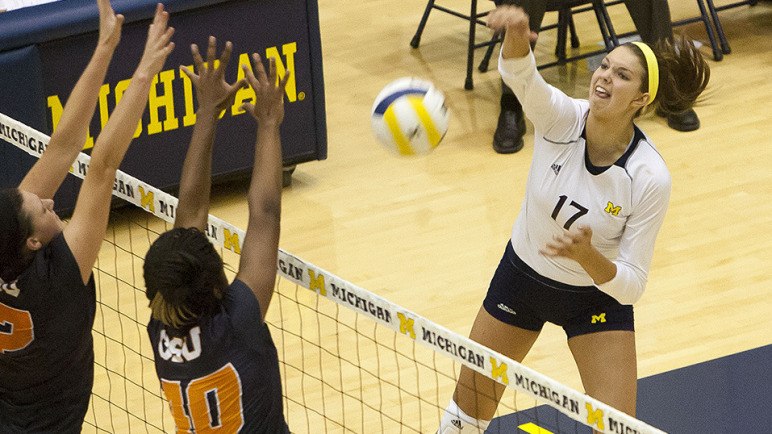 While the video below highlights her fiancé Austin Hatch, a senior with the Michigan men’s basketball team, there is no... Current Photo via Michigan Athletics

While the video below highlights her fiancé Austin Hatch, a senior with the Michigan men’s basketball team, there is no doubt that 2016 women’s volleyball alumna Abby Cole plays a huge part in Hatch’s story and future.

In a tear-jerking and awe-inspiring video posted by CBS Sports titled Austin Hatch Perseveres, Cole talks about how she first heard about and then met her now fiancé as a freshman in Ann Arbor.

He’s a motivator. He’s an inspiration. He’s a Michigan Man.

You may have heard of @umichbball’s Austin Hatch, who survived two plane crashes. For Austin, his incredible story of perseverance is only just beginning. pic.twitter.com/wcIC4USTrZ

Hatch survived two plane crashes growing up one in 2003 and one in 2011, which saw him lose two siblings as well as his mom, dad and stepmom. Brain trauma kept him off the court all four years of his Michigan career, but as the video explains, he never ceased to impact those on the team as head coach John Beilien honored his scholarship despite the long road of recovery he faced.

While the video is mostly about basketball, the Final Four bound Michigan Wolverines and Hatch’s amazing impact on the team without playing in a single game, the story was too good not to share to sports fans of all sorts. Cole’s role in Hatch’s story gave us an additional reason to put it front of volleyball fans.

I mean, is anyone more deserving of a Final Four trip their senior year? pic.twitter.com/re6FAkrxHG