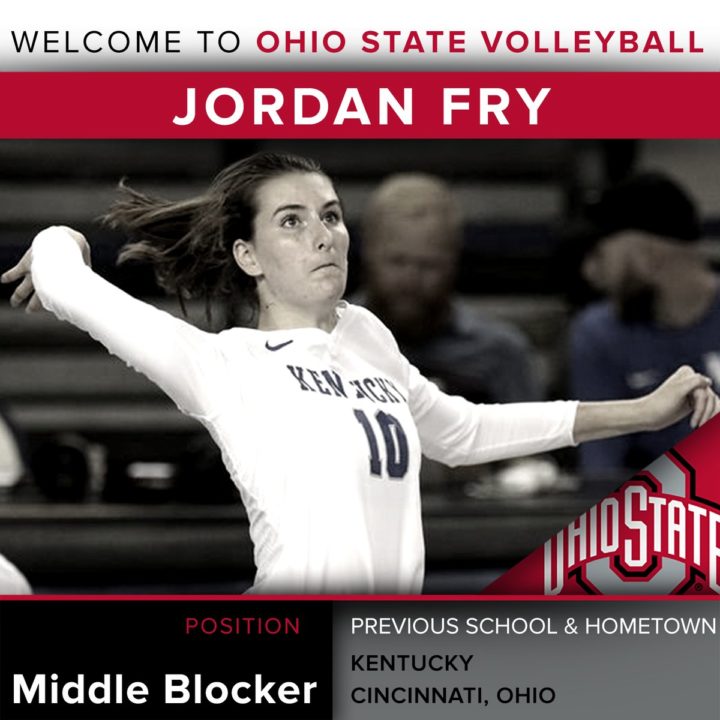 Sophomore middle blocker Jordan Fry has transferred from one of 2017’s breakout teams, the University of Kentucky, to Ohio State for... Current Photo via Ohio State Athletics

Sophomore middle blocker Jordan Fry has transferred from one of 2017’s breakout teams, the University of Kentucky, to Ohio State for the 2018 season. The Cincinnati, Ohio native will be eligible to compete immediately, and should have 3 seasons of eligibility remaining.

The 6’4″ Fry graduated high school in 2016 and redshirted her first season with the Wildcats. In 2017, as a sophomore, she played in 5 sets across 4 matches and recorded 2 kills in 4 attacks plus 2 block assists. Fry saw action against Loyola-Chicago, LSU, Mississippi State, and Texas A&M.

She was mostly stuck in the rotation behind Kentucky’s star middle blockers, including Kaz Brown and Emily Franklin, the team’s two starting middle blockers who are both graduating. The Wildcats were already going to be thin at the position in 2018. Of the 4 middle blockers on their 2017 roster, 2 have graduated, and Fry is now transferring. That leaves freshman Kendyl Paris as the only returning Wildcat middle blocker – she played in 5 sets last season.

Kentucky brings in 1 middle blocker among 3 signees in their incoming freshman class – Gabby Goddard, a 6’2″ middle from Lexington Massachusetts. They may also be forced to move 6’5″ senior-to-be Brooke Morgan back from opposite to middle blocker. The Wildacts, who return Leah Edmond and Avery Skinner as 6-rotation pin-hitters next season, have plenty of offense, but could benefit from Morgan’s size in the middle to keep opponents honest at the net. Morgan played at middle blocker as a freshman before moving to opposite in 2016 as a sophomore.

“It’s so great to get Jordan into our family,” said Ohio State head coach Geoff Carlston. “She fits in perfectly with our program academically and will make an impact right away with our team.”

She joins a deep, and young, Buckeye blocking corps. The team was lead in blocks last season by freshman Lauren Witte (1.73 k/set, 1.01 blocks/set). Sophomore Madison Smeathers was the other starter in the middle, and averaged .72 blocks/set. Both players hit over .300 on the season.

Ohio State finished 11th out of 14 teams in the Big Ten last season in blocks-per-set. They finished the season with a 15-16 record (8-12 in the Big Ten, 9th place), which meant they were ineligible for the NCAA National Championship tournament. Kentucky finished the 2017 season as SEC Champions with a #4-overall national seed for the national championship tournament. They lost to eventual national champions Nebraska in the regional finals (Elite 8).