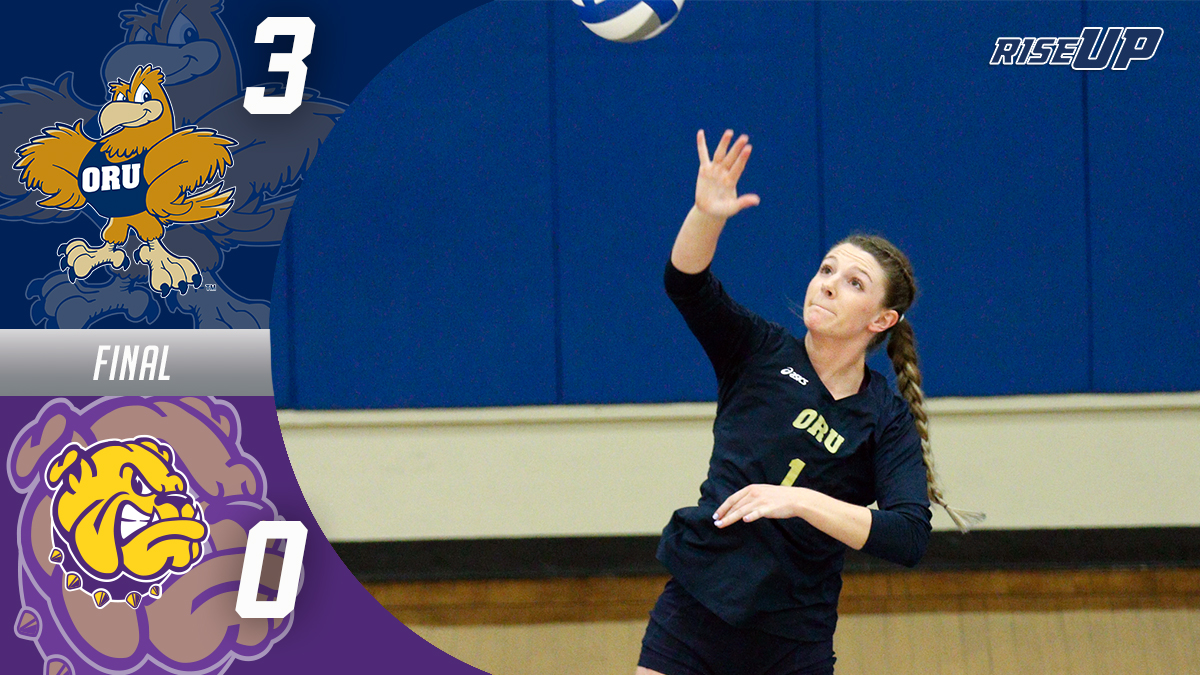 MACOMB, Ill. – Senior outside hitter Laura Milos served up 10 aces and the Golden Eagles hit at a .417 clip as a team in a quick hour and 14 minute sweep of Western Illinois on Sunday.

Milos wasn’t just on target from the service line, but also at the net, downing a match-high 15 kills, and in the backcourt, just missing a triple double with nine digs. Sophomore outside CeCe Madison also managed 15 kills for ORU, while hitting at a .407 clip and adding eight digs. Senior middle blocker Shelby Cox rounded out the offense with seven kills on a .545 hitting effort. Junior libero Tori Roe served up the team’s remaining two aces, while notching a team-best 11 digs.

ORU jumped out to a 13-3 lead in Set 1 as Milos served up four aces, including three straight, and Madison put down three kills. Three straight miscues slowed the Golden Eagles, but the team recovered with eight of the next 10 points, including a trio of Milos putaways, to push the margin to 11 at 21-10. A Madison kill gave Oral Roberts a 24-14 advantage, and another three points later wrapped up the set.

After a tie at 8-all in Set 2, the Golden Eagles blazed their way to a 25-12 win. Eight kills, three Milos aces and three blocks aided the 17-4 run as did three WIU miscues, including the set clincher.

Cox got Oral Roberts off to a good start with four kills in the first five points. ORU pushed its lead to eight at 11-3 with two more perfect serves by Milos. Kills by four different players and a Roe ace lifted the margin to 12 at 19-7. Milos turned in two kills and her final ace to make it 23-9. A service error and a Cassie Hunt ace kept WIU in the game, but a service error and a Bri Greenlee putaway closed out the sweep at 25-11.

The Oral Roberts volleyball team served scoring runs all afternoon to put away Western Illinois in straight sets (25-16, 25-12, 25-11) on the road Sunday at Western Hall.

Laura Milos led the way with 10 service aces, the most by a player in a single match this season in the NCAA, to help keep the Golden Eagles in first place in the Summit League standings. Tori Roe added two aces for 12 as a team to equal the most by ORU in an outing this year.

A serving run by Milos helped the Golden Eagles to an incredible 11-straight points in the opening set, including three service aces from the league leader in that category. The senior served ORU to another strong push in set two with three more aces during a 10-1 stretch and a 6-0 start to the final stanza set the tone for the sweep.

Up Next
The Golden Eagles return home for their next two matches at the ORU Aerobics Center starting Friday night hosting North Dakota State at 7 p.m. Full coverage will be available for free on the ORU Sports Network with live video and stats.

The Leathernecks started out the first set up 2-1, but early momentum hindered as Oral Roberts put together 11 straight points. The Purple and Gold responded, winning four of the next five points. Down 22-12, Western made it 24-16, but Oral Robert’s CeCe Madison recorded the final kill to lift the Golden Eagles in set one.

Shiah Sanders recorded the first point on her first swing of the set to put the Leathernecks up 1-0.  After three Golden Eagle points, Western answered with five of the next seven points which included kills by Emma Norrisand Riley Schumacher. Oral Robert’s Lucija Bojanjac recorded a service error that tied up the score at eight a piece. An Emma Norris kill pulled the Leathernecks to within one at 11-10, but Oral Roberts won 14 of 16 points to finish the set.

Trying to force a fourth set, Western couldn’t find momentum in the third set and fell 25-11. In the match,Mackenzie Steckler and Norris let the team with five kills set. Playing libero, Shalyn Greenhaw led the team with six digs. Jaime Johnson had a team high 11 assists.

The Leathernecks take the court at Omaha on Oct. 27 at 7 p.m.